Could you build the Empire State Building out of wood?

Not just a tabletop model, mind you — but the whole 102-story, 87,000-square-foot skyscraper, covering a New York City block at its base, and for 40 years the world’s tallest building at 1,250 feet?

Of course you could, say the Vancouver architect Michael Green and the Finnish engineers at Metsä Wood. And it would be a good idea — economically, environmentally and, not least, aesthetically.

Green has a significant following in architectural and construction circles for championing wood as a preferred alternative to concrete and steel for large buildings; my MinnPost colleague Peter Callaghan has written about his design for a seven-story office building that Hines Interests hopes to build in Minneapolis’ North Loop.

Metsä Wood, for its part, has earned a global reputation for quality and creativity in turning the world’s oldest construction material into some of its newest and most beautiful building components.

So their collaboration on a re-imagined Empire State Building, with additional technical input from Equilibrium Consulting, has been getting considerable attention in architectural and construction-trades publications — not to mention an admiring write-up last week from architecture columnist Philip Oldfield of the U.K. Guardian.

Here’s the point that Green and Metsä are trying to drive home with attention-getting images like the one you see above:

The world is going through a high-rise building boom, using materials and construction methods essentially unchanged since “skyscraper” came to mean a steel-and-concrete office tower (as opposed to a mast-topping sail on a square-rigged ship; Ian Fleming fans, see also “moonraker.”)

At the same time, we’re continuing to load the atmosphere with globe-warming carbon dioxide. And while high-rise construction by itself isn’t among the biggest contributors, steel- and cement-making are fairly carbon-intensive.

So substituting wood offers some significant offsets, including: 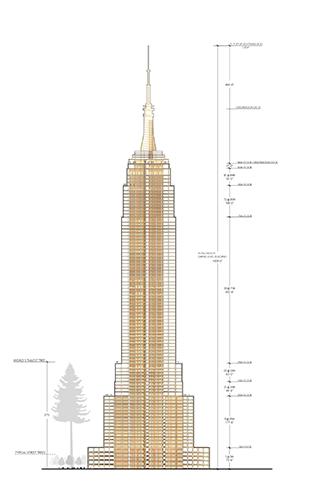 Courtesy of Metsä Wood
Trees in the Pacific Northwest routinely grow to 30 or 40 stories in height. The Empire State Building re-conceived in wood would be a bit taller. (Click for larger version of diagram.)

If you pause to think about it, it’s actually kind of strange that nowadays a merely seven-story wooden building like Hines’ T3 project should qualify as a paradigm-breaker and national first of its kind. Especially in a region that owes its existence in large part to lumber production.

After all, as Michael Green is fond of pointing out, trees in the Pacific Northwest routinely grow to 30 or 40 stories in height. And in a sort of manifesto entitled “The Case for Tall Wood Buildings,” he notes that:

Tall wood buildings are not a new concept. 1,400 years ago tall pagodas in Japan were built to 19 storeys in wood and still stand today in high seismic, wet climate environments. Several countries around the world have a history of building Tall Wood buildings. In Vancouver’s Gastown neighbourhood 7 and 10 storey heavy timber buildings have stood for the last hundred years.

Only somewhat newer is the notion of materials Green calls “mass timber,” which you could think of as plywood multiplied: laminated panels, beams and trusses of wood-fiber sheets pressed and glued together for almost limitless potential variation in weight, strength, flexibility, weather resistance and finish.

Even more important — and here’s where Metsä comes in — the panels can be made to order near the wood sources and shipped in finished form to the construction sites, ready to be assembled with custom fasteners of a type familiar to anyone who has ever assembled an end table from IKEA.

For a 35-story building that Green has designed as part of a Parisian project called Baobab, the panels would be nearly 16 inches thick; for the Metropol Parasol project already built in the Spanish city of Seville, Metsä supplied laminated components up to 54 feet long, in thicknesses from 2½ to 12 inches.

Still, as Green told the Guardian’s Oldfield, because “their manufacture is very accurate, there’s very little work that needs to be done on site. Because of this, construction will be very quick. Someday I’d like to make a building where all you need is a giant Allen key to put it together.” 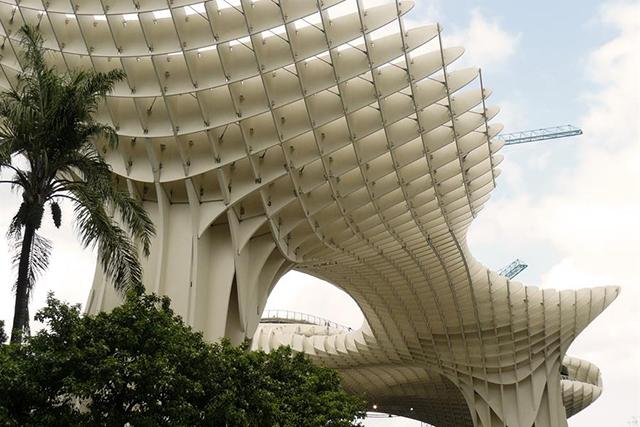 Courtesy of Metsä Wood
The Metropol Parasol project in Seville, Spain houses an archeological museum and farmers market as well as bars, restaurants and terraces.

So, what about fire?

One of tall wood’s public relations challenges is the assumption that wood skyscrapers can’t be made fire-safe. Oldfield’s take is that “there’s a huge difference in terms of physical properties between mass timber, such as cross-laminated timber, and the lightweight timber frames that are perceived as being susceptible to fire.”

When mass timber is exposed to fire, the outer layer starts to burn and form charcoal. The charcoal layer forms a protective barrier, soaking up heat and insulating the interior timber. As exposure to fire increases, this layer grows, creating even more insulation, and further slowing the burning rate.

In timber towers the thickness of the charcoal layer that would form in a fire can be predicted. To protect the structural integrity of the timber, this same thickness of wood can be added to the CLT sheets. This would form a sacrificial timber barrier which would char in a fire, and in doing so, protect the material within.

“It’s mother nature doing what she does best,” says David Barber, a principal fire protection engineer at Arup in Washington, D.C., and an author on a report on the fire safety challenges of wood tall buildings. “In the aftermath of a forest fire you’ll see trunks of trees that are black and charred. The timber inside the charcoal layer is still alive – after a fire you will see regeneration. This is the same physical property we utilise in timber towers.”

Steel-and-concrete towers are also vulnerable to fire, of  course, because those materials lose strength to extreme heat. Metsä had the good taste not to mention a couple of towers that burned in Manhattan while all the world was watching, but it did make this comparative observation about an Empire State Building constructed with its Kerto panels:

In the event of a fire, Kerto LVL performs more predictably than many non-combustible materials…. To achieve the fire ratings required for a 102-story building, additional fire protection would still be required in the form of sprinklers, and drywall, but many parts of the wood structure could remain exposed.

In contrast, the steel structure of the Empire State Building needs to be fully protected by insulation, drywall, stone and other fire resistant materials to provide safe resistance to fire.

Now, nobody really expects to see the Empire State Building rebuilt as a plyscraper.

Green and Metsa are out to prove a larger point about wood as a high-rise material; having taken the Empire State project through the conceptual phase, they’ve begun a technical design to yield detailed projections of costs, construction time and environmental benefits.

For Metsä, it’s part of a multistage demonstration project called Plan B that has already imagined the Colosseum of ancient Rome resurrected in mass timber, with other iconic buildings to come.

They’re working real-world buildings, too — if not on the monumental scale of Empire State, then certainly larger than most of us have thought possible with wood. 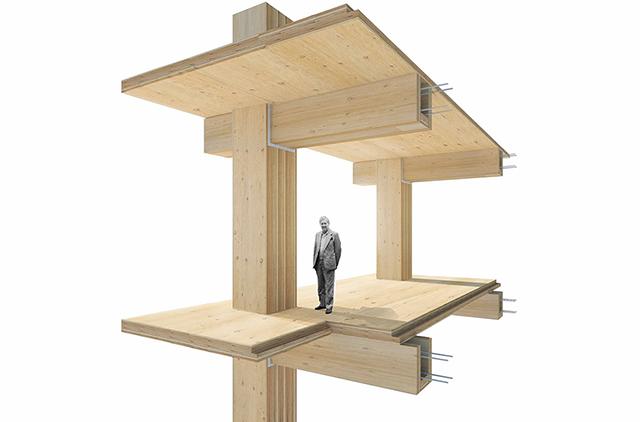 Courtesy of Metsä Wood
Metsä uses modular construction, with columns as tall as six stories, box beams tied together with cable, and horizontal panels up to 8 feet by 82 feet, in varying thicknesses.

How tall can you build with wood? Consider this 1,250-foot ‘plyscraper’