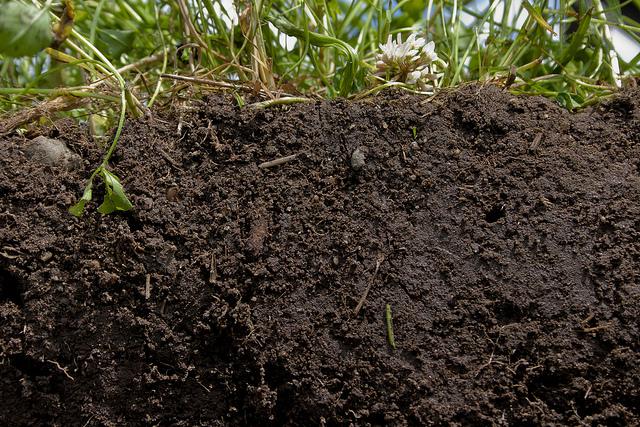 CC/Flickr/Natural Resources Conservation Service Soil Health Campaign
Soil may be one of the four cornerstones of human life on this planet – with sunlight, water and breathable air — but outside certain specialist communities, it gets substantially less attention.

Did you know that 2015 is, by decree of the United Nations General Assembly, the International Year of Soils?

I thought not, but can hardly blame you. Soil may be one of the four cornerstones of human life on this planet – with sunlight, water and breathable air — but outside certain specialist communities, it gets substantially less attention. Underfoot is undervalued, I guess.

Also, undercovered. One challenge facing the UN Food and Agriculture Organization is how to draw press attention to the pressures on this critical resource, despite some fairly alarming statistics assembled for the kickoff announcement last December:

And yet we continue to treat our soils pretty much like dirt.

I struggled awhile to resist that observation, which is far from original, and finally gave up because it is so perfectly apt.

There is of course a vast difference between soil and dirt, and difficulty in grasping the distinction may actually go a long way to explaining humanity’s widespread tendency to turn the page when the subject is soil.

One way to grasp the distinction to think of dirt as the nonliving, inorganic mineral components of soils  – the bits of sand, rock, clay and so on sometimes called the “mineral soil,” as in describing the upper layers after sterilization by wildfire.

These materials provide infrastructure for arrangements of soil’s other main components – water, organic matter and a wide range of living organisms, from microbes to large invertebrates.

Put it all together and you have something that looks less like a single resource, let alone a simple one, and more like a complex, dynamic and even fragile community.

(There are organic farmers who refer to their husbanding of these communities, without evident irony, as “microherding.”)

Some scientists draw an additional distinction: Soil is a community in the place where it formed and/or where it belongs; dirt is what’s left after soil is disturbed, its functions disrupted, and its lifeless remains scattered by wind and runoff.

So: a clump lifted by hand from a farm field is soil; a like amount lifted as silt from the bottom of Lake Pepin is dirt, even if its travels have added a few new microbes and bits of decayed vegetation.

All across the landscape we’re busily turning soil into dirt and paying the problem very little mind.

How many harvests remain?

I will wager that even among Minnesotans who have followed closely the last year’s conversation about an aggressive new buffers program as a way to protect water and conserve soil in place, there may be some eye-openers in these excerpts from a piercing analysis by Britain’s George Monbiot:

To keep up with global food demand, the UN estimates, 6 million hectares (14.8 million  acres) of new farmland will be needed every year. Instead, 12 million hectares a year are lost through soil degradation. We wreck it, then move on, trashing rainforests and other precious habitats as we go.

The techniques that were supposed to feed the world threaten us with starvation. A paper just published in the journal Anthropocene analyses the undisturbed sediments in an 11th-century French lake. It reveals that the intensification of farming over the past century has increased the rate of soil erosion sixtyfold.

There are many excellent cultivators who seek to keep their soil on the land. There are also some terrible farmers, often absentees, who allow contractors to rip their fields to shreds for the sake of a quick profit. Even the good ones are hampered by an economic and political system that could scarcely be better designed to frustrate them. [emphasis added]

The news from Madison

Here in the States a leading voice on these issues is the Soil Science Society of America, headquartered in  Madison, Wisconsin.

It’s a significant contributor, too, to a global awareness campaign associated with the UN efforts, busily turning out articles, news bulletins and videos with enough variety to serve audiences ranging from schoolkids and teachers to policy-minded citizens to scientists.

There are monthly themes this year, and July’s is “Soils Are Living.” One report discusses new research on how certain nitrogen-fixing soil bacteria and fungi serve plants in the same way “probiotics” can boost the nutritional effectiveness of human diets.

Researcher Sharon Doty at the University of Washington found nitrogen-fixing soil microbes within the root tissues of poplar and willow trees, enabling them to grow large and lush despite rocky, nutrient-poor soils.

These organisms, known as endophytes, were isolated and then transferred to lab-grown rice plants rooted in watery conditions.

The result? Larger and taller plants with fuller root systems — despite limited nitrogen conditions in the greenhouse…. And the environmental payoff? Thanks to these bacteria fixing nitrogen for the plant, farmers could use less chemical fertilizers to give plants the nitrogen they need.

Because runoff from these fertilizers can be harmful to surrounding ecosystems, being able to use less is great news and can even decrease greenhouse gas emissions, added Doty. “This research offers the potential alternative for chemical fertilizers in crop production, thus aiding sustainable agriculture with minimum impacts on the environment.”

And the researchers believe the benefits aren’t limited to rice, either.

It’s the International Year of Soils — can we quit treating this resource like dirt?