The Canadian forest fires that have been sending haze across Minnesota for nearly a month, and prompted a statewide air-quality alert yesterday afternoon, are part of a pattern of unusually early, fierce and widespread fire outside the typical wildfire zone.

This year, forests are burning in a swath from central Saskatchewan to coastal Washington state and Alaska. And the abnormally hot, dry conditions enabling them are predicted to last another month at least, probably more.

As of Monday, according to the CBC, Saskatchewan had 112 active fires across the province, bringing the year-to-date total to 569. That’s nearly three times the tally for 2014, and the acreage in flames is 10 times a normal year’s.

The newest fires near La Ronge, toward the northern fringe of settlement in the province, prompted evacuation of 8,000 more people, bringing to 13,000 the number waiting out the battles in emergency shelters — the largest evacuation in provincial history. More than half of them had to be lodged in neighboring Alberta.

In Washington state, which for weeks has been battling fires on the eastern, drier side of the Cascades in places like Wenatchee, new fires were breaking out in the rain forests of the Olympic peninsula. 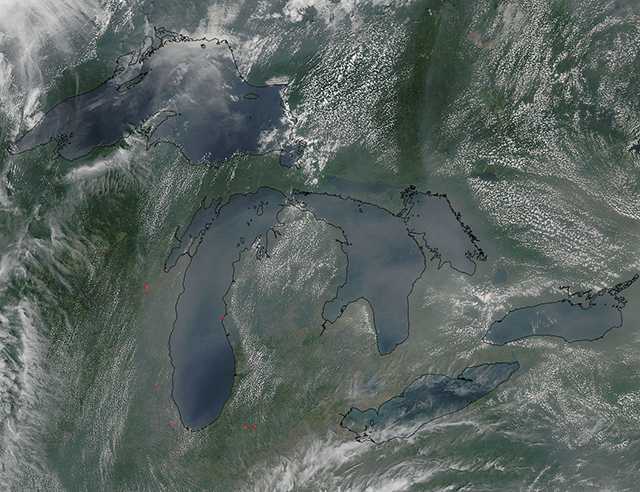 In a compelling feature that appeared over the weekend, Maria La Ganga of the Los Angeles Times told how the Sleepy Hollow fire had bested every protective measure some residents had taken – fireproof shingles, brush management, special sprinkler systems – and  “sent a terrifying message” across the Wenatchee Valley and beyond:

Normally soggy Washington — nicknamed the Evergreen State for good reason and home to the wettest town in the Lower 48 — has never been hotter or drier at this point in the year, officials say, and the fire season has never begun so early or so fiercely. …

The timing couldn’t be worse. The snowpack is gone. Heat records are being broken statewide. More than three-quarters of Washington’s rivers and streams are running at below-normal levels, nearly half of them at record lows. Trees and grasses — wildfire’s favorite fuel — are as dry throughout the state as they normally would be in August.

Though climatologists are saying this summer’s conditions in the Pacific Northwest can be explained by short-term patterns, there is little doubt that the long-term trend is for more of the same.

Fire in a rainforest

On Sunday, writing in the Seattle Times from the other side of the Cascades, Hal Bernton described the conditions that gave rise to the Paradise Creek fire in Olympic National Park, where a typical year’s rainfall is 200 inches.

Ordinarily, he wrote, hikers in the park would be wading waist-deep to cross the Queets River; this year the flow is ankle-deep and swimming-pool warm.

The fire started after a warm winter prevented most of the snowpack from forming, followed by an exceedingly hot, dry spring that primed the forest for ignition. The result of this unusual alignment is what now ranks as the largest fire since the park was established, and might burn through the summer….

On the western side of the Cascades, there is more uncertainty about how climate change will affect fire cycles. Major fires have flared in the past on the Olympic Peninsula and elsewhere. These burns are more infrequent, however, so there is less information to base future forecasts upon. But if the snowpack in this region shrinks due to warmer winters, fires are expected to be more frequent.

“If we get the kind of temperatures that are projected, we will see more fires on the west side, and we will have longer fire seasons. I think that it’s inevitable,” said David Peterson, a biologist at the Forest Service’s Fire Sciences Laboratory in Seattle.

The geographical pattern of this year’s wildfire pattern is unusual but not unexpected. In testimony before Congress in early May, U.S. Forest Service chief Tom Tidwell said the entire north-central portion of the United States was facing above-normal patterns of wildfire this year.

He also said the Forest Service expected to spend $1.225 billion fighting fires this year – more than the 10-year rolling average and about three times the outlays that were typical in the 1990s.

Bad fire seasons continue, too, in more traditional regions; California has already gone more than 1,000 fires above average for an entire fire season, a mark that wasn’t reached last year until September.

I learned that from a perspective piece in the Washington Post last week, wherein Will Greenberg also noted that

It’s not unusual for the Eastern Sierra area of California to see snow during a typical February. What is highly unusual is having one of the largest wildfires of the year during that month, destroying 40 homes and kicking off a historically early wildfire season. [That was the Round Fire, in the eastern Sierras north of Yosemite.]

Cal Fire, one of the main organizations that handles wildfires in the state, responded to nearly 300 incidents last week alone.

And large wildfires are burning where they normally wouldn’t, such as the Lake Fire in San Bernardino County. Covering over 30,000 acres and burning for nearly two weeks, it’s the largest wildfire of the year but also the first for the area ever in recorded history. …

The current wildland fire outlook from the National Interagency Fire Center, issued on Wednesday [PDF], anticipates above-normal patterns of significant fire through August in a great backwards-comma swath starting in Idaho – where fire drove a disaster declaration in two counties on Monday – and curling through Washington, Oregon and most of California.

Normal fire patterns are now the official outlook for most of the upper Midwest, including most of Minnesota; a good-sized southern chunk of the state is rated below normal for fire risk now, but only through July, when normal conditions are predicted to return. 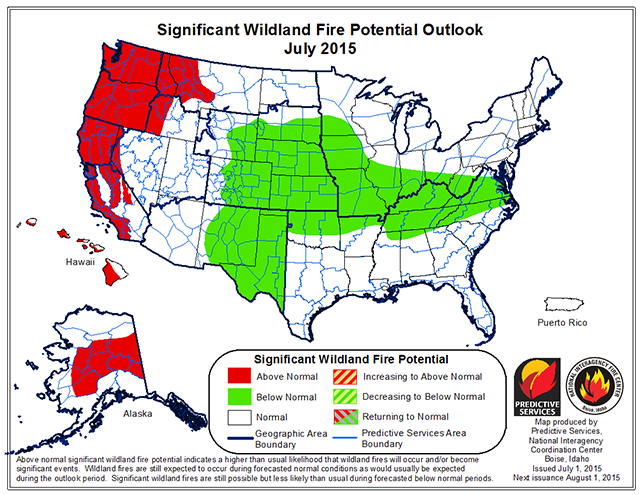 National Interagency Fire Center
Normal fire patterns are now the official outlook for most of the upper Midwest, including most of Minnesota.

Note that about half of the Alaskan interior is also at above-normal fire risk in the NIFC forecast, again through August, a reflection of fire patterns that are likely to break records set in 2004.

And that poses a special, climate-related problem according to Brian Kahn over at Climate Central, who wrote last week that concern goes beyond timber loss to the possibility of massive carbon releases from soils in burned-over areas, and from peat fires as well.

Despite covering slightly less area than tropical forests, boreal forest soil stores three times as much carbon as its tropical counterpart. They currently operate as carbon sinks, taking up more carbon than they emit each year. Wildfires could flip the script, though. …

“Up until about 10 years ago, the prevailing dogma was peatlands just didn’t burn,” Merritt Turetsky, an ecologist at the University of Guelph, said. “They were way too wet and fire played little to no role in these ecosystems. Over time, we’ve seen that just isn’t true.”

Which makes this year’s pattern a special attention-getter.

“As the sun comes up on July,” Kahn noted, Alaska’s 297 active fires, covering 1.8 million acres, were well above the long-term average and pushing the state toward a record-setting fire pattern.

“The 2015 season here in Alaska is day by day progressing to be a truly outstanding fire year relative to our rather brief historical record of annual area burned (1950 is as far back as I feel provides rather accurate numbers),” Scott Rupp, a fire ecologist at the University of Alaska, Fairbanks, said in an email.

A recent Climate Central analysis shows that over that period, large wildfires in Alaska have essentially doubled, including a large increase since 1990. Wildfire season is 40 percent longer than it was in the 1950s, now stretching 35 days longer.

Much of that can be tied to rapid warming in the northern reaches of the globe, which has warmed more than twice as fast as the rest of the planet. In the past 60 years, Alaska has warmed about 3°F with similar warming rates in northern Canada.