I dawdled my way through Saturday morning, I admit, luxuriating in that fresh, cool clarity that trails a potent summer storm like the howler that rolled over our region last Friday night, sweeping the climate clean.

Sallie and I were getting ready for two days of sailing on Lake Pepin, and over breakfast she mentioned that the wind woke her at 2 a.m. The lightning was so close and frequent that she read for a while by the flashes through our bedroom skylight. Had I even noticed the gale?

Of course not. I have the enviable though sometimes annoying gift of being able to sleep unawares through storms that sound like the proverbial freight train rolling by the house.

Even more luckily, in sailing season, I sleep soundly through the thunder and horns of actual freight trains passing within a block of our slip at Pepin Marina, a scone’s throw (sorry) across the tracks from the Harbor View Café.

As I finished loading the car, I thought to check the straw-bale garden to see if high winds had done any harm. But everything remained staked and tied and I made a mental note that a meal centered on Swiss chard, Japanese eggplant and two kinds of basil could be on the menu when we got back.

We buckled up and ran through the departure checklist, tick tick tick, as I started the engine, turned the car around … and saw for the first time the huge oak tree lying shattered in our path.

Bigger around than I am, and formerly more than 50 feet tall, it lay but a few strides beyond the garden –  invisible until now. 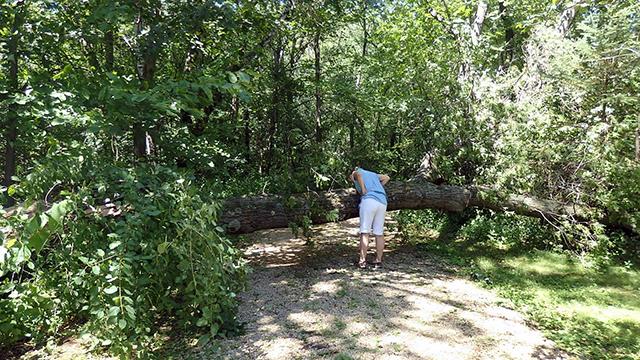 MinnPost photo by Ron Meador
Sallie surveyed the fallen tree and concluded we wouldn’t be going sailing for a while.

The joys of the semi-rural life

When the question “What do you miss about city life?” comes up, my answer is easy and always the same: Walking seven blocks for an iced coffee, dinner fixings, a library book.

But sometimes the question instead is, “What do you like about living in the woods?” And there I am likely to be at a loss because the truthful answer is: Pretty much everything. Seriously.

Nearly every aspect of our semi-rural life is different in some fundamental way, mostly though not always for the better.

It’s not so much that life is simpler (though usually it is) or easier (fairly often it is not). It’s just more interesting, year in and year out, and also instructive, in ways well illustrated by Saturday’s tree across the driveway.

Were I were still living in southwest Minneapolis – where I experienced a few tree-felling windstorms over the years – the blockage would have been, in some ways, less of an obstacle. I could walk to the store, bike or bus to work, until somebody came and cleared it.

But who would that somebody be? Was this the city’s problem to solve, or mine? How do you find the proper tradespeople for this job? How do you reach them on the weekend? How long will it take? How much should it cost? And so forth.

In Skunk Hollow, the big question for me was: What shape was the chainsaw in when I put it up last fall? And for Sallie: Can we find a neighbor to come over with a second saw?

A neighbor with a chainsaw

Fifteen minutes later, Brian was rolling up the driveway on his ATV with an 18-inch Stihl borrowed from his brother-in-law Jon.

Jon and his wife, Kim, are our next-door neighbors to the north. Brian and his wife Kelli, who is Kim’s sister, live one house beyond them. Despite the proximity and all the comings and goings we rarely see one another, even at a distance, and on the street in Hudson or Stillwater, Brian and I might have passed as strangers: he hadn’t seen me in my beard, and I hadn’t seen him since he took to shaving his head.

Brian is a cheerful, energetic guy by nature and in a flash he was climbing around in the branches as I surveyed the wreckage along the ground.

Exploring together, we found that what had fallen was a limb amounting to the second trunk of an oak tree measuring about 30 inches thick toward the base. Starting about 10 feet up, it had been ripped down and away almost to the root, twisting as it fell.

Already I was counting the complications.

It’s more than possible to get killed doing this kind of work – there was a notable, sad example hereabouts a few years ago – and impossible, at least to someone of my thin experience, to anticipate all the ways it can go suddenly wrong.

So as we discussed alternative approaches, I was equally impressed by (a) the force required to tear so much timber loose, and (b) the residual force that might still be stored in its incomplete twists and splits, waiting to be set free by a pair of amateur loggers.

Then there were the portions suspended high in the air by other trees, from a stately birch to clumps of springy buckthorn.

As Brian prepared his saw, I topped our 16-incher up with gas and bar oil and pulled the cord. It started right up, but when I put it to wood it produced a trickle of fine sawdust instead of the spray of fat chips that tell you your cutters are sharp.

Happily, I had two backups still in their bags from last fall’s sharpening service.

I cut a few big limbs to take weight off the trunk, then started on a split in the main section. Without the usual warning tremor, the wood shifted and trapped the bar. Damn damn damn.

But Brian’s saw was humming now, also with a new chain, and I backed him up here and there with wedges and a peavey. Our goal was only to get the driveway clear, not to cut the stuff to splitting length, and though the work was sweaty and dirty it was also entirely pleasant. 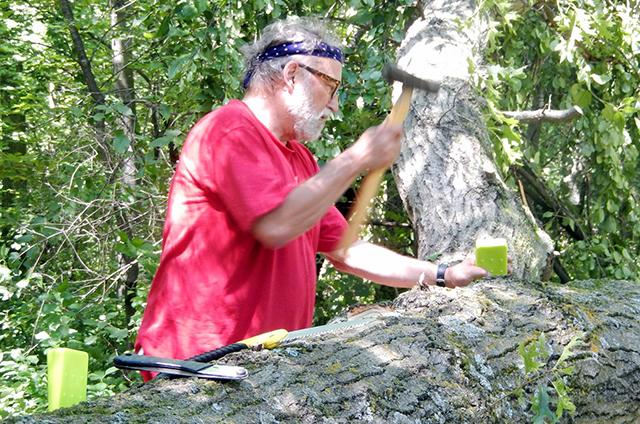 Photo by Sallie Anderson
Setting wedges in a cut.

Brian plays in rock bands, among many other pursuits, and when the saws were still our conversation ranged all over, from classic Fender guitars and basses, to their restoration with automotive finishes, to sailing and fishing and home brewing and the whiskeys of Islay, the continuously variable transmission, how he and Kelli are driving two new subcompacts for car payments less than what they’d been spending on gas for two SUVs.

At one point I was amused to note that Brian, the musician, wore hearing protection while he was on the saw, while Ron, the writer, wore safety glasses. Together, I suppose, we added up to one safety-conscious chainsaw operator.

But no fingers were lost nor blood spilled in the course of our adventure, and in two hours, give or take, Brian was packing up his saw and heading back home. Two hours after that, including a break for lunch, Sallie and I were at the slip and getting ready to sail into the sunset.

In Minneapolis, I might have still been phoning around to hire help.

The bucking and splitting work remains, of course, but it can wait.

Brian brought me Jon’s offer to lend his hydraulic splitter, should I tire of the old-fashioned approach with wedge and maul.

I mentioned to Brian that I’d been meaning to call Jon about another fallen oak near our property line, to see if it was mine to cut up; he laughed and said Jon had been wondering the same thing. So there’s likely another woodcutting project in store for two or all three of us, sharing in the proceeds. 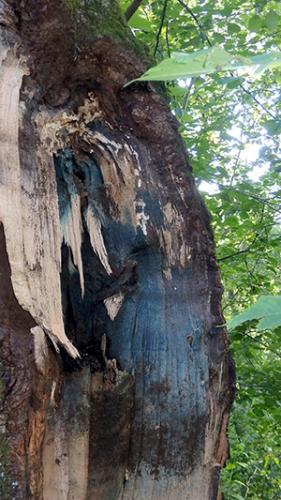 MinnPost photo by Ron Meador
Is this stain caused by iron deposits?

Meanwhile, I got curious about a strange, blue-black stain I noticed Wednesday in the place where our oak had split apart.

It reminded me of the blue stain visited on pines in the West by beetle-born fungus. But in oak trees, I gather, it’s typically a result of iron deposits, often from some kind of hardware placed in a growing tree. Further (and cautious) investigation with a chainsaw may solve that mystery. Or not.

As for the home heating dividend of Saturday’s windfall, I found an online calculator, took some quick measurements and derived an estimate in the vicinity of 92 cubic feet, or about the typical volume of firewood in a full cord!

Not a bad payoff – and it carries, too, the prospect of pleasantly reliving Saturday’s neighborly adventure in country living, fire by fire, through the cold months ahead.

Letter From Skunk Hollow: A bad storm, a good neighbor and a firewood bonus