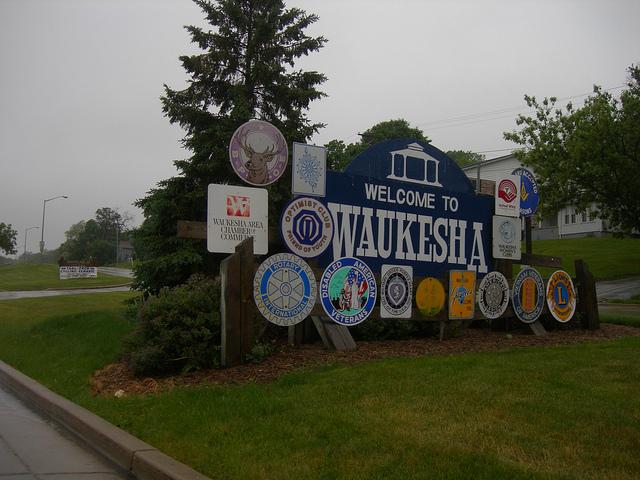 CC/Flickr/Jimmy Emerson, DVM
Much of Waukesha’s municipal drinking-water supply is drawn from deep, sandstone aquifers where the water unfortunately contains high levels of radium, a carcinogen that is difficult to remove.

The Waukesha Water Utility’s campaign to stick a giant straw into Lake Michigan has won a critical endorsement from Wisconsin’s Department of Natural Resources, hastening the first critical test of a 2008 ban on exporting water from the Great Lakes to places beyond their basin.

It’s hardly a new idea; Waukesha has had its eye on the lake for decades. And it’s not that the city wants a whole lot of water – perhaps 10.1 million gallons a day, on average, by mid-century. It will even give most of it back, treated.

But if it succeeds in staking this claim, based on a narrow-sounding exception in the rule against out-of-basin diversions, Waukesha will become the first municipality entirely outside the basin to be granted rights to Great Lakes water. And that will set a precedent that hundreds of other communities across eight states and two Canadian provinces could point to and say:

Hey, what about us?

The surface of the Waukesha case is simple and even sympathetic. Much of the municipal drinking-water supply is drawn from deep, sandstone aquifers where the water unfortunately contains high levels of radium, a carcinogen that is difficult to remove.

The city has been under state or federal orders to bring its drinking water into compliance with safety standards on radium since at least 2003, and since 2006 it has been missing deadlines for doing so.

Indeed, Waukesha has already said it will miss the current deadline, which is June 2018, even if it wins the necessary approvals to build the new system, which would take some time and cost more than $200 million.

Approval might take some time, too: Signoff is required from each of the eight states of the Great Lakes Compact – Illinois, Indiana, Michigan, Minnesota, New York, Ohio, Pennsylvania and Wisconsin – and also, practically speaking, from the provinces of Ontario and Quebec, which have considerable influence but no actual vote in the matter.

Out-of-basin transfers have become difficult since 1986, when U.S. law required replacement of diverted water, and almost impossible since Congress approved the compact and its new rules in 2008.

However, those rules allow an exception to be made for a community that meets certain tests, the chief ones being these:

Although Waukesha’s contentions on all but the first point are challenged by opponents of the diversion, last Thursday’s DNR announcement gives it Wisconsin’s tentative blessing on all points. Also, an official conclusion that tapping available alternatives (inland lakes, additional shallow aquifers) could carry worse environmental impacts.

Why the basin matters

As every Minnesota schoolchild learns, the Great Lakes are the world’s largest body of interconnected lakes and hold one-fifth of the world’s surface freshwater, by volume. Far fewer folks understand that the lakes occupy a basin that, relative to their surface area, is quite small.

For instance, in the Milwaukee/Waukesha region the “subcontinental divide” that forms the basin boundary, sending this raindrop to Lake Michigan and that one toward the Mississippi River, is within a dozen miles of the lake’s shoreline in places; Waukesha is about a mile and a half to the west of the boundary. 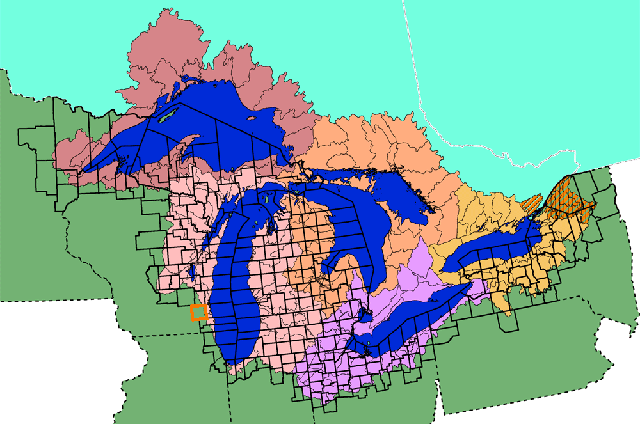 U.S. EPA
In this map showing counties in and bordering the Great Lakes’ basins, Waukesha County is highlighted in orange.

Imagine putting both “basins” on the deck in a gentle rain and you can see the problem: The shot glass captures far less precipitation relative to surface area (or volume),  which means that whatever water is removed takes far longer to replace.

That limiting reality hasn’t stopped decades of talk – mostly fanciful, given the huge construction and/or transport costs – of sending Great Lakes water to parched California, or to profligate Kuwait.

But it has moved policymakers and governments to draw a line against diversions across the basin boundary – the line that Waukesha now proposes to test with its claim of exceptionality.

Interestingly, the line’s particulars may have been drawn with just this battle in mind. Five years ago, in an interview with the Great Lakes Echo, Noah Hall of the Wayne State University Law school and the Great Lakes Law blog said:

What people wanted was exactly what I think we got: a very, very little open window to give Waukesha some possibility of getting a Great Lakes diversion, but it won’t be easy and it shouldn’t be easy. 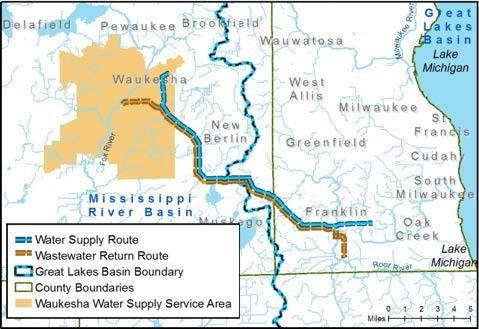 Wisconsin DNR
Waukesha proposes to receive Lake Michigan water through a new pipeline from the city of Oak Creek, which already gets its water from the lake, and return treated wastewater via the Root River.

As Peter Annin notes in his fine book, “The Great Lakes Water Wars,” Waukesha has been displaying a “pugnacious, irascible and unreasonable” stance on its water needs, and a covetous eye for Lake Michigan, for decades — starting with a bid to share in Chicago’s withdrawals.

When Congress voted in 1986 to require that out-of-basin transfers be returned volume for volume, Waukesha sought to be exempted for withdrawals of 20 million gallons daily, about twice what it now seeks. When the U.S. Environmental Protection Agency ordered it to meet radium standards, it sued first, then settled.

No wonder there’s a certain level of suspicion about the current proposal, the supposed lack of alternatives and the DNR’s supportive findings.

A coalition of regional environmental groups told the Milwaukee Journal Sentinel that they will commission a new engineering analysis to challenge Waukesha’s bid in a public-comment period that runs through Aug. 28.

The arguments are likely to parallel those raised in a 2013 analysis funded by the National Wildlife Federation and prepared by Jim Nichols, a hydrogeologist and former director of the U.S. Geological Survey’s Michigan Water Science Center. Among its points:

The Wisconsin DNR expects to reach its final decisions in September. I asked the Minnesota DNR how it would handle the referral under the Compact and Julie Ekman, manager of the conservation assistance and regulation section, replied:

We have not yet established how we will handle this. Although, I can envision that we will connect with our sister agencies to assess their interest in reviewing the project.

We are upstream from this project, so there won’t be physical impacts to the Great Lakes basin that lies within Minnesota. This fact might have implications for the extent of review conducted. But I can’t say that for sure yet.