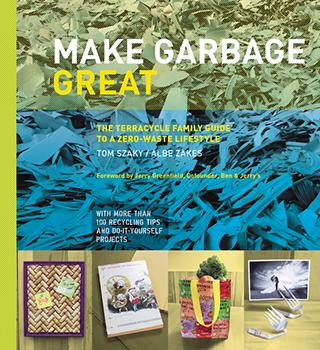 Garbage is an unlikely topic for a terrific coffee-table book, but the authors and publisher have come close with “Make Garbage Great: The TerraCycle Family Guide to a Zero-Waste Lifestyle.”

TerraCycle is a young company devoted to innovative recycling services as well as “upcycling,” an optimistic notion which holds that there’s a value-added world beyond the pyramid of reduce-reuse-recycle – that our everyday discards can be transformed into something better than the original item grown obsolete.

One provocative example: TerraCycle turns cigarette filters into plastic pellets that can be used in the manufacture of durable plastic goods, like park benches and shipping pallets (with the paper and tobacco scraps being composted, of course).

Another: making Target’s plastic shopping bags into those reTotes you may remember but which TerraCycle might just as soon forget, as the project lost a lot of money for a company that was coming to be known as “the Google of garbage.”

So I was eager to peruse the book’s selection of “more than 100 recycling tips and do-it-yourself projects.”

My emphasis added there and, as it turns out, in the wrong part of the subtitle, because the tips outweigh the projects by four to one.

But if you’re the sort of DIY-er drawn to fashioning a wallet out of a bicycle inner tube, or a garden planter out of eggshells, these 20-odd projects – some of them very odd indeed – may be enough. They might even stir you to better ideas of your own.

More durability than we need

Needless durability is of course is the biggest problem with modern garbage, as author and TerraCycle execs Tom Szaky and Albe Zakes explain in fascinating depth. So much of it lasts so long, and keeps piling up, and until we change our way of thinking about this problem it isn’t going to get any smaller.

But most of us don’t think about it at all, or not very often, even if we’re among those who contribute to the problem on an industrial scale.

Jerry Greenfield, a co-founder of the Ben & Jerry’s ice cream outfit, provided a foreword to “Make Garbage Great.” Though his company stressed environmental values and social responsibility in making its products, he writes, there were some blind spots about waste:

I knew that in the production of ice cream, in the manufacture of its packaging, and in the countless plastic and wooden spoons we distributed, a lot of additional waste was generated …. I thought of all of these impacts as necessary, even when operating in the most thoughtful way possible.

My perspective changed once I read an advance copy of Make Garbage Great. … What is wonderful is that the format allows the content to be savored in small doses; it allows us to not only learn about waste but also how to purchase, reuse, and discard differently, all the while entertaining.

The story of plastics

The book defines garbage as “anything you’re willing to pay to get rid of,” which is a provocative construct on its own, when you think about it, because why acquire it in the first place?

And that brings me to one of three serious shortcomings in “Make Garbage Great”: no footnotes, no references, no bibliography and, nearly as vexing, no index. You’re on your own to find out more about Ágilyx, or to return to this brief reference if you move on without marking your place.

A second weakness is a selection of upcycling examples that are occasionally inspiring – like the technique developed by Carnegie Mellon students, organized as Engineers Without Borders, to flatten plastic beverage bottles and turn them into cheap, durable, oddly beautiful roofing for poor countries – but more often kind of dopey.

Jerry Greenfield says he loves the bird feeder made by cutting holes in a large beverage bottle and sticking plastic spoons through the sides to make perches. But I bet he hasn’t made one for his own place. (Me, if it was hanging from one of my trees, I’d hope for a windstorm.)

A matter of taste, perhaps, but I think better examples of here-and-now possibility on a large scale will be needed to inspire new attitudes toward the flood of unrecycled plastics exhausting our landfills, killing our wildlife and forming massive trash gyres in our oceans.

Which leads me to the book’s third shortcoming.

Szaky and Zakes note that some localities are banning styrofoam and microbeads, two of the five plastic products they say a thoughtful consumer ought never buy; the others are bottled water, disposable dishware and products containing PVC.

But you can look in vain for discussion of how these political successes were won and how they might be replicated, especially with products less trivial in daily life than a styrofoam cup. Getting PVC out of stuff like shower curtains, pencil cases and other trinkets is a no-brainer; plumbing pipe and fittings would seem a different kind of challenge.

If you come to this book out of an interest in knowing more about garbage, you’ll be amply rewarded. If you’re seeking a zero-waste lifestyle plan, which the cover seems to offer, you’ll have to assemble it yourself from ideas gathered here and there, and it will take some patience.

I’m guessing you already take your own bags to the grocery and pack your picnic basket with real plates, glasses and silverware. You’re already avoiding disposable products where possible and recycling everything you can think of among the remains.

But that’s not enough, and we all know it’s not enough, and though it’s certainly true that every little bit helps at least a little, making serious progress is going to require more than getting people to sew eyeglass cases out of old blue-jeans pockets, fold foil chip bags into origami napkin rings (how many of those do you need?), or build their own room dividers out of 185 CDs, 500 plastic washers, 450 pop rivets and 70 feet of molding, plus assorted hinges, screws and other hardware.

(Somehow I feel the people who have pop-rivet guns and the people who would assemble this, um, interesting decor item are generally not the same people.)

“Make Garbage Great” is an informative and entertaining book, and it will stay on my coffee table for a while. But securing a lower-waste future is going to take more than the solutions it offers.

It’s going to take serious, deep changes not only in our personal lives and the post-consumer recycling sector – in which TerraCycle, I grant, has an interesting and potentially important niche – but also in our laws and therefore in our legislatures.

We can’t just build it out of discarded drink pouches.