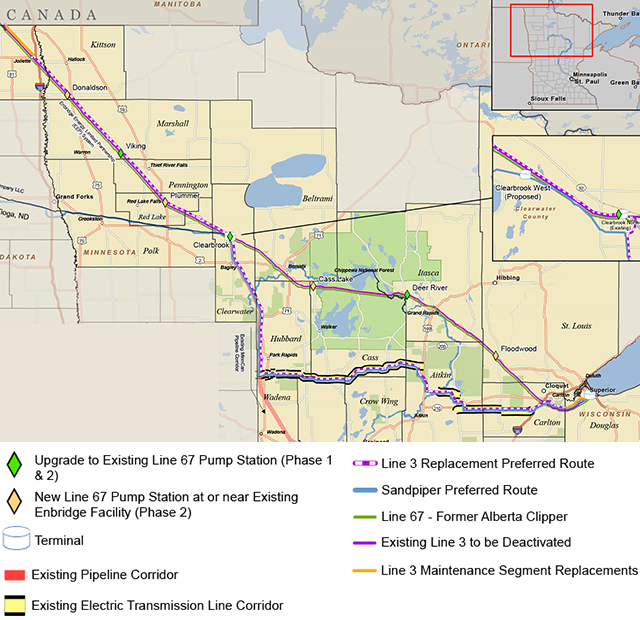 For those who believe the U.S. government strangles commerce with excessive regulation —and to entertain those of us who know better — I wish there could have been a TV broadcast of Thursday’s hearing on Enbridge Energy’s cleverness with a pair of trans-Minnesota oil pipelines.

You’ve probably heard of the Alberta Clipper, although the company’s lawyers prefer a more prosaic label for the project: Line 67. It begins near Hardisty, Alberta, and carries tar-sands oil to the port at Superior, Wisconsin, crossing the international border near Neche, North Dakota, and entering Minnesota shortly afterward.

This is not Enbridge’s Sandpiper line, which hasn’t been built yet and would run to Superior from the North Dakota oil fields. Nor is it the Keystone XL project, which wouldn’t pass through Minnesota even if approved by the Obama administration, a situation that is looking less likely all the time.

In addition to safety and construction permits from various agencies, pipelines that cross a U.S. border also require for national security reasons a so-called Presidential Permit, a name that has stuck even though they’ve been issued, since Lyndon Johnson’s presidency, by the State Department. (This is the permit that Keystone XL probably won’t get because of various environmental concerns, not least that tar-sands oil can fairly be called the dirtiest oil on earth, with especially troubling contributions to the globe-warming greenhouse effect.)

Line 67 got its Presidential Permit in 2009, based on a State Department review of environmental impacts associated with an initial transport volume of just 450,000 barrels per day.

Environmental groups challenged the approval process in federal court, saying the State Department’s review should assume that Enbridge would eventually use the Clipper’s full capacity of 880,000 bpd of crude oil, and even higher volumes of refined products (by comparison, Keystone XL’s design capacity has been reported as 830,000 bpd).

But Enbridge disputed the assertion, the environmentalists lost, and oil started moving through the Clipper line in October 2010.

About two years later, Enbridge announced it would seek permits to increase oil transport to 570,000 bpd by mid-2014 and to 800,000 by right about now; the State Department is reviewing the environmental consequences of this volume.

Switching lines at the border

But in the meantime, as MinnPost reported last November, Enbridge has decided to ramp up its capacity anyway with a pipeline switcheroo that I’m tempted to call a shell game, except that sounds kind of unfair to a major oil company that isn’t part of the ploy.

As it happens, Enbridge has slightly smaller diameter pipeline dating from the 1960s that runs from Alberta to Superior, crosses Minnesota along about the same route as the Clipper, and shares a right-of-way with the Clipper in its border segment.

It’s called Line 3 and its permits (including a Presidential Permit) do not specify an upper limit on the volumes it can carry.

Enbridge says it plans to rebuild much of the line on a route that has yet to be officially determined; some aspects of the project are being reviewed by the Minnesota Public Utilities Commission.

But in the meantime, it has replaced one short but critical section astride the international border, and is using it to increase shipments on the Clipper while it waits for the State Department to finish its review.

Through a pair of interconnections – which it describes as features common to any pipeline system – Enbridge takes oil off the Clipper in Canada, moves it onto Line 3 for a border crossing, then returns it to the Clipper at a point beyond where the U.S. State Department considers its jurisdiction to end.

Enbridge isn’t a defendant in the case discussed Thursday, a lawsuit against the State Department filed on behalf of the White Earth Nation, the Sierra Club, the National Wildlife Federation and other groups who are seeking to compel the government to do its job, at least as the plaintiffs see it.

The department’s responses as articulated by Luther L. Hajek, of the Justice Department, were plain, terse and focused on procedural issues:

The plaintiff’s case, as put by Ken Rumelt of the Vermont Law School’s environmental program, is that the bypass has put into operation a project that is still awaiting an approval everyone agrees is required by law.

The same oil is entering and leaving the pipeline at the same origin and destination, he said, and crossing the international border in the same location, “with the exact same environmental impacts as the expansion that triggered environmental review in the first place.”

But by “shifting the labels from one pipeline to another,” he said, Enbridge has achieved a baseline capacity of at least 800,000 bpd without a new permit, and “environmental review has been eviscerated in the process.”

Enbridge’s side of the story

Because of its status as an intervenor in the case, Enbridge had its own lawyers at the table with State. Its views were laid out by David Coburn, an attorney from Washington, D.C., who also wrote the June 2014 letter informing the State Department of Enbridge’s plans to reroute Line 67 oil onto Line 3 at the border.

Beyond defending the pipeline switch as perfectly legal and appropriate, Coburn objected to Rumelt’s suggestion that Enbridge might build a new Line 3 and continue to operate the old one as well, which he called “frankly a bogus claim.”

Canada requires pipelines to be dug up after abandonment, he said, but U.S. law permits the mothballed sections to remain in the ground – and Enbridge plans to do so because it prefers to avoid the costs and potential environmental disturbance of removing it.

As for objections to how Enbridge is using Line 3 in the short term, he said, “What they’re really challenging is permits granted in 1991, and I’m sorry, but it’s too late for that.”

All parties in the case are asking for summary judgment on their terms, and because the issues are more about law and procedure than the facts of the matter, further proceedings are considered unlikely.

U.S. District Judge Michael Davis asked only a few clarifying questions during Thursday’s two-hour session, and gave no indication how soon a decision might be expected.

Among the questions he didn’t ask is one that seems to be at the center of the situation:

If Enbridge fails to win the new State Department approval it’s seeking, for the increased volumes it long said it wouldn’t be pumping, what would keep it from using its current workaround forever?

Is Alberta Clipper pipeline switcheroo beyond the power of U.S. courts?