Not far from my house, and almost certainly not far from yours, is an immense swath of staghorn sumac.

A tree known to every Midwestern child who knows any trees at all, the sumac may be tied for first place in exotic peculiarity with the urban ginkgo. And it is everywhere.

Sumac looks as if transplanted from some tropical jungle, especially in the fading days of summer, when the upright cones of berries deepen in color to match a glass of cabernet and the palm-like fronds of foliage start flashing crimson, ahead even of the early maples.

It typically grows in thick groves, spreading by underground runners and popping up anyplace it can until has filled every open square foot. Then it begins to annex the territory of other low shrubs by surrounding, shading and otherwise outcompeting them.

A favorite landowner response in my part of western Wisconsin is to mow it down year after year, which only makes matters worse with hydra-like invaders such as sumac and buckthorn (buckthorn being of the few species I see regularly holding their own in a sumac sea).

Road crews do this, too, until the sumac grows too tall for their equipment. Along Wisconsin Hwy. 35, for example, on the east side of Lake Pepin, there are stands that have grown to 50 feet or so, their thick canopies creating a dense maze of dark tunnels below.

These groves are majestic and beautiful, but their fruit is out of reach to the forager bent on gathering berry clusters for the venerable late-summer beverage known variously as sumac tea, sumac ade, Indian lemonade or rhus juice. 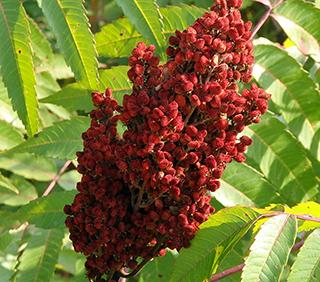 In the sea of Rhus typhina nearest my place the trees are about my own height or can be bent down to my level, and for several years I have been meaning to try out the treat I first read about in either the texts of the late Euell Gibbons or of his contemporary literary descendant Sam Thayer, who writes with a special focus on Wisconsin.

I know it wasn’t in Ava Chin’s “Urban Forager” blog, which used to appear in The New York Times, but last week I ran into an old post of hers entitled “Shrubbery You Can Drink,” about gathering sumac berries on Staten Island, and it came at just the right time.

I had spent the better part of a day on documents I thought would lead me to a good story but hadn’t, and to relieve the cranky mood that ensued I grabbed a bag and pruning shears late in the afternoon and let the spirit of Euell, Sam and Ava lead me to the sumac grove at last.

Gathering sumac berries for tea is about the easiest foraging enterprise there is. You can’t possibly mistake staghorn sumac for anything toxic or unhealthy in this region; you’ve no doubt heard of so-called poison sumac, which the forager Green “Eat the Weeds” Deane rates “the most toxic contact plant in North America,” but it has big white berries in hanging clusters rather than tiny red ones in upright cones. Also, it lives in swamps and resembles ordinary alder more than something tropical.

You could easily mistake smooth sumac for staghorn – its new branches lack the velvety, hairy coating that gives staghorn its name – but it wouldn’t make much difference, from what I’ve read, to your sumac tea because the berries are about the same.

However, be aware of Thayer’s counsel in The Forager’s Harvest that “since sumac is related to cashews and mangoes, anyone allergic to those foods should avoid it or proceed with caution.”

Into the sumac sea

I cut about 15 clusters for this first experiment, preferring those with the deepest color and least insect damage (birds apparently do not feed on these berries much). It was a hot and dry afternoon so I didn’t have to worry about recent rain having washed the flavor away.

You will read advice about field-tasting as a guide to choosing the choicest clusters, and that might work in late spring or early summer, but these berries are mostly seed with a thin fruit coating and by August the coating is thin, waxy and dry.

(To a botanist, these clusters are known as panicles or drupes, and therefore are anatomical cousins of raspberries and blackberries, which is unimportant but kind of interesting.)

You will also read a variety of suggestions about how to get the fine flavor out of the berries and into a glass.

Some suggest rubbing the clusters between your hands to break the berries loose; this will coat your hands with the waxy red materials that carry the flavor, wasting it.

Some suggest putting the clusters into a pitcher and muddling them with a potato masher or something like it; alas, this makes it easy to mash any bugs you might wish to exclude.

I think Ava Chin has the best approach, quoted here with light compression:

Lay out a clean cloth or butcher paper on a flat surface outside where you can spread out the panicles and examine them for hitchhikers. Gently tap them and check them out for stink bugs, spiders, etc., which might be hiding. Don’t wash them, because doing so will wash off all the flavor; discard any that seem dirty for some reason.

In the kitchen, fill your largest bowl about halfway with cool water [everyone agrees that hot water wrecks the flavor]. Submerge one or two of the sumac panicles in the water at a time and rub the berries between your hands and fingers under the water. You are trying to rub off the red, velvety powder into the water. Once you have done this, the white surface of the berries will be revealed and the water will become more and more pink.

I used about three quarts of water for my 15 clusters and the water went from clear to pink to a pale reddish gold. Rather than discard the clusters right after rubbing, I left them in the bowl to soak for a few hours, which deepened both the flavor and the color.

I scooped out clumps of spent material with a slotted spoon, then poured the liquid through a fine mesh sieve to remove seeds that had broken loose. Then I strained it two more times through cheesecloth to catch fine hairs released in the rubbing process.

After a few hours of chilling in the refrigerator, I sampled a glass of sumac tea that had a color somewhere between apple cider and red ale, and a mildly tart, highly botanical flavor with elements of citrus, rose hips and a deep, bright, earthy foundation that lies beyond my culinary vocabulary but impressed me as the flavor of summer turning to fall.

Sallie, who was politely skeptical of the whole project, pronounced it a tasty success.

As for me, I’d pay for this stuff at the grocery if I could.

Summertime in a jar 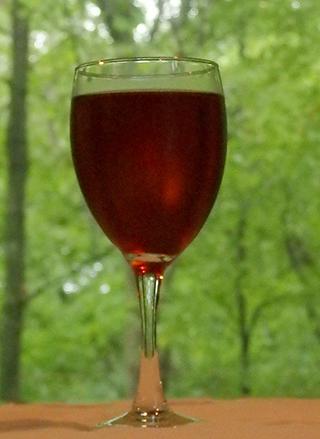 MinnPost photo by Ron Meador
Summertime in a jar

I’m sipping another glass as I write this on Wednesday afternoon, remarking that its freshness is unchanged by a week in the refrigerator. Noting, too, through my window the on-and-off rainfall that mean my next trip to the sumac grove will have to wait a few days.

But I’ll be going back for sure, and this time with a bigger bag.

Thayer writes of processing batch after batch of berry clusters into the same liquid, making a concentrate that can be frozen for later dilution.

It seems only a little more challenging to collect the seeds left over from a session of beverage-making, then dry them and grind them into a tart, astringent spice that provides a trademark dimension to Lebanese, Persian and other Middle Eastern cuisines.

Both techniques, it seems to me, are ways of capturing summertime in a jar.

Views differ among the foraging experts about when the sumac-gathering season ends, but I’m confident I’ve got a couple of weeks left for sure. And so, if you’re interested, do you.