“This is not for print,” Deb Ryun said with a sweep of her hand, “but I think it’s absolutely brilliant.”

We were in a gaggle of about 100 folks gathered on Monday and wilting slightly in the midday heat of an Andersen Corp. parking lot in Bayport. The occasion was the kickoff celebration for a five-year effort to restore butterfly and bee habitat across the St. Croix River watershed.

More than 70 government agencies, private companies and nonprofits – including Andersen and Ryun’s St. Croix River Association – have already committed their time, money and expertise to a collaboration whose strategy and  organizational structure are still coalescing around the St. Croix Valley Pollinator Partnership Pledge.

But the pledge’s bold objective is plain: To create a continuous corridor of healthy pollinator habitat winding across public and private lands throughout the watershed, which rises like a great funnel from Prescott, Wisconsin, and spreads across nearly 8,000 square miles, almost to Lake Superior.

This will require more than planting milkweed in boulevards and backyards.

Ryun’s point (which she agreed, after further discussion, to let me share) is that the fresh focus on the plight of monarch butterfly and other pollinators has stimulated a deep, intense public engagement with ecosystem stewardship that proved much harder to achieve, for example, on restoration of native prairies.

I completely agree, and I suppose that may be what interests me the most about the new collaborative – that it just possibly could point toward a new model for taking up intractable environmental problems with very broad potential payoffs.

Moreover, in pollinator protection it is focused on a wicked complex of forces whose urgency could scarcely be greater but whose solutions are comparatively simple, if not exactly easy. Yet a concerted drive toward achieving them has thus far seemed to lie beyond the normal capabilities of government policy and regulation.

So this is an inspiring endeavor right from the start, one that will be well worth watching as it goes forth to, for example, identify existing islands of good pollinator habitat and  then link them with newly improved habitat on public and private lands, creating a “nectar corridor” for both migrating pollinators (like monarchs) and nonmigrators (like bees).

Three large federal agencies are engaged in the pollinator effort, in part because of President Barack Obama’s directive of May 2015 that they find ways to promote the health and habitat of bees, butterflies, bats and birds that carry pollen from flower to flower.

The U.S. Fish and Wildlife Service, which has committed $4 million a year for the next five years to support the collaborative, was represented at Monday’s event, and so were the U.S. Forest Service and the National Park Service.

Chris Stein, superintendent for the St. Croix National Scenic Riverway, emphasized the involvement of organizations large and small, most specifically focused on pollinator issues but some not so much – “I saw someone here from Yoga By Julie a moment ago,” he said, scanning the crowd.

So far this year, he said, groups have pledged a total of 13,000 volunteer hours in a fundraising effort whose donors pledged to match time with money.

Speaking for Xcel Energy, Laura McCarten said the utility considers its involvement with the collaborative an extension of the parkland gifts made in decades past by Northern States Power, and also a possible demonstration for other utilities to study as the nation looks to powerline rights-of-way as ripe locations for new pollinator habitat. (Xcel’s, she noted, stretch from Wisconsin to Texas, on an alignment used by monarchs migrating to Mexico and back.)

I didn’t see Julie, or any other yoga-oriented pollinator pledgers, but I talked with people from such outfits as the Pollinator-Friendly Alliance, the University of Minnesota Bee Lab, Friends of Scandia Parks and Trails and the Save Our Monarchs Foundation, all of whom seemed happy to be taking up their part of a huge task. 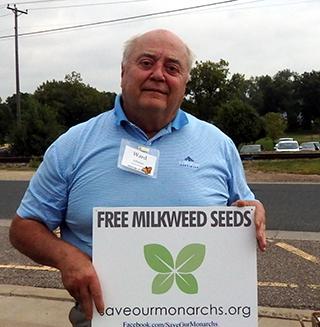 MinnPost photo by Ron Meador
Ward Johnson of Save Our Monarchs has been captivated by the butterfly since childhood and now hands out 3,000 packets of milkweed seed a day to help save them.

Ward Johnson, the founder of Save Our Monarchs, was handing out packets of seed for swamp milkweed, as he has been doing for the past 18 months at a rate, he said, averaging 3,000 packets per day.

He gave me a few packets, instructed me on promoting a higher germination rate by refrigerating them in damp paper toweling for several weeks before planting, then gave me a few more.

This emboldened me to ask his thoughts on a little landscaping project I’ve had in mind, to plant a perennial buffer where our lawn ends and the woods begin – using species that are beneficial, not merely ornamental, to outcompete white snakeroot, Virginia creeper and other assorted weeds. Would swamp milkweed work there?

Johnson thought it would, and though he hadn’t brought them to Bayport, he has seeds for other pollinator-friendly perennials; he invited me to check back with him as the plan evolves for some specific suggestions.

By the end of this year, he said, he expects to have distributed 600,000 packets of milkweed seed alone, and that sounded like a lot of work to me, so I asked about his group’s size.

Where does the funding come from?

“I put $25,000 of my own money into it, and of course we accept donations,” he said, trailing off for a moment. “The thing is, we just can’t lose the monarchs. We’re not going to fail.”

Monarchs at the center

I didn’t see any actual monarch butterflies in attendance on Monday, which, sad to say, has become typical in a region where they once were plentiful; in 2013 and 2014, monarchs reached their lowest recorded levels in Minnesota.

But their images were everywhere in posters, banners, pamphlets and the speakers’ remarks.

And I must say, I was pleased to hear some speakers move beyond the utility that these butterflies and other pollinators have for our food supply, and give nearly equal time to their intrinsic value – as well as our intrinsic responsibility.

Maybe Rep. Betty McCollum said it best, casting the new collaborative in part as an effort to safeguard a living object of wonder well-known to every schoolchild:

“You will see in these first plantings that take place what’s needed to save the monarchs, and then you will also see the results…. We are going to make sure that seven generations from now, people are still in awe of this wonderful planet we share with the pollinators.”

The full text of the partnership’s Pollinator Pledge is here [PDF]. The U.S. Fish and Wildlife Service’s Save the Monarch page is here, and its materials on Monday’s event are here.