The Sandpiper oil pipeline’s relatively smooth sail through regulatory waters came to a shuddering halt on Monday, with the Minnesota Court of Appeals taking back the certificate of need the project won from the Public Utilities Commission in June.

The PUC ignored both the plain language and central requirements of the state’s cornerstone statute on environmental review, a three-judge panel found, sending the certificate approval back to the commission for a do-over.

The problem was not the PUC’s unusual and apparently unprecedented decision to divide its normal review procedure into two distinct phases:

Rather, the court said, the PUC must prepare a full environmental impact statement, with ample opportunity for public involvement, before taking any major action on the pipeline.

And by kicking the EIS down the road to phase 2, while relying on an abbreviated analysis by the state Commerce Department in phase 1, the PUC violated not only the letter but the fundamental spirit of the Minnesota Environmental Protection Act (MEPA).

To my eyes the opinion written by Judge Roger Klaphake accepts essentially all of the reasoning laid out in the brief that Kathryn Hoffman and Leigh Currie of the Minnesota Center for Environmental Advocacy prepared for the Friends of the Headwaters, a small group formed to force a rerouting of the pipeline to less sensitive areas.

Not just where, but whether

The PUC is entitled to “bifurcate” its decision-making — a move the Friends did not oppose – but not the environmental analysis that informs those decisions, Klaphake wrote. And he added this pungent, to-the-point observation (my emphasis added):

Moreover, completion of an EIS at the initial certificate of need stage seems particularly critical here because once a need is determined, the focus will inevitably turn to where the pipeline should go, as opposed to whether it should be built at all.

Reaction from Canada’s Enbridge Energy, which is partnering with Ohio’s Marathon Petroleum Corp. to build the Sandpiper, was unenlightening as to what the ruling might mean to the project’s future. I quote it here in full:

Our position has always been the Sandpiper Pipeline Project is the safest and most environmentally sound transportation option for the movement of North Dakota crude petroleum while carefully balancing the needs and providing clear and direct benefits to the State of Minnesota.

The prior direction from the State was that there is sufficient environmental review within each phase of the regulatory process.

We stand behind the work of the Department of Commerce in its environmental review of the Sandpiper Pipeline Project. We support the Public Utilities Commission’s decision to unanimously issue a Certificate of Need. We stand with our project supporters – the workers, counties, laborers, and landowners and their surrounding communities that have steadfastly supported this project.

We will evaluate our options for next steps with this important project.

It is important to understand that the PUC’s evaluation of various utility and energy projects differs significantly from the more familiar certificate-of-need review when, say, a health-planning agency considers whether a hospital has made its case for adding a new MRI scanner to those already in a service area.

The hospital’s project is highly local in every respect, and much of the reviewers’ decision turns on the business activity of the petitioning health-care company and its competitors: Is there unmet demand for scans in the area? Will the new MRI create undesirable competitive pressures? Will it drive up costs?

It’s different when PUC considers a certificate of need for a new generating plant sought by an electric utility or a new natural-gas pipeline for the gas company.

Or, in this case, a new crude-oil pipeline for the North Dakota Pipeline Company, the Enbridge-Marathon entity formed to build the Sandpiper as a conduit carrying oil from the Bakken fields in western North Dakota to the port at Superior, Wisconsin.

Business needs are still a factor, of course, but the PUC’s consideration of public benefits — and costs — is a much larger and more complex question, with the environmental impacts inherent in energy projects taking center stage.

After all, nobody is arguing seriously that people living along the pipeline’s 610-mile route (300 of that in Minnesota) will get more gasoline, better gasoline or cheaper gasoline because of their proximity to the Sandpiper. 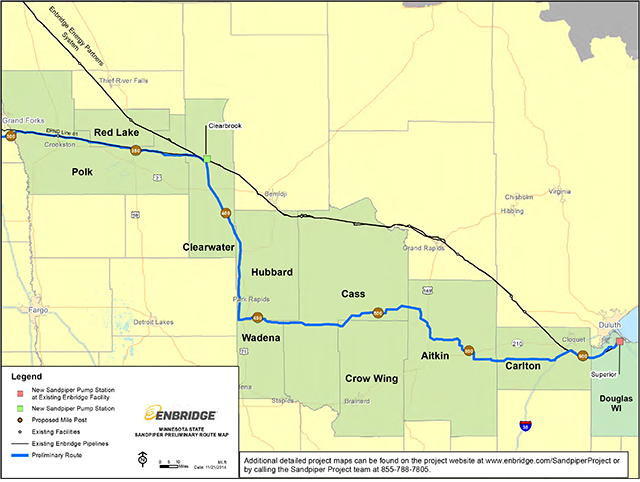 The PUC is required to assess not only such localized factors as construction impacts and the risk of pipeline leaks, but pollution and global-warming impacts far beyond the project corridor and, for that matter, state borders.

And under MEPA, the appeals court has affirmed, it’s required to do so before taking any major, final action on the project.

The PUC obviously felt its “final action” would come during the second, route-permit phase. But the Friends petition argued successfully that the standard is not about which action is “final” in time, in the sense of coming last in a series, but about any action that effectively brings a substantive regulatory process to closure – such as a certificate-of-need approval.

That said, there are plenty of routing issues as well, given that the pipeline would, in the words of the Friends challenge, “cross Minnesota at what is possibly the worst location from an environmental perspective in the entire state.”

This proposed pipeline would, if approved, carry 375,000 barrels per day of crude oil on a route that cuts across the highest quality and most pristine lakes in the state, the most concentrated area of wild rice lakes, rivers of cultural and ecological significance including the Mississippi, vulnerable aquifers, and the most remote areas, making access to respond to an incident difficult.

Moreover, NDPC has designed the proposed pipeline to expand to 711,000 barrels of crude oil per day and has already begun the approval process to put a second pipeline in this same corridor; this will bring the total volume of oil moving through this ecologically sensitive corridor to well over 1,000,000 barrels per day.

(The second pipeline is Enbridge’s Line 3, discussed here the other day.)

Friends of the Headwaters are not alone in raising concerns about impacts along the pipeline route. The White Earth Band of Ojibwe, Winona LaDuke’s Honor the Earth organization and the Carlton County Land Stewards are also fighting the pipeline.

All of the suggested alternatives would shift the Sandpiper southward to move it away lakes that are considered especially vulnerable.

But so far Enbridge, which tends to do all of the speaking for the pipeline partnership, has said it isn’t interested in deviating from its preferred route. And it has already won necessary approvals for a slightly longer section of the pipeline in North Dakota.

The appeals court ruling can be read here.

Why the Sandpiper pipeline went aground in appeals court