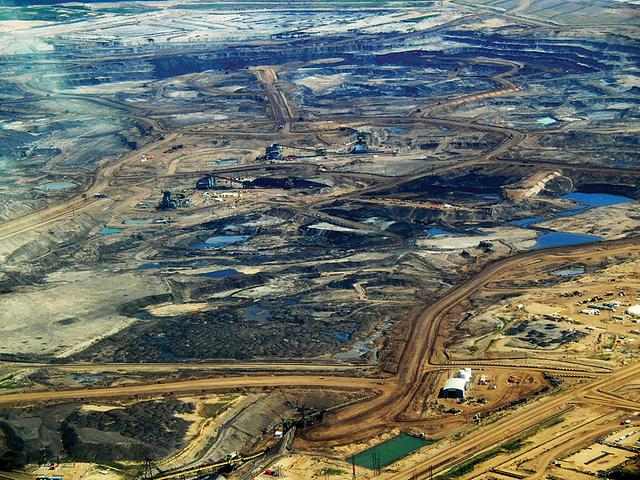 CC/Flickr/Dru Oja Jay, Dominion
The economic struggles of Canadian tar-sands operations have been in the news for more than a year now.

The economic struggles of Canadian tar-sands operations have been in the news for more than a year now, with falling prices and rising supplies making it increasingly difficult to turn a profit on the world’s dirtiest and most difficult source of petroleum.

But the last few days have brought a spate of reports that struck me as unusually dire in their outlook for a business that had seemed invulnerable for so long.

Perhaps you saw the headline in Tuesday’s New York Times: “Oil Sands Boom Dries Up in Alberta, Taking Thousands of Jobs With It,” on a report from Fort McMurray by Ian Austen:

At a camp for oil workers here, a collection of 16 three-story buildings that once housed 2,000 workers sits empty. A parking lot at a neighboring camp is now dotted with abandoned cars. With oil prices falling precipitously, capital-intensive projects rooted in the heavy crude mined from Alberta’s oil sands are losing money, contributing to the loss of about 35,000 energy industry jobs across the province.

Yet Alberta Highway 63, the major artery connecting Northern Alberta’s oil sands with the rest of the country, still buzzes with traffic. Tractor-trailers hauling loads that resemble rolling petrochemical plants parade past fleets of buses used to shuttle workers. Most vehicles carry “buggy whips” — bright orange pennants attached to tall spring-loaded wands — to help prevent them from being run over by the 1.6-million-pound dump trucks used in the oil sands mines …

After an extraordinary boom that attracted many of the world’s largest energy companies and about $200 billion worth of investments to oil sands development over the last 15 years, the industry is in a state of financial stasis, and navigating the decline has proved challenging. Pipeline plans that would create new export markets, including Keystone XL, have been hampered by environmental concerns and political opposition. The hazy outlook is creating turmoil in a province and a country that has become dependent on the energy business.

Austen’s piece was comparatively optimistic, noting as it did that construction continues in the oil patch because investors have sunk so many billions that abandonment isn’t an option.

But every other cost-cutting measure apparently is on the table, according to a Bloomberg article in Toronto’s Globe and Mail on Wednesday. Excerpts:

Holiday parties, child-care benefits and Fridays off are being targeted as the rout in crude prices grinds into its 16th month, workers and company representatives say …

ConocoPhillips, which is cutting 500 workers in Canada this year, removed complimentary juice and soda from fridges in Calgary and cancelled personal development benefits of as much as $1,500 a year that some workers used for sports training.

Cenovus Energy Inc. is weighing whether to end the practice of employees getting two Fridays off a month. The company already reduced its travel and training budgets and has eliminated 1,340 jobs.

Cutting to the credits, the Financial Post’s Claudia Cattaneo opined on Wednesday that “Canada’s days as a would-be energy super-power are over” and falling world prices provided “just the final straw, albeit a painful one.”

Like many observers of Canadian politics, she expects Stephen Harper’s Conservative Party to be punished at the polls next Monday for its steadfast backing of “oil and gas at the expense of other industries and causing a recession in the process.”

Even if the party manages to hold on to power in Monday’s national elections, she says, the political will to defend the tar sands will have been weakened considerably (the Tories have already been tossed out in Alberta).

The national will isn’t there, either. Parochial, environmental and Aboriginal groups opposed to building the infrastructure essential for oil and gas exports have drowned reasonable voices and are getting their way. The Canadian energy strategy produced by provincial premiers this summer is a measure of what politicians are willing to support: a mishmash of ideas to appease all interests, and not a single mention of the oil sands.

Frustrated investors have moved on. New technology has unlocked massive deposits of shale gas and tight oil (particularly in the United States) that are better suited to respond to increased pricing volatility than Canada’s expensive oil sands or liquefied-natural-gas projects that need everyone’s permission to get done.

“The Canadian energy business has nowhere to go,” says Terry Shaunessy, president of Shaunessy Investment Counsel, a money management firm in Calgary that has moved all its investments outside the country. “What did we learn? That energy is not a particularly scarce resource; it’s actually everywhere.”

The best outlook for Canada’s oil and gas sector, Cattaneo feels, is to survive the current contraction as “a mid-sized regional supplier dependent on the U.S.,” where “new technology has unlocked massive deposits of shale gas and tight oil that are better suited to respond to increased pricing volatility.”

Indeed, Canada’s exploitation of oil reserves previously considered uneconomic may have converted its southerly neighbor from a prime customer to a rival supplier, according to Gordon Jaremko of Natural Gas Intelligence/Shale Daily. In a piece published last Friday, he laid out the resulting impact for Canada:

For the current 2015-2016 fiscal term the treasury take is forecast to be down from the 2005-2006 peak by 75% to C$3.6 billion (US$2.8 billion). Gas royalties have all but vanished by shrinking to C$392 million (US$302 million). Lease auctions, a barometer of industry intentions, have also shriveled to C$157 million (US$121 million). Growing oilsands plants, recognized as high-cost producers by royalties that apply only to after-expenses profits, will not offset the losses.

An unnamed Canadian oil executive/investor quoted in The Times piece predicted that higher prices won’t be enough to shore up the Alberta operations for a future that’s likely to feature stricter environmental controls and demands for larger royalty payments on production.

“There’s never been a time when I’ve been less optimistic,” he said. “The general public doesn’t know how bad it is. It just hasn’t hit yet.”

He did, however, acknowledge that environmentalists had won the debate on Keystone XL as well as various other pipeline plans. “I don’t know how the issue got away, but it’s obvious now that it did,” he said.

A dire outlook for tar-sands oil, and low prices aren’t the only reason