If lately you’ve been noticing odd, fuzzy puffs on the ground beneath an oak tree, you’re probably witnessing a mysterious, fascinating outbreak of leaf galls that seems to be under way in our region, thanks to parasitic wasps.

I first noticed ours about a month ago, on the windshield of the car after returning from Minneapolis. Just three or four on the driver’s side windshield, t above the wipers – pea-sized bits of pinkish fluff I took for chunks of foam from someone’s discarded sofa. A flick of the lever swept them aside.

Later, in the morning after a good rain moved across Skunk Hollow, I found a dozen scattered on the car hood. A sweep of my hand failed to dislodge them – they were stuck fast to a wet surface. Huh.

That evening I collected several from the driveway gravel, added a few from the concrete apron, a couple of dozen from spaces between the deck boards … and now I had a handful of mystery:

Were they some kind of seed, perhaps? Wind-borne portions of an exotic bloom? Something made by spiders?

The puffs seemed to have collected beneath the oaks, so – maybe acorns at an early stage? Well, no, it was already September and fully formed acorns were plentiful on the ground.

I cut one open with a penknife – it took a little pressure – and found a hard, rice-shaped pellet, cream-colored on the inside and darker where the hairs emerged.

As often, a Google image search soon pointed toward a tentative answer – I had a lot of galls. Specifically, the woolly galls that form on oak leaves after certain wasps implant their eggs.

Back outside, I began turning over the season’s first fallen oak leaves until I had not just one confirmation but dozens, and eventually hundreds upon hundreds:

Wasps of the family Cynipidae had colonized our oaks last spring, drilling into new buds and inserting eggs. As leaves sprouted from the buds, they formed woolly scar tissue around these wounds. And now the autumn phase had begun, with the leaves shedding the little puffs at first and then dropping with the galls still attached – usually with the gall-weighted side down, the better to shelter wasp larvae from the ravages of winter until the return of warm weather produced vast swarms of new wasps. 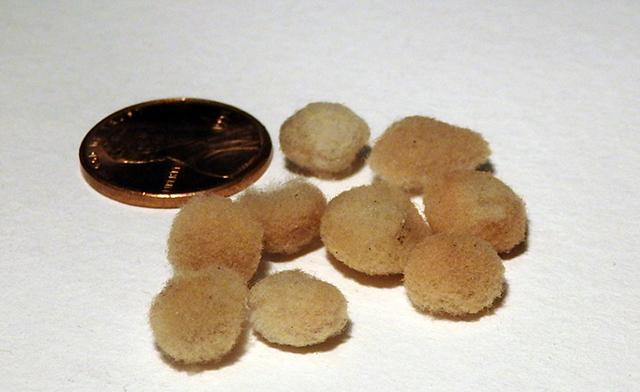 MinnPost photo by Ron Meador
I had a lot of galls.

Sallie and I already wage a running summertime battle with paper wasps that build nests under the eaves, throughout the woodpiles, in the kayak cockpits and sailboat bilge and dark corners of the garage. … Keeping up with them can be an annoyance, not one we’d care to multiply.

Happily, a bit more inquiry established that gall wasps are small and harmless to humans (also, for that matter, to the trees that host them in such large numbers). But that barely scratched the surface of what we wanted to know.

In time I learned that gall wasps, whose species number well over 1,200, were the first research passion of Dr. Alfred Kinsey before he moved on to the sexual habits of humans. (Also, that Sallie once worked at a hospital in Bloomington, Indiana, with a woman who happened to be Dr. Kinsey’s daughter, and preferred to talk about something else.)

And I found that sudden, massive outbreaks of wasp galls have been noted elsewhere in the metro this fall. On the “Ask an Expert” site of the Cooperative Extension system, a Hennepin County resident asked on Oct. 1, “What is this seed?” and included a photo very much like mine, reporting that “there are over 1,000 in my yard, but I cannot find it on any plant or tree.”

Two weeks earlier had come a question from East Bethel in Anoka County: “I have an oak tree that has fuzzy growths on the leaves. They look like cotton. I thought they were galls but I just see a little seed-like thing inside. What could they be?”

So on Tuesday I emailed some of my questions to Val Cervenka, an entomologist who manages the forest health program at the Minnesota Department of Natural Resources. She replied:

Good questions! We’ve been seeing lots of galls as well this year. We saw quite a few woolly oak galls on bur oak. …

We sent these photos to a gall expert in Ohio because we were curious, and he was sure of the genus but could only guess at the species lanata. If you weren’t seeing these on bur oaks, it’s probably another species, since galls can be fairly species-specific. There are many, many kinds of galls on oaks.

To my knowledge these are not cyclic insects. I chalk it up to weather, as we can with so many insect phenomena we see every year. Each year is unique weather-wise, and this must have been the perfect one for these gall insects. You may see the same thing next year, or you may not, depending on winter weather and their survival.

Cervenka kindly shared an email address for her gall expert, professor Joe Boggs at Ohio State’s extension service, and meanwhile, with her tentative ID in hand I looked up the gall wasp Callirhytis lanata.

The lanata images I found online looked exactly like the galls I’d found in Skunk Hollow, but ours were on northern pin oaks, Quercus ellipsoidalis. The single gall I’ve found on a bur oak leaf looked different from the rest but a lot like Cervenka’s specimens – elongated and marked with red bands, caterpillar-like. 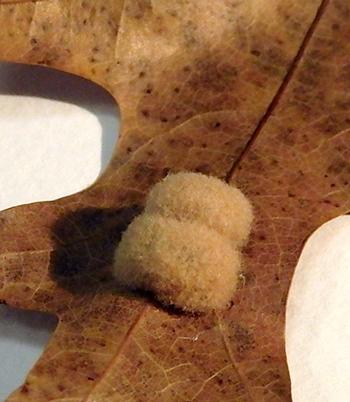 MinnPost photo by Ron Meador
The wasp eggs exude chemicals that turn plant genes on and off to get the tree to produce the structure – the gall – that’s needed to protect the eggs and then later the larvae.

I telephoned Boggs and he explained that it’s difficult to pinpoint a wasp species from a gall photo because the sum of what science knows about gall wasps is greatly exceeded by sum of what it has yet to learn. But what’s known is pretty interesting:

And, generally, the wasp species is identified by looking at the gall rather than examining the actual insect. As far as I know, no scientist has ever observed or grown a wasp through the entire cycle from parent, to egg, to larva, to pupa, to a new adult wasp.

In gall formation, he explained,

What’s happening is the wasp inserts its eggs into the bud of the tree – not the leaf, which emerges later – and only into the bud, because this is meristematic tissue. It’s undifferentiated at this point – the type of tissue it becomes depends on what influences it’s exposed to.

The wasp eggs exude chemicals that turn plant genes on and off to get the tree to produce the structure – the gall – that’s needed to protect the eggs and then later the larvae.

And think about this: These are not [genetically engineered plants] we’re talking about, these oak trees. But we’re talking about a natural process in which one organism controls the genes of another to produce something it needs for survival.

A story of co-evolution, perhaps

I asked Boggs if he felt oaks as a group were distinctive in terms of their insect-driven gall production and he said he thought they were – “you just don’t see this in maples or elms or other tree groups.” And he feels that’s not just coincidence:

I tend to think that oaks and gall wasps have co-evolved, and for wasps the oaks’ importance is about tannins, which are acids, and which put up a strong defense against other insects and diseases. So the wasp is choosing a host that’s already well-defended, and usurping those defenses for its own purpose. Nothing eats oak-leaf galls that we know of.

There are even galls that produce nectar, which attracts carpenter ants and certain hornets, though not honeybees – recruiting another line of defense for the larvae inside.

As for our plentiful woolly galls this fall, he said large outbreaks are common, typically regional in scale, but infrequent in any one area.

There does seem to be a cycle, though nobody knows what it is or what drives it. Certainly it’s not a periodical cycle like cicadas, because there’s no benefit for wasps in the way there is for the 13- or 17-year cicada – a large, slow-growing insect that’s feeding in root tissues that are fairly nutrient-poor.

For the wasp, feeding on the most nutrient-rich portions of the tree, the advantage is in a big population surge that overwhelms any predators.

What I have learned over the years is you’ll have an outbreak of one kind of gall, then years without them, and it’s especially so with woollies, which are produced by many wasp species. Three years ago we were finding them everywhere [in Ohio] — in Cincinnati first, then Dayton, then Columbus and so on — but we didn’t see them before that and we haven’t seen them since. Now it sounds like it’s Minnesota’s turn.

Heck, I have photographs from many years ago, when I was first studying galls and my camera skills weren’t so good, of certain galls that I still haven’t identified for sure. I’m waiting for another outbreak of the same type so I can find out what species I was looking at in the first place!