There was a rapping at the front door one morning last week, a rare occurrence, and as I went to answer it I thought it sounded unusually rapid, possibly urgent.

A UPS delivery was due, but the driver typically announces himself with one quick stab at the door buzzer. … Well, maybe the buzzer wasn’t sounding.

Which would explain the tempo, too. These guys move so fast, the truck is heading away by the time I answer the buzz.

Just as I opened the door, I heard a slightly different clatter and saw the aft end of an airborne young doe. She was leaping from the cedar deck to the lawn, neatly clearing the little garden patch of herbs and flowers she’d been browsing.

Having put six or seven yards between us, she looked back to see if I was going to run her off or apologize for the interruption. Perhaps she expected a tip.

So I stepped out, waved my arms and watched her amble back toward the woods, pausing now and then to make sure I was serious.

This, dear readers, is what I was talking about when I wrote last spring about the challenge of vegetable gardening in country overrun by deer, especially if one shares my distaste for putting up fences.

Now another season of trials and errors has run its course and I can report on the mixed results – horticultural successes and a fenceless deer-control effort that worked really well for a while, right up until it didn’t.

Another proof of straw-bale concept

The 2015 straw-bale garden was my second and I may never try another method for tomatoes, eggplant, herbs, collards, chard and pretty much any other produce except for radishes and onions, which for some reason seem to do better in dirt.

Everything else came in such abundance we had trouble keeping up with it – without tilling and only minimal, late-season weeding.

Having learned the hard way last year that bale-grown tomato vines would topple store-bought cages and cones, I drove stakes of 2×2 pine through this year’s bales and into the ground beneath. This put their tops a couple of feet higher than my head, which wasn’t nearly enough.

I’d chosen vines of the indeterminate kind – red cherries, yellow plums, heirloom Cherokee Purples  – and placed the bedding plants into the bales in late May. By mid-July the cherry and plum vines had reached the tops of their stakes and the Cherokees were catching up. 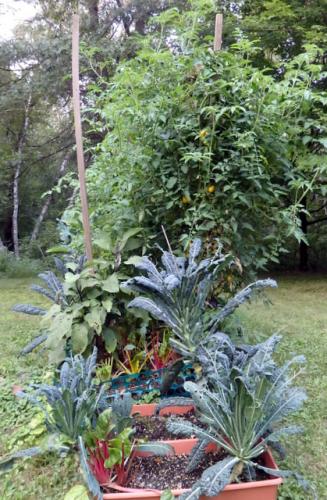 MinnPost photo by Ron Meador
The sweet Cherokees and the low-acid yellow plums were among the best I’ve ever tasted, forcing me to discard a long-held conviction that you can’t grow great tomatoes this far north.

Making journal entries one afternoon I realized I’d been tying and retying tomato vines every second or third day for a couple of weeks. Eventually they rose beyond the stakes, doubled over and grew downward until they reached 13 or 14 feet in overall length. Picking the highest fruit now required a stepladder.

After that the vines became too heavy and unruly and I resorted to cutting away new growth, forgoing an expanded harvest that might have gone to waste anyway.

But it was a nice problem to have. The sweet Cherokees and the low-acid yellow plums were among the best I’ve ever tasted, forcing me to discard a long-held conviction that you can’t grow great tomatoes this far north.

And it was pretty much the same story with the Swiss chard, the Japanese eggplant, the green and purple basil, the collard greens and kale. Things grew so fast I abandoned plans to add spinach, beets and salad greens.

Everything but the chard required staking. By the time the collards reached about four feet in height, I was double-staking them with half-inch bamboo – and still they fell over in a bit of breeze. I began to research freezing the excess.

Around mid-August I saw the first signs of possible deer damage – three large clumps of chard relieved of their leaves, clipped off cleanly at the woody stem, about where I’d cut them if harvesting for the pot.

Under my original plan, this meant it was time to go get the materials and put up a deer fence. So, naturally, I preferred to blame the loss on rabbits. 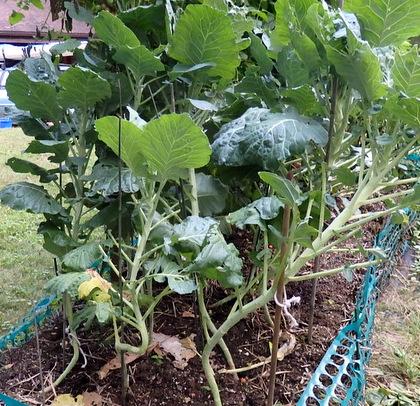 Then the collards showed signs of nibbling, followed by serious chomping. Sigh. Unless we had bunnies standing 3 feet tall at the shoulder, it was time to face the facts and deal with the deer.

About now I remembered Neal Rovick’s suggestion in a comment on my early-season post, that laying out chain-link fence on the lawn around the bales would repel the deer, supposedly because they don’t like the feeling of metal mesh underfoot. Hmm. I wandered out on the Web in search of corroboration.

I found little about chain-link but much about a similar application of poultry netting – what we used to call chicken wire – for the identical purpose of creating a surface the deer find icky to step on. And compared to chain-link, this would be lots lighter, cheaper, simpler to obtain and easier to wrangle into place.

So I got a couple of rolls, 3 feet by 25, for about 40 bucks and went to work with the tin snips. Also, with some anxiety.

Wire fencing is remarkably springy when unrolled, and working with it brought back the stomach-twisting memory of a long-ago day when I was wrangling some heavier fencing. In a moment of inattention I allowed it to get loose and stitch a line of punctures across  my forehead, an inch apart, just above my eyes ….

I mowed the grass extra close around the bales, laid out the wire and weighted it with rocks, suddenly skeptical that it would really deter our hungry deer. But for a few weeks it seemed to do just that.

Then one morning I saw fresh signs of deer damage on a stalk of collards. But this stalk had become unstaked and flopped out sideways, putting its leaves within easy reach of a deer who stood just outside the wire. And there were fresh hoofprints in a nearby onion bed I hadn’t been able to cover with mesh.

By early October, though, there was undeniable evidence the deer were crossing the mesh to strip the remaining collard and kale leaves. They even ate the last eggplant. So last week I pulled up the wire, which took some effort because the grass had grown through it, forming a Velcro-like bond that had to be ripped apart.

So, I dunno. Maybe the wire worked until the grass got long enough that the deer couldn’t feel it underfoot anymore. Which would mean that the trick only works if you lift it every week or so, cut the grass and replace it afterward … at which point it’s at least as much hassle as building a fence.

Now I  have the winter to dig deeper and consider all the options, and to welcome any suggestions from the Earth Journal audience, because a third straw-bale garden is definitely in the plan for 2016.

And I know this guy in Lake Elmo, another area overrun with deer, who swears he’s kept them at bay by ringing his garden with a shallow, 2-foot-wide trench holding a  few inches of pea gravel. It’s attractive, it’s low maintenance, and it’s even pleasant to walk on.

If you’re a gardener, that is. If you’re a deer, according to this theory, the gravel is unbearably icky underfoot.