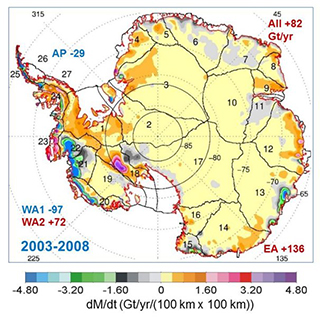 A new analysis by NASA scientists finds that Antarctica’s volume of ice cover is growing overall, with thickening in the continent’s eastern reaches exceeding the well-documented and accelerating losses in the ice sheets of West Antarctica.

This means the amount of terrestrial water locked up as Antarctic ice is actually increasing, rather than decreasing as has been widely assumed, according to the research paper just published in the Journal of Glaciology.

Despite a flurry of unfortunate headlines to the contrary, the researchers do not challenge either the widely accepted measurements of ongoing sea-level rise or any prevailing consensus as to global climate change and its consequences.

Rather, their work is that rarest of events in climate research nowadays – a credible finding, by serious scientists without axes to grind, that calls for rethinking of a significant component in the complex mechanism of changes agreed to be occurring.

And their calculations are a big deal because, to put it simply, if the roughly one-quarter of global sea-level rise currently attributed to melting of Antarctic ice is coming from somewhere else – well, where in the world might that be?

To understand this particular stunner, it’s helpful to begin by thinking of Antarctica not as a single vast block of ice but as a complex collection of snow- and ice-covered regions where ice volumes grow and shrink at different rates.

In general, the Antarctic ice has been growing over the last 10,000 years, since the end of the last ice age, as a warmer and more water-saturated atmosphere increased snowfall over the polar continent. As snow deposits deepened, their weight compressed lower layers into dense glacial ice.

More recently, the overall warming of Earth’s atmosphere has accelerated the melting of ice sheets in some parts of the continent, particularly in intensively monitored portions of  West Antarctica and the Antarctic Peninsula, which curls away toward South America. (These are the zones labeled AP and WA1 in the map at the top).

However, snowfall has continued to add ice volume in other parts of the continent, particularly East Antarctica, the side nearest New Zealand and Australia (and marked EA in the map above).

And while scientists have generally assumed that “drainage” from ice-sheet melting has been shrinking the continent’s ice cover overall, the new study reaches an opposite conclusion.

Having analyzed both high-tech satellite measurements of altitudes across the continent, and factored these against meteorological records on snowfall, the team concluded that surface heights in East Antarctica and the West Antarctic interior have continued to rise even though snowfall amounts have been smaller than was assumed. And that means more ice is being formed.

Here’s how NASA’s announcement summarized the work of a team led by Jay Zwally, a glaciologist at the space agency’s Goddard Space Flight Center:

The study analyzed changes in the surface height of the Antarctic ice sheet measured by radar altimeters on two European Space Agency European Remote Sensing (ERS) satellites, spanning from 1992 to 2001, and by the laser altimeter on NASA’s Ice, Cloud, and land Elevation Satellite (ICESat) from 2003 to 2008.

Zwally said that while other scientists have assumed that the gains in elevation seen in East Antarctica are due to recent increases in snow accumulation, his team used meteorological data beginning in 1979 to show that the snowfall in East Antarctica actually decreased by 11 billion tons per year during both the ERS and ICESat periods. They also used information on snow accumulation for tens of thousands of years, derived by other scientists from ice cores, to conclude that East Antarctica has been thickening for a very long time.

“At the end of the last Ice Age, the air became warmer and carried more moisture across the continent, doubling the amount of snow dropped on the ice sheet,” Zwally said.

The extra snowfall that began 10,000 years ago has been slowly accumulating on the ice sheet and compacting into solid ice over millennia, thickening the ice in East Antarctica and the interior of West Antarctica by an average of 0.7 inches (1.7 centimeters) per year. This small thickening, sustained over thousands of years and spread over the vast expanse of these sectors of Antarctica, corresponds to a very large gain of ice – enough to outweigh the losses from fast-flowing glaciers in other parts of the continent and reduce global sea level rise.

To be more precise, the Zwally paper says that over the 16-year period covered by the ERS and ICESat measurements combined, the thickening of East Antarctic ice held steady – growing at about 200 billion tons, or gigatons, per year despite decreased snowfall.

In the ice-losing regions of West Antarctica and the peninsula, it says, loss rates increased by 65 gigatons per year over the period. This held the continent’s net gain in ice volume to about 112 gigatons per year during the ERS period, 1992 to 2001, and 82 gigatons in the latter period, 2003-2008.

But that is still a lot of additional ice, and it set off some unfortunate playfulness in initial media reports on the study – including an appalling headline in the Christian Science Monitor, whose coverage of climate issues has generally been outstanding.

“Is global warming over?” the Monitor asked, then answered: “Not quite, scientists say.”

A more factual answer would be, “not in the slightest.” The new findings in no way contradict either established assessments of the Earth’s warming atmosphere or, for that matter, undisputed measurements of sea-level rise.

Rather, they suggest that some reattribution is in order by outfits including the Intergovernmental Panel on Climate Change, whose current conclusion is that Antarctic ice losses exceed gains. The NASA announcement, again, quotes Zally:

And though Zwally’s study didn’t attempt to predict the future balance of ice formation and loss in Antarctica, he cautioned against assuming that the current rates will hold forever.

If the losses of the Antarctic Peninsula and parts of West Antarctica continue to increase at the same rate they’ve been increasing for the last two decades, the losses will catch up with the long-term gain in East Antarctica in 20 or 30 years – I don’t think there will be enough snowfall increase to offset these losses.

The full text of the paper, “Mass gains of the Antarctic ice sheet exceed losses,” can be read or downloaded without charge here.