Just ahead of the G20 summit in Turkey that begins on Sunday, two new reports paint intriguing – and very different – pictures of how the world’s largest economies are acting on global warming.

From Climate Transparency comes a finding that “climate action by the G20 has reached a turning point, with per capita emissions falling in 11 members, and renewable energy growing strongly” in 15.

Moreover, its analysis concludes that “there are strong indications that total global energy-related carbon dioxide emissions have stopped rising in 2014, the first such reversal in annual emissions growth in the industrial era, aside from periods of serious economic crisis.”

G20 performance is significant because the roster of the 19 member nations plus the European Union are a close if not exact match with a list of the world’s largest producers of greenhouse gases.

Their governments also provided, according to the other new analysis, subsidies for fossil-fuel production averaging $452 billion in 2013 and 2014 – or about four times the amount of production subsidies paid by all countries of the world to support expansion of renewable alternatives.

In 2009, the G20 leaders pledged to phase out “inefficient” fossil fuel subsidies. But a review of performance data by the UK’s Overseas Development Institute (ODI) and Oil Change International concludes that these were empty promises:

Their continued support for fossil fuel production marries bad economics with potentially disastrous consequences for the climate. In effect, governments are propping up the production of oil, gas and coal, most of which can never be used if the world is to avoid dangerous climate change. It is tantamount to G20 governments allowing fossil fuel producers to undermine national climate commitments, while paying them for the privilege.

Relying on the World Trade Organization’s definitions of subsidy, the ODI analysis found:

Of the three organizations, Climate Transparency is a newer initiative and the least overtly activist in terms of a policy agenda. It was formed in 2014 as “an open consortium of organizations and initiatives with a shared mission to enhance assessments of action on climate change” and communicate “a comprehensive and picture of climate action for key influencers and decision makers.”

A principal source for this analysis was the Climate Action Tracker, a partnership of four research organizations that gathers performance data and assesses progress in 32 countries, responsible for about 80 percent of all global emissions, against the goal of holding global warming below the 2° Celsius target. 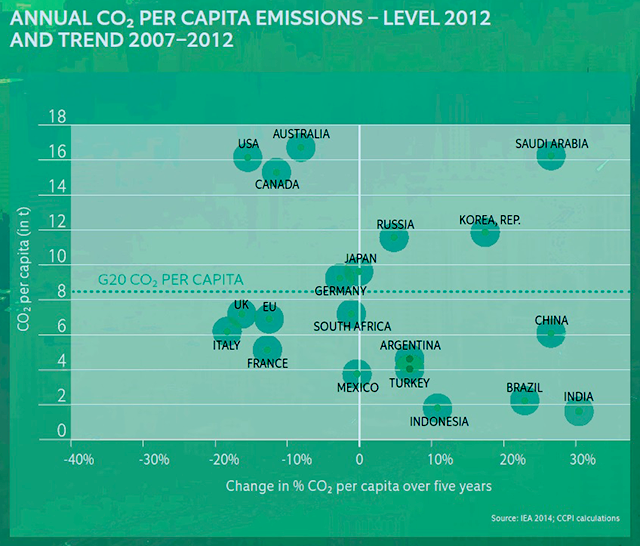 Climate Transparency’s declaration of a “turning point” begins with a trend line over the past 25 years in which global CO2 increased by 50 percent, with the trend line accelerating in the latter half of that period. Per capita emission rates were lower, because population grew faster than fossil fuel consumption, but still rose by 18 percent over the quarter-century.

Drawing on International Energy Agency data for 2007-2012, Climate Transparency found that per capita carbon emissions declined in the United States, Australia, Canada, Japan, Germany, Britain, South Africa, Italy, France and Mexico, as well as in the EU as a whole; they continued to increase in China and India – the most populous member nations – as well as in Saudi Arabia, South Korea, Russia, Argentina, Turkey, Brazil and Indonesia.

Where emissions are declining, Climate Transparency attributes the change in this way:

Renewable energy is continuing its strong growth worldwide. Costs have fallen sharply, and parity with traditional forms of energy is in sight, or already reached. Renewable energy sources are also helping to bring power to the millions of people who do not have access to electricity, where off grid renewable power can be installed faster and cheaper than a grid connection.

Climate legislation has been introduced in many countries and targets have been strengthened over time. Increasingly, there is knowledge sharing and collaboration over policies to promote renewable power, energy efficiency and carbon pricing. A substantial number of countries and regions have introduced carbon markets. Climate mitigation action is increasingly seen not as a cost, but a necessary investment in the future, which brings multiple other benefits.

Progress is not yet occurring fast enough to head off a global temperature rise above the 2° C danger mark, the report says; current per capita emissions worldwide average about 11 tons of CO2 equivalent per year, and that number needs to fall into the one- to three-ton range by 2050.

An important demonstration of the cumulative effect of these developments is that according to the International Energy Agency energy related emissions did not grow in 2014. Such a reversal of GHG emissions growth was previously seen only during periods of economic downturn. This time, it seems that climate policy is working. More ambition is needed, but there is room for hope and optimism.

Although ODI and Oil Change International focused their analysis on the G20’s performance on fossil-fuel subsidies, the policy issues they emphasize are less about this weekend’s summit than the climate treaty talks in Paris that begin Nov. 30.

Claiming that its work “documents, for the first time, the scale and structure of fossil fuel production subsidies and the G20 countries,” the groups say the nearly half-trillion-dollar aggregate “supports a lose-lose scenario” that “calls into question the commitment of governments to an ambitious deal on climate change.”

They are pouring large amounts of finance into uneconomic, high-carbon assets that cannot be exploited without driving the planet far beyond the internationally agreed target of limiting global temperature increases to no more than 2° C. At the same time, they are diverting investment from economic low-carbon alternatives such as solar, wind and hydro-power… .

Several countries have scaled up their pledges to reduce greenhouse gas emissions, but continued subsidies for fossil fuel production raise serious concerns about these pledges and could undermine the prospects for an ambitious climate deal. As well as phasing out national subsidies, G20 governments have a tremendous opportunity to meet the climate challenge by shifting the investment of state-owned enterprises and public finance away from fossil fuel production, towards clean energy.

In the United States, the analysis counts “more than $20 billion in national fossil fuel production subsidies each year, despite calls from President Barack Obama to eliminate industry tax breaks.”

For comparison, it found $23 billion in direct subsidies by Russia, $9 billion by the UK, $5 billion by Australia and Brazil, and $3 billion in China.

However, additional payments by state-owned companies and banks often dwarfed those amounts: $50 billion for Russia, $42 billion for Brazil, and a whopping $77 billion for China.

In the aggregate, the report found that G20 nations provide $78 billion in national subsidies, $88 billion in public finance, and $286 billion in investment by state-owned enterprises to fossil-fuel producers.

One more discouraging snapshot: In the coal sector alone, the analysis found that producers in G20 member nations got almost twice as much public support as private investment — $19 billion versus $10 billion.