When I look back over the most important and influential things I read for Earth Journal purposes during 2015, but mentioned here in passing if at all, five articles stood out a mile. Any of these would merit a spot on your holiday reading list, and all can be accessed online without payment:

1. “Which Came First: the Dinosaur or the Bird?”
Audubon magazine, January-February issue. Michael Balter explains the convergence of ornithology and paleontology in a radical rethinking of avian evolution, which sees birds as “living dinosaurs, the one surviving lineage of extinct carnivorous beasts like Tyrannosaurus rex.”

[I]n 1996, a farmer and amateur fossil collector from China’s northeastern Liaoning Province found a one-meter-long dinosaur embedded in two separate limestone slabs, which he sold to two different Chinese museums. Paleontologists quickly put two and two together and realized that the specimen, which they named Sinosauropteryx and dated to about 125 million years ago, was the first discovery of a feathered dinosaur.

Although a small number of skeptical researchers have since argued that the claimed feathers are really degraded collagen fibers, further discoveries of similarly plumed dinos bolstered the case. Some of them — such as the four-winged Microraptor, first reported from China in 2000 — probably could fly.

To date more than 20 suspected flying dinosaur species have been reported, and there is now an overwhelming consensus that birds represent a lineage of flying dinosaurs that survived the mass dinosaur extinction at the end of the Mesozoic Era, about 66 million years ago. A flood of new genetic research released at presstime confirmed that birds subsequently saw an early, rapid, evolutionary “big bang” that led to the more than 10,000 species we have today. 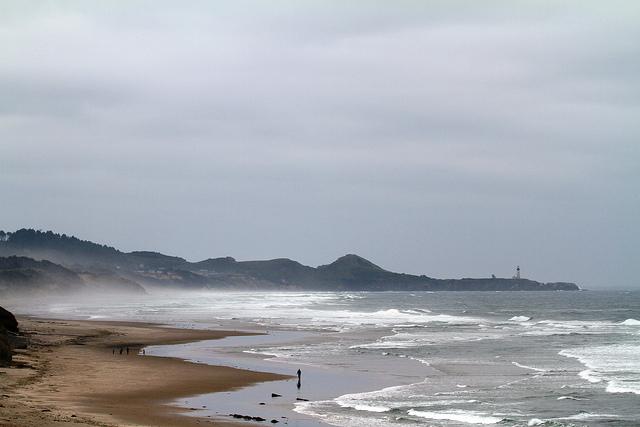 2. “The Really Big One,” The New Yorker, July 20
Kathryn Schulz explains the current scientific thinking which holds that, over the next 50 years, there’s a one-in-three chance of an earthquake destroying most of coastal Oregon and Washington state.

When the next very big earthquake hits, the northwest edge of the continent, from California to Canada and the continental shelf to the Cascades, will drop by as much as six feet and rebound thirty to a hundred feet to the west — losing, within minutes, all the elevation and compression it has gained over centuries. Some of that shift will take place beneath the ocean, displacing a colossal quantity of seawater. …

The water will surge upward into a huge hill, then promptly collapse. One side will rush west, toward Japan. The other side will rush east, in a seven-hundred-mile liquid wall that will reach the Northwest coast, on average, fifteen minutes after the earthquake begins. By the time the shaking has ceased and the tsunami has receded, the region will be unrecognizable. Kenneth Murphy, who directs FEMA’s Region X, the division responsible for Oregon, Washington, Idaho, and Alaska, says, “Our operating assumption is that everything west of Interstate 5 will be toast.” …

Roughly three thousand people died in San Francisco’s 1906 earthquake. Almost two thousand died in Hurricane Katrina. Almost three hundred died in Hurricane Sandy. FEMA projects that nearly thirteen thousand people will die in the Cascadia earthquake and tsunami. Another twenty-seven thousand will be injured, and the agency expects that it will need to provide shelter for a million displaced people, and food and water for another two and a half million. “This is one time that I’m hoping all the science is wrong, and it won’t happen for another thousand years,” Murphy says. 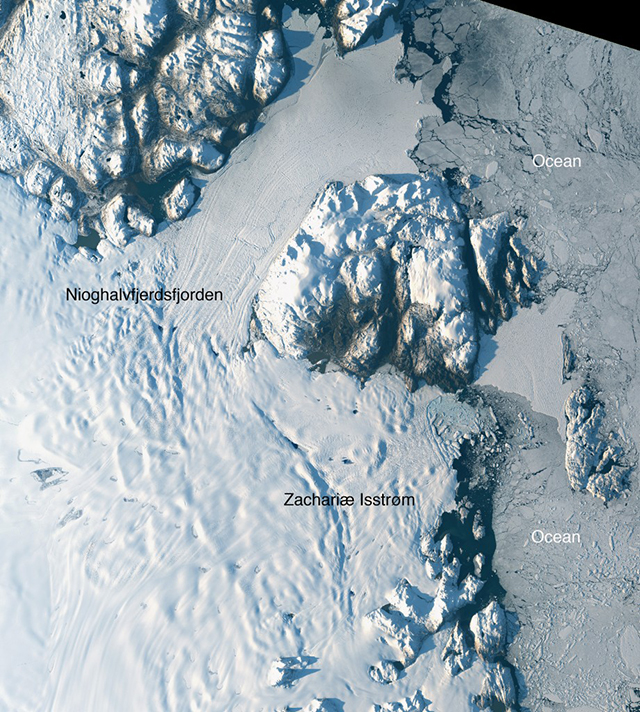 3. “The Secrets in Greenland’s Ice Sheet,” The New York Times Magazine, Nov. 12
Jon Gertner looks at how the planet’s largest glaciers were formed, how their shrinkage is driving sea-level change, and the work of scientists trying to determine “whether we’ll have time to respond to climate change or whether it’s already too late.”

… [T]he Greenland and Antarctic ice sheets are not just big blocks of frozen water. They are giant plumbing systems made from gigatons of ice, snow and slush, honeycombed with buried lakes and hidden rivers. Their size and complexity have long made their behavior difficult to assess and even harder to predict. A few years ago, a NASA-­supported researcher seeking to shed light on the ice sheet’s interior pipes dropped 90 yellow rubber ducks into a Greenland moulin, a deep hole in the ice sheet, with his contact information on them, in case they were found. Only two ducks were recovered — the next year — thanks to a fisherman working in a nearby bay. Somewhere, trapped deep in the Greenland ice sheet, or floating in the waters nearby, or who knows where, really, there are 88 more rubber ducks.

Further complicating matters is the sheets’ constant motion, as their immense weight causes them to flow outward from thick center toward thinner periphery. And the movement isn’t always slow and steady; glaciers extending out from the ice sheet can start, stop, speed up — erratically — as the ice rolls over bumps in bedrock or slides along on sheets of meltwater. More important, a glacier’s edges can break off suddenly and catastrophically into the sea, at times and places that remain difficult to anticipate. Arresting the big problems associated with climate change — punishing droughts, more powerful storms, lethal heat waves — often relates directly to whether human societies can scale back carbon emissions within a reasonable time. But ice sheets are a good example of how rising temperatures can tip natural systems into unknown territory. 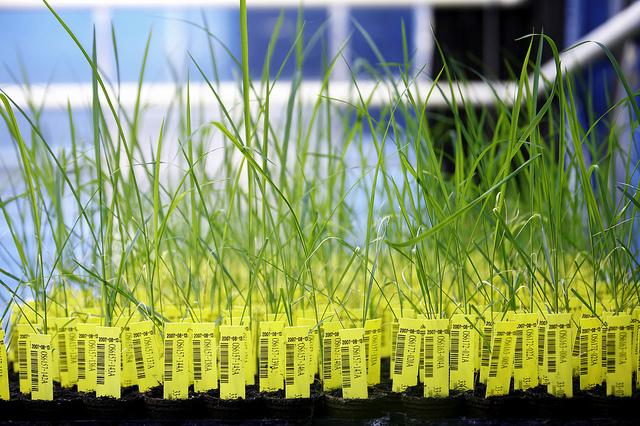 4. “Can GMOs Help Feed a Hot and Hungry World?”
The Nation, Aug. 13. Madeline Ostrander writes about the uphill struggle of researchers like Eduardo Blumwald, unlinked to corporate agribusiness, who seek to genetically modify crops for humanitarian reasons – but face the same foes as patent- and profit-driven outfits like Monsanto, who see all GMOs as Frankenfood.

In the greenhouse, the researchers force the rice to cope with heat and deprive it of water just as it’s about to set seed. So far, the genetically altered rice is outperforming the natural kind — given less moisture, the non-engineered rice browns and wilts, but the new plant survives. Blumwald’s goal is to create crops that won’t keel over as quickly when things get hot, dry and stressful — plants that will improve the odds that a farmer can produce food even in a drought.

In about forty years, relentless dry spells may be more frequent across the Southwest, say climate scientists, and California may have more dry years like this one, in which a drought has crippled the agricultural sector. But the state, one of the most fiercely contested battlegrounds in a worldwide fight over the use of genetically modified organisms (GMOs), isn’t the most inviting home for research like Blumwald’s.

Since the 1980s, activists here have run a series of campaigns to require the labeling of GM products and an outright ban on GMO cultivation. Blumwald says the controversy over GMOs has made it more difficult to pursue his research and obtain funding. 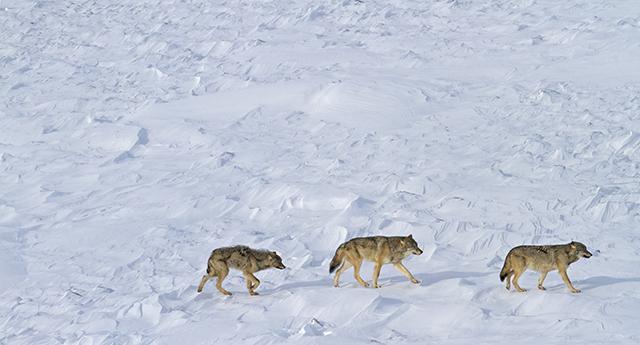 Photo by Rolf Peterson, Michigan Technological University
Taken from the survey aircraft in February 2015, this photograph shows the last three wolves believed to inhabit Isle Royale — two adults and, straggling behind, a deformed and unhealthy-looking pup.

5. “Ecological Studies of Wolves on Isle Royale,” annual report for 2014-2015, March 31
John Vucetich and Rolf Peterson present the findings of the last winter survey with a blend of passion for the subject and scientific detachment from the currently dire statistics.

In February 2015, we counted three wolves in the population. Wolf abundance was down from last year’s count of nine wolves and reached the lowest level on Isle Royale since studies began in 1959.  Since 2009, the population has declined by 88%, from 24 to 3 wolves. These three wolves all lived in the same social group.

One of the three wolves was distinctive with respect to the shape and color of its tail. In particular, its tail was only about half or two-thirds the length of a normal tail, and the  end of the tail was marked with two dark bands. We  have not in previous years seen a wolf on Isle Royale with such a tail. This wolf was also considerably smaller than the other two wolves. Those observations give reason to believe that this wolf was a nine-month old pup. The prospect that this wolf is a pup is noteworthy, in part, because we had not detected any evidence of pups during the summer of 2014.

Even as a pup, this wolf appeared smaller than average. In images taken on February 15th, this wolf was also characterized by a thin waist line (while the other two wolves appeared to have full bellies). This wolf also consistently displayed an unusual posture: a slightly arched back and guard hairs on its back that tended to stand upright. This is not a wolf that we would expect to live for too much longer.

The 5 best articles on science and the environment of 2015