At long last the precedent-setting bid by Waukesha, Wisconsin, to draw drinking water from Lake Michigan is formally in line for approval by all – or rejection by at least one – of the governors whose eight states make up the Great Lakes Compact [PDF], including Minnesota’s Mark Dayton.

This is a very big deal and the outcome couldn’t be more in doubt, according to Peter Annin, who you could fairly say wrote the book on conflicts over our continent’s most precious freshwater resource: “The Great Lakes Water Wars,” published in 2006.

I reached Annin, a former Newsweek correspondent, at his new office at Northland College, where he is teaching and also working on a second edition of  “Water Wars” – necessarily a complete rewrite, he said, in order to address the work of the compact since its inception in 2008, and especially “the super-historical moment in Great Lakes water management” that the Waukesha decision will occasion in the next six months.

He declined on journalistic grounds to judge the relative merits of Waukesha’s case or the counterclaims of its environmentally minded challengers, or to predict which way the decision will go; Wisconsin’s governor, Scott Walker, is on record in favor of approval but the governors of Minnesota, Illinois, Indiana, Michigan, New York, Ohio and Pennsylvania have been mum.

(After I wondered aloud whether a governor could abstain, Annin found out that this is indeed possible – which means that approval requires not eight ayes, as is often reported, but the unanimous support of those voting.)

So we talked at length on Monday afternoon about what’s at stake for Waukesha and for the Great Lakes if this diversion bid is granted, and about his view that approval will require the compact governors to reach accord on four especially thorny points out of the many at issue. In order of importance:

These issues (and more) were addressed by the Wisconsin Department of Natural Resources in its reviews of the Waukesha application, a process that concluded last week with the department’s announcement that it was sending the application to the compact governors with a recommendation it be approved.

That recommendation essentially restated the DNR’s position of last June, before a period for public comment, of which it received plenty. Final versions of the WWU application and DNR assessments will be released next month, Annin said.

But as the governors consider Waukesha’s application, Annin said, they’ll also be thinking a lot about a question that overshadows all the others: If we say yes to Waukesha, then what kind of invitation are we extending to the next community in line, and the next one after that?

Why diversion is so sensitive

In a sense the Great Lakes Compact was established to obstruct, if not outright prevent, withdrawal of Great Lakes water by communities that lie, as Waukesha does, outside the big lakes’ rather small basin.

Because the basin area is so modest in comparison to the lake surface – near Waukesha, the boundary is within a dozen or so miles of the beach – water taken out of the Great Lakes is replaced slowly; hydrologists estimate that precipitation and other inflows add about 1 percent per year to their volume.

Or as Annin likes to say: “The Great Lakes were a gift from the glaciers 10,000 years ago, a water bank account deposited here in the heart of the North American continent, earning interest at the rate of 1 percent per year.” 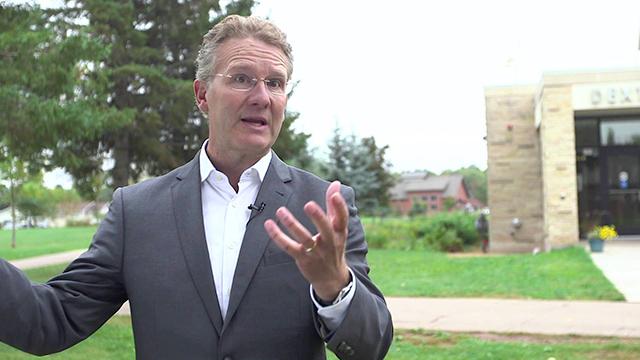 Northland College
Peter Annin: “The compact requires a cutting-edge conservation program, and Waukesha has come a long, long way – but they still have a long way to go. The question is, have they come far enough?”

Waukesha qualifies for consideration under an exception in the compact– some say written with its particular needs in mind – for communities within “straddling counties” that lie partly within the basin. To gain approval, it must prove that it has exhausted all other “reasonable” supply alternatives.

Waukesha estimates its need at 10.1 million gallons a day on average, with a maximum of 16.7 million, but Annin said volume per se is not an issue – especially since WWU decided against exploiting a provision allowing it to return less water than it withdrew, the difference being treated as “consumptive use.”

I think this is one of the more brilliant moves that Waukesha has made from a public relations standpoint – for quite a while, Waukesha was saying we’ll return ‘the vast majority of the water,’ or whatever. Then, in September of 2013, they announced that they would be returning 100 percent of the water.

That’s not required under the compact. It’s sort of above and beyond. And I remember talking with a representative from another state, who said – ‘100 percent return flow! I don’t know what else we’d want besides that.’ It was an important step, and I think it will have a big impact on how other jurisdictions look at their application.

Annin also feels WWU’s challengers have sometimes been unfair in criticizing its planned expansion of its service area, which in fact was mandated by the state.

The DNR in Wisconsin has a great sustainability philosophy when it comes to water, which is that they want municipal sewer systems to marry up with municipal water supply systems – so the plumbing above ground, if you will, matches up with the plumbing below ground.

Because of that, Waukesha’s application goes beyond the area of original need. There’s the area they have right now, which has problems, and the DNR is having them extend that – although, on the other hand, I don’t think Waukesha is doing it reluctantly.

And in the end, the reasons for the expansion may not matter so much as the result, he said.

I think this is an area the rest of the states are going to look at really closely, some closer than others. Because this would be first straddling-county exception under the compact, trails are being blazed that will be followed for decades to come, and everybody gets that. …

We’ve all been assuming from the beginning that, as you know, all it takes is one governor to veto a water diversion application. What’s happening now, with what some are referring to as the Waukesha territory grab, is talk of whether the governors might approve Waukesha’s application conditionally.

As for the availability of adequate alternative supplies, Annin said, the situation is less than perfectly clear. Existing groundwater supplies “have been adequate for years, albeit the treatment [to remove radium contamination from deep wells] is costly, and the blending of water from deep water and shallow water aquifers is complicated and a hassle.”

The deep groundwater aquifer is recovering a little bit, and so people have been using that against Waukesha, but Waukesha has released some research showing that the aquifer should start declining again in coming years, so that’s a debate that’s still out there.

Another hot button aspect issue is Waukesha’s projections of future water use and whether they’re too high. Still another is that the compact requires a cutting-edge conservation program, and Waukesha has come a long, long way. They had a long way to go; the question is, have they come far enough?

And yes, the shallow aquifers in southeastern Wisconsin are under pressure, too, and they’re connected to the surface water systems, so there could definitely be environmental repercussions if Waukesha were to increase its pumping in the event it were denied Lake Michigan water.

Finally, he said, there’s the question of where the returned water, treated to federal standards, re-enters Lake Michigan.

Instead of piping it out and piping it right back, they’re sending it down to a tributary, which is cheaper — they’re dumping the water into the Root River, which flows through Racine, many miles away, and is a steelhead stream. One of the most contentious public hearings was in Racine this summer, where the people are not thrilled with that plan.

Now, the governors may see that as a local issue in Wisconsin. But setting a precedent that the return flow can get kind of convoluted, and tipped into a surface water that’s fairly far away from where the water is withdrawn – it wouldn’t surprise me if that got a look.

The question would be, well, could you withdraw water at Green Bay and return it on the other side of the Door Peninsula? Or withdraw it from Saginaw Bay and return it via the St. Clair River? These were things that people were talking about when they wrote the compact.

In Waukesha’s bid to tap Great Lakes, an expert separates wheat from chaff