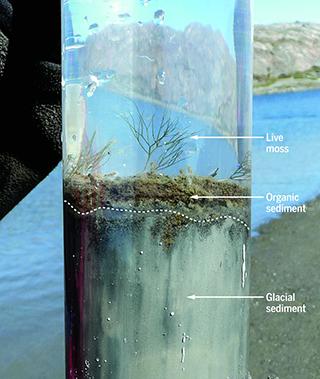 An ice core from west Greenland shows a line marking what scientists call a shift from the Holocene epoch to the Anthropocene with glacial sediments giving way to nonglacial organic matter.

For a generation or so, scientists in certain circles have bandied about the notion of “the Anthropocene” – a new division in Earth’s geologic time scale to reflect humankind’s pervasive influence on planetary systems, especially by driving climate change and species extinction.

Now a  cross-disciplinary team of 22 researchers argues that human-caused change in virtually all the planet’s systems – including its very geology, through the introduction of  “technofossils” and other forms of “new rock” – is so pronounced that future scientists will see our influence as an unmistakable boundary marker in the ice cores, lake sediments and other samplings long used to chart the planet’s 4.5 billion-year-old record.

And this line, they say – already as bright as those marking the emergence and disappearance of the nonflying dinosaurs – can be credibly dated to an event they term the Great Acceleration, which occurred within the lifetimes of more than a few people reading these words.

For most of us, I think, the time scale of our planet’s 4.5-billion-year life span and evolution is beyond apprehension. To overcome this deficit, earth scientists often render the geologic narrative as an imagined calendar year.

A popular version prepared by the Kentucky Geological Survey has the planet’s first living cells turning up around Feb. 25, the first multi-celled creatures appearing  just before midnight on Sept. 3. Following the Precambrian and Paleozoic ages, the Mesozoic – the  “Age of Reptiles” – begins early in the afternoon of Dec. 12, a point corresponding to 245 million years ago.

The fourth and current age, the Cenozoic, begins the day after Christmas, and is divided into two parts, the Tertiary followed by the Quaternary, the latter beginning around 9 p.m. on New Year’s Eve and running for about 1.8 million years, up to the present.

Modern humans stroll into view at 12 minutes till midnight, just in time to struggle with a champagne cork, but still within the earlier of two Quaternary subdivisions, or epochs, called the Pleistocene and Holocene.

The Holocene begins within a minute of midnight – or about 11,700 years ago – with a warming period that brings closure to the last line of great ice ages. If it ends with the dawn of an Anthropocene at the middle of the last century, it will be by far the shortest in the entire geologic record.

Making the case for change

As you might expect, changing the world scientific community’s standard time scale takes a little more effort than revising a Wikipedia entry.

The new paper acknowledges a diversity of opinion, among serious thinkers on the Anthropocene, on where to draw the starting line (footnotes omitted):

Proposals for marking the start of the Anthropocene have included (i) an “early Anthropocene” associated with the advent of agriculture, animal domestication, extensive deforestation, and gradual increases in atmospheric carbon dioxide (CO2) and methane (CH4) levels thousands of years ago; (ii) the Columbian Exchange of Old World and New World species associated with colonization of the Americas; (iii) the beginning of the Industrial Revolution at ~1800 CE; and (iv) the mid-20th century “Great Acceleration” of population growth, industrialization, and mineral and energy use.

Although agriculture and deforestation began to increase atmospheric carbon dioxide as long as 8,000 years ago, the authors say, the global human population wouldn’t reach 1 billion until roughly 4,000 years ago. With the rise of industrialization in the mid-1800s, of course, population growth and impact both accelerated – but not in a linear way.

Although this population growth is commonly thought to have increased exponentially through the 19th and 20th centuries, recent analyses suggest that it can be differentiated into a period of relatively slower growth from 1750 to 1940  and one of more rapid growth from 1950 to 2010. The inflection point at ~1950 coincides with the Great Acceleration, a prominent rise in economic activity and resource consumption that accounts for the marked mid-20th century upturns in or inceptions of the anthropogenic signals detailed below.

Selected examples that struck me as especially compelling:

There are discussions, too, of accelerating trends in sea-level rise and species extinction rates, among many others. But some of the most interesting points – and most stratigraphically germane – concern the many ways in which modern activity has changed the makeup of the earth’s very surface with the addition of new, manmade materials. A key excerpt, somewhat compressed:

Recent anthropogenic deposits, which are the products of mining, waste disposal (landfill), construction, and urbanization, contain the greatest expansion of new minerals since the Great Oxygenation Event of 2.4 billion years ago [which wiped out about 90 percent of terrestrial life, then dominated by anerobic bacteria], and are accompanied by many new forms of “rock,” in the broad sense of geological materials with the potential for long-term persistence.

Elemental aluminum, which was almost unknown in native form before the 19th century, has seen 98% of its cumulative global production since 1950. Concrete, which was invented by the Romans, became the primary building material from World War II onward. The past 20 years account for more than half of the  concrete ever produced.

Manufacture of new organic polymers (plastics), which were initially developed in the early 1900s, rapidly grew from the 1950s to an annual production in 2013 comparable to the present human biomass. The decay resistance and chemistry of most plastics suggest that they will leave identifiable fossil and geochemical records. [!! ]

Fossil fuel combustion disseminates unburned particles as black carbon, inorganic ash spheres (IASs), and spherical carbonaceous particles (SCPs). Black carbon increased markedly toward the end of the 19th century, and especially after about 1970, with a peak around 1990. IASs, which are locally detectable in the stratigraphic record starting in the 16th century, increased across Britain, Scandinavia, and North America from 1835 to 1960. SCPs, which were first recorded at various sites in the UK from 1830 to 1860, show a near-synchronous global increase around 1950, with peak signatures from the 1960s to the 1990s. Being airborne particulates, all leave a permanent marker within both sediments and glacial ice.

Analogous to biotic fossil remains, these so-called technofossils provide annual to decadal stratigraphic resolution—far greater than what can be obtained from the first and last appearances of fossil taxa, which have traditionally been the most common means of correlating stratal sections.

The abstract and full text of this fascinating paper, “The Anthropocene is functionally and stratigraphically distinct from the Holocene,” can be found here, but unless you’re a Science subscriber or member of the American Academy for the Advancement of Science, you’ll have to pay for full-text access.