Although world prices for fossil fuels are at 10- and 12-year lows and still falling,  worldwide investment in renewable energy set records last year and is still growing, according to a fresh analysis from the respected Bloomberg New Energy Finance.

In addition to low prices for conventional fuels, which in the U.S. are helping natural gas to kill coal plants and driving car shoppers back toward SUVs, the Bloomberg analysts found that three factors ought to have held down the global investment total last year – but didn’t.

Weakness in European economies that have been leading on renewables did rein in new investments, but not enough to offset surging gains elsewhere.

The strong U.S. economy should have reduced the dollar value of investments made in other currencies; similarly, falling prices for solar photovoltaic components should have made equivalent investments appear to be worth less over time, not more.

“These figures are a stunning riposte to all those who expected clean energy investment to stall on falling oil and gas prices,” said Michael Liebreich, chairman of the advisory board at Bloomberg New Energy Finance, in announcing the findings.

Wind and solar power are now being adopted in many developing countries as a natural and substantial part of the generation mix: they can be produced more cheaply than often high wholesale power prices; they reduce a country’s exposure to expected future fossil fuel prices; and above all they can be built very quickly to meet unfulfilled demand for electricity.

And it is very hard to see these trends going backwards, in the light of December’s Paris Climate Agreement.

Where are the new investments coming from, and why?

The Bloomberg analysis breaks the data down in multiple ways, defining “clean energy” to include wind, solar and biomass initiatives at various scales, from rooftop PV arrays to offshore wind farms, as well as hydroelectric plants with an output under 50 megawatts (MW).

(FWIW, a footnote in the analysis pegs new investment in large hydro during 2015 at $43 billion, which if counted would bump the global grand total by 13 percent, to $371.9 billion.)

Among nations, China was the world leader, and not for the first time; its overall clean-energy investment of $110.5 billion, up 17 percent from 2014, accounted for roughly one-third of the global total. Most of that went to wind and solar installations as the country tries to meet growing electric power demand while slowing the surge in air pollution from coal plants, which continue to proliferate.

No. 2 in the world was the United States, where investment rose 8 percent to $56 billion, the nation’s largest annual tally since 2011. 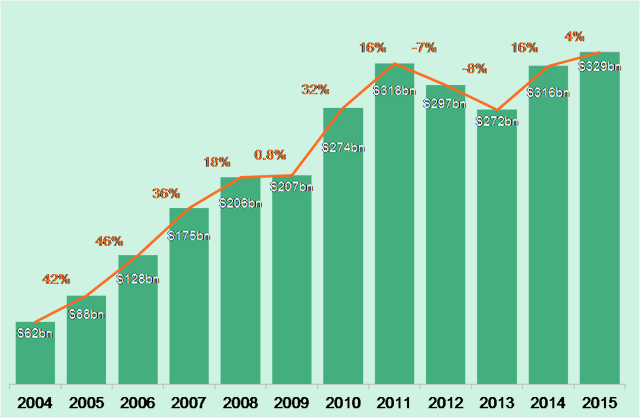 Africa and the Middle East are two regions with big potential for clean energy, given their growing populations, plentiful solar and wind resources and, in many African countries, low rates of electricity access. In 2015, these regions combined saw investment of $13.4 billion, up 54% on the previous year.

By project type, Bloomberg found that more than half the world’s new clean energy investment went to “utility-scale projects such as wind farms, solar parks, biomass and waste-to-energy plants and small hydro-electric schemes.”

And among these, the biggest of the big were large offshore wind arrays in the North Sea and off the Chinese coast.

These included the UK’s 580 megawatt Race Bank and 336 MW Galloper, with estimated costs of $2.9 billion and $2.3 billion respectively, Germany’s 402MW Veja Mate, at $2.1 billion, and China’s Longyuan Haian Jiangjiasha and Datang & Jiangsu Binhai, each of 300MW and $850 million.

The biggest financing in onshore wind was of the 1.6 gigawatt Nafin Mexico portfolio, for an estimated $2.2 billion. For solar PV, it was the Silver State South project [in Nevada], at 294MW and about $744m, and for solar thermal or CSP, it was the NOORo portfolio in Morocco, at 350MW and around $1.8 billion. The largest biomass project funded was the 330MW Klabin Ortiguera plant in Brazil, which in addition to the construction of a 1.5-million-ton cellulose production plant, had a total investment of $2.3 billion, and the largest geothermal one was Guris Efeler in Turkey, at 170MW and an estimated $717 million.

However, smaller-scale and distributed generation projects also attracted investment of about $67.4 billion, or 12 percent more than in 2014; Japan was by far the biggest market for rooftop and other small-scale projects, followed by the U.S. and then China.

Grid-related investments in such items as utility-scale battery storage and “smart grid” control systems attracted $20 billion last year, up 11 percent. Research and development, both corporate and by governments, rounded out the list at $28.3 billion, just 1 percent higher than in 2014.

Additional materials on the Bloomberg New Energy Finance analysis can be found here, including a “public fact pack” you can obtain by providing an email address and contact info.