Minnesota is The Land of 10,000 Lakes, as we all know from the license plate (and most of us know that’s actually a lowball figure, even if the count is limited to lakes of significant size).

Together with rivers and streams, as scientist Deborah Swackhamer pointed out at an Earth Journal program on Monday evening, these reservoirs of fresh water bless Minnesota with more surface freshwater than any other state except Alaska.

Yet this state is experiencing significant problems with this most fundamental of natural resources, and can look to even larger challenges on the not-so-distant horizon — including fundamental scarcity.

Some of the better known problems concern degradation of surface waters by agricultural runoff and other polluting inputs. Less well known are issues of groundwater supply, as consequences of usage and management practices that have treated this out-of-sight, out-of-mind source as limitless.

One of the great delights of hearing Swackhamer present on this subject is also one of the great difficulties in writing about it afterward: She is such a master of clarity, coherence and concision that it’s difficult to add any value for readers by paraphrasing or summarizing  her remarks.

So instead I think I’ll just excerpt her comments on a few key points, with some reordering and light compression in places to save some space.

Record of scholarship and service

But first, for those who don’t know her, a quick tour of her formidable professional background (a fuller version can be found here).

Deborah Swackhamer, Ph.D., taught at the University of Minnesota’s School of Public Health and Humphrey School of Public Affairs from 1987 until retiring to emeritus status last summer, and for a dozen years headed the U’s Water Resources Center. She led the effort to produce the Minnesota Water Sustainability Framework, a 2011 document meant to inform and guide policy for the next quarter-century and beyond.

Her special focus has been on water chemistry and toxicology, and her interest in seeing science inform policy has led to a variety of public-service appointments – some of which continue in retirement – with organizations including the U.S. Environmental Protection Agency, the International Joint Commission and the National Academy of Sciences.

I may have embarrassed her slightly in saying by way of introduction on Monday that she’s the best person on Earth to talk about water sustainability in Minnesota. But in truth I believe that to be a fair statement of her qualifications.

Let’s start with water supply – a lot of people in Minnesota are very surprised that this is an issue. The problem is, we’re using lots of groundwater.

In the metro area, over the last 60 years, we’ve gone from using 90 percent surface water to only about 25 percent. The rest is being supplied by groundwater.

Why is this? Well, because we built those suburbs and those seven counties got bigger and bigger, and they dug wells. It was a lot easier to dig a well and get clean groundwater than it was to pipe water from the Mississippi River, as Minneapolis and St. Paul continue to do.

But now the population is dominated by these suburban communities that use groundwater, and the problem with groundwater is,  you run out of it. It doesn’t get replenished in the same timeframe that surface water does – every time it rains, or snows, once a week, twice a week.

This is a hydrograph [below] that shows the level of groundwater as monitored by the DNR at a site out by Lake Minnetonka, that they have data from the 40s: a steady decline in that groundwater; it’s not coming back in the timeframe we’re using it. This is unsustainable by definition. 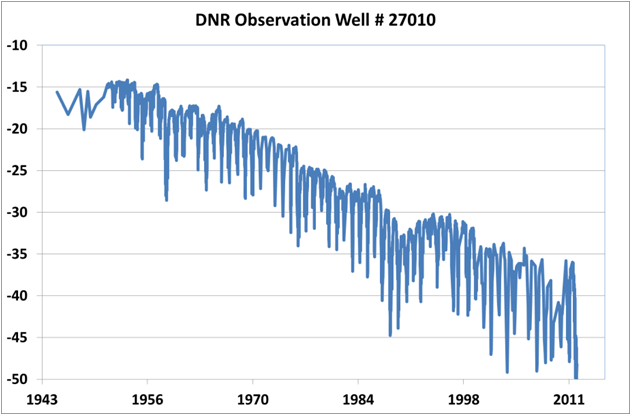 The Met Council has done modeling to show the vulnerabilities of our groundwater system in the future. If we continue on this path, the red areas [see map in video above] show where we will have less than 50 percent of the water supply needed by 2030. We’re going to run out of water in the metro if we don’t do something about how we’re using groundwater.

There are dozens of areas around the state where this is happening. Wells are running dry.

The algal blooms that you see in Lake Minnetonka, or in the southwest and southeastern parts of the state – lots of green stuff growing in the water by the time you reach midsummer – that’s excess phosphorus.

Excess nitrates are a public health concern. They can kill babies under the age of six months if they’re exposed to water with nitrates above state standards.

This particular map [below] shows excess nitrate in private wells in the state. The red are where wells violate that public health standard, and the orange means it’s getting close. 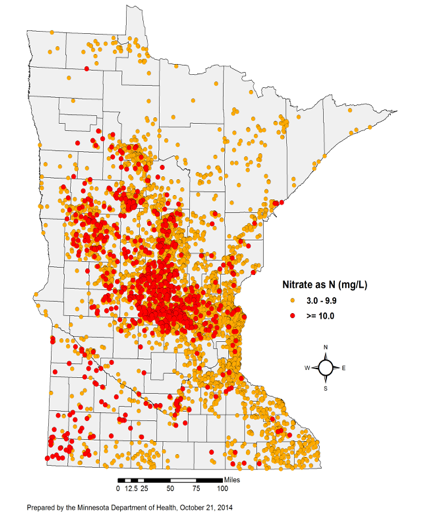 The state has done a whole bunch of things. There’s a whole new monitoring plan at the watershed scale to manage regulated pollutants. They’re pursuing something called WRAPS—Watershed  Restoration and Protection Strategies. We have the best plan in the country for figuring out how much of our water is impaired and how to fix it …

We have, of course, the governor’s buffer initiative. All this stuff we’re doing at the state level, is it working? Well, phosphorus might be going down, but nitrates are going up!

If we were to meet the reduction goals, it would require drastic changes on our landscape. We would have to change some of what is grown in the state of Minnesota. That’s a big, disruptive change – not just using a little less nitrogen in corn, but changing what is grown.

Let’s move on to chemicals of emerging concern. There are hundreds of potentially toxic chemicals in our water supply. They come from all over the place: food containers, household products, makeup, consumer goods, veterinary pharmaceuticals used in livestock, from our own pharmaceuticals, both through  excretion and improper disposal – and the effects are huge.

We know that many of these kinds of chemicals affect human reproduction, development and growth of our children, they contribute to heart disease and diabetes and obesity. We know they affect not just those who are exposed, they affect the children of those that are exposed. …

These are insidious problems, very difficult to regulate because we don’t have a clear cause/effect relationship. And, yes, they are found in both groundwater and surface water.

There is a lot of federal money for water infrastructure, and the state has been pretty generous in matching that, and coming up with ways – but over a 20-year period, there’s a gap: Minnesota needs about $10 billion just to fix its aging water infrastructure.

Now the governor has actually put forward, in his bonding bill, which we’ll hear about once the session opens, a plan to fill that gap. And it’s a pretty good plan. It’s a smart plan.

At the federal level, the gap is about $10 trillion to address drinking water and wastewater infrastructure problems. And now we know that the problems do lead to something – Flint, Michigan.

We need to make sure that each of us is responsible for our water – where it comes from and where it goes.

I love to push for real water pricing in this state, but communities that have tried to do that have been badly beaten back by citizens saying, I’m used to paying pennies for my water – how dare you ask me to pay nickels? No. I’m not going to do it.

So these referenda get voted down all the time. But it’s something for you to think about in your own local communities.

Minnesota is a microcosm of the country – every issue we face here can be listed as a national issue . So what Minnesota does is actually watched by every other state and certainly by the federal government.

The other hard thing about writing up a Deb Swackhamer talk is that after laying down well past a thousand words, you realize you’ve barely covered the surface. But enough for now, and stay tuned: We’ll post a video of the whole program soon.

With all those lakes and aquifers, could Minnesota run short of water? Um, yes.