“It isn’t easy to pass down the aisles of those three rooms without stopping, even in an emergency, but that time I stopped only once, where a group of Miltonia roezlis were sporting more than fifty racemes on four feet of bench. It was the best crop of Miltonias that Wolfe (and Theodore) had ever had.”

Valentine’s Day is near, I notice, and so it’s time for me to go shopping for Sallie at Home Depot or possibly Cub Foods, depending on who has the best selection this year.

A nice pair of rubber gloves, you ask? A fresh whiskbroom-and-dustpan set?

No. As always the objective is a fine new orchid, and while orchids are available from plenty of flower shops and specialty growers, Home Depot has been lucky for us year after year; prize winners have been found among its offerings.

And now I see that in Stillwater, at least, Cub Foods is seizing a competitive opportunity.

All of which adds to the evidence, I think, of how these unearthly blooms are continuing to colonize mainstream American homes as relentlessly as they have colonized all of Earth’s continents except Antarctica, their image evolving from fragile greenhouse specialty to leather-tough houseplant well suited to ordinary indoor habitats.

Even if, like me, you don’t much care for indoor flowering plants you may still find it as difficult to breeze by a typical Depot orchid array as Archie Goodwin found it to rush through Nero Wolfe’s Miltonias.

Orchids can do that to you.

“[O]rchids are not simply beautiful.  Many are strange-looking or bizarre, and all of them are ugly when they aren’t flowering. They are ancient, intricate living things that have adapted to every environment on earth. They have outlived dinosaurs; they might outlive human beings. … They are at once architectural and fanciful and tough and dainty, a  jewel of a flower in a haystack of the plant.” 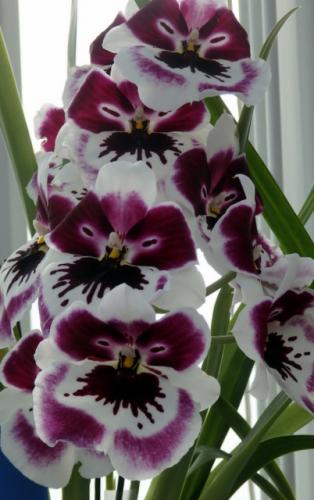 I should say right off that you’re unlikely to find a Miltonia at a big-box retailer, but if you know what a Miltonia is you surely know that too.

Phalaenopsis is the genus that will comprise at least 90 percent of the offerings, with the occasional Dendrobium or Oncidium thrown in. But unless you’re a serious collector, so what?

It’s a curiosity of orchids that species within a genus, like Phalaenopsis or Paphiopedilum, produce blossoms in so many different colors, sizes and shapes that you might wonder how they were ever grouped together in the first place. (Another quirk is that, unlike other house and garden plants, orchids have resisted the application of nicknames in place of the Latin; fanciers may talk of “phals” or “paphs” or “dendros,” but that’s about as informal as it gets.)

Thanks, I guess, to DNA examination, some of these long-established classifications are being gradually though radically rewritten. Highly lookalike varieties are being assigned to separate groupings based on their genes; other varieties that could hardly look less related are joining the same genera.

A couple of weekends ago, at the Orchid Society of Minnesota’s annual Winter Carnival show, I discussed this point with a society representative standing beside a display of prize-winning Oncidiums.

He explained that the old genus assignments were made partly on the basis of blossom shape and color, partly on foliage, partly on native growing locale – and, often, partly on classifier whim or other factors that in retrospect seem equally random.

Pointing to a handy, tiny-blossomed specimen, he gave another listener the introductory lesson on What Makes an Orchid an Orchid: a blossom structure consisting of three sepals radiating from a common center, like the spokes in the Mercedes-Benz emblem, and behind them another radial of three petals, oriented opposite the sepals.

Problem was, he was suddenly confused about which parts of this particular blossom were the sepals and which were the petals.

Orchids can do that to you, too.

“He told Wolfe he was extremely sorry, he apologized, but he would be able to include only twelve Phalaenopsis Aphrodite in the shipment instead of twenty, and no Oncidium flexuosum at all.”

Sallie is partial to the paphs, many of which are known as ladyslippers (although the wild orchid that is Minnesota’s state flower, the pink and white lady’s slipper, is a Cypripedium). She likes the characteristic feature of one large, downward-drooping, pouch-shaped petal, called a labellum or lip, which serves to attract pollinating insects (and to my eye resembles the death-trap apparatus on the pitcher plant).

Part of our reason for going to the orchid show this year was to replace a rare fatality in our little home collection, a ladyslipper that spent a healthy four years with us but abruptly sickened and died of causes unknown. Happily, she found an identical plant from the very same vendor, along with the advice to try a pot with ventilation openings in the walls – your ladyslippers hate wet feet.

I am more than happy with the ubiquitous phals – especially, this year, with a plant whose 4-foot-long raceme is still weighted with seven of the dozen big white blooms that started to appear last September.

But lately I’ve been rereading the Nero Wolfe detective novels, where I first encountered the mystery of orchids, and this put me in the mood for a little more variety; after talking orchid anatomy with the expert, I thought I might keep an eye out for Oncidiums as we browsed the vendors’ tables.

The one I settled on – an Oncidium Ron’s Rippling Delight, 15 inches tall, with blooms like deep-sea creatures – is a manmade hybrid, an example of the human inability to let well enough alone. Well enough in this case being upward  of the estimated 20,000 orchid varieties produced by normal evolution.

I’ve had a reflexive sort of a policy of sticking to “natural” varieties in the past, but when they give such an awesome orchid your name, I guess it does something to you.

In 1877 [Charles Darwin] published a book called “The Various Contrivances By Which Orchids Are Fertilized by Insects.”  In one chapter he described the strange orchid had found in Madagascar — an Angraecum sesquipedale with waxy, white star-shaped flowers and ‘a green whip-like nectary of astonishing length.’

The nectary was almost twelve inches long and all of the nectar was in the bottom inch.  Darwin hypothesized that there had to be an insect could eat the unreachable nectar, and at the same time fertilize  the plant — otherwise the species couldn’t exist. Such an insect would have to have a complementarily strange shape.

More than most years, I noticed at this year’s show the remarkable diversity in size, shape, coloration and what I suppose I’d call anatomical modification represented by the orchid-viewing humans.

Plenty of fanciers who crowd the McNeely Conservatory in Como Park for these shows are as ordinary-looking as could be … except for the camera gear. They train lenses you could use to shoot from the sidelines of the Super Bowl on blossoms that sit still,  inches away.

Plenty of others are as, well, unusual as you might encounter at closing time at the State Fair.

I’m thinking now of the bare-armed woman inked from shoulders to wrists with unbroken floral array featuring, oddly, not a single orchid I could spot from a respectful distance; the artist seemed to prefer roses, irises and lilies, which I suppose are pretty, too, in their own limited way.

There was a man with a close-cropped, jet-black beard outlining his jaw and a skinny, floppy, crimson mohawk marking the fore-and-after centerline of his bald skull. A woman with yards of fat red yarn woven into nearly knee-length dreds that might or might not have been her own raven hair.

Any number of girls and women, from grade school to Social Security age, abloom in bright tights, flowing silks and stiff, taffeta-like fabrics that gave an impression of flower petals, or maybe I mean sepals.

One could speculate endlessly on what such costuming is intended to attract, or repel.

I preferred instead to think about the lengths our species will go to in its quest for apparent individualism, for  superficial diversity – a sort of mimicry of the speciation that the world’s myriad, still uncounted orchids display by evolutionary accident.

Orchids can do that to you, too.