Significant political opposition appears to be building in the Great Lakes basin as a precedent-setting request by Waukesha, Wisconsin, to draw drinking water from Lake Michigan heads toward resolution in the next several months.

That’s the main message I took from an informal meeting of Minnesota legislators on Wednesday afternoon.

The session was organized by Sen. Ann Rest, DFL-New Hope, who has been deeply involved with the eight-state Great Lakes Compact, created in 2008 to bar diversions of Great Lakes water outside the basin except in exceptional circumstances. An exception requires unamimous approval from the governors of Minnesota, Wisconsin, Michigan, Illinois, Indiana, Ohio, Pennsylvania and New York.

Rest wrote the legislation by which Minnesota became the state to join the compact, and is also a past chair of the Great Lakes Legislative Caucus, which is now on record as finding that Waukesha’s circumstances aren’t yet sufficiently exceptional to justify approving its request. So is an association of mayors of Great Lakes cities called the Great Lakes and St. Lawrence Cities Initiative.

Philosophically speaking, Wednesday’ discussion wasn’t round so much as semicircular, focused on the opposition side of issues surrounding the Waukesha bid. 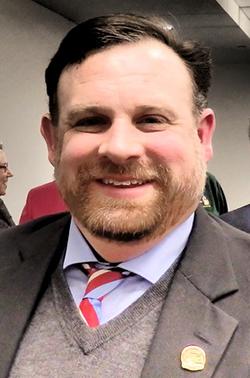 The principal speaker was Wisconsin state Rep. Cory Mason of Racine, who has become a leading challenger to the Waukesha proposal. He said he made the trip to St. Paul because, despite endorsement of the plan by his state’s Department of Natural Resources, “I want people to understand this is not a universally loved idea in Wisconsin.”

The eight Minnesota lawmakers who attended were all DFLers, all but one from metro-area districts, and those who indicated their leanings by comment or question were plainly skeptical  of  the Waukesha bid if not already opposed.

Waukesha was ably represented in the room, if not at the table, by Mayor Shawn Reilly and the water utility’s general manager, Dan Duchniak. They sat in observers’ seats with the reporters, environmental advocates, agency representatives and assorted others, ready to answer questions that were never asked, although their handouts seemed to have as many takers as Rep. Mason’s.

Of course, legislators have no official role in determining Waukesha’s fate, and their unofficial influence will be determined by their governors.

Gov. Mark Dayton will be advised by his own DNR, whose point person on the Waukesha review, Julie Ekman, was also among the observers on Wednesday. She told me that the DNR’s focus will necessarily be technical and focused on the adequacy of its sister agency’s assessment of the Waukesha plan.

But as I think everyone understands by now, the matter before the governors is not merely a technical decision but a political one. Further, its framing extends beyond the merits of this proposal to anticipate other diversion demands that may follow if Waukesha becomes the first city authorized under the compact to withdraw Great Lakes water for users outside the basin.

Or, as Rest put it yesterday, “People are going to look with great thirst at our Great Lakes to solve their water problems.”

Concerns about return flow, too

Rep. Mason’s concern is not just with the water that Waukesha would take from the lake but the return flow of treated sewage to Lake Michigan via the Root River, which runs through Racine (a city whose name, he pointed out, translates from the French as “root.”)

That’s a cheaper solution than constructing a new pipeline, but it amounts to a considerably enhanced stream flow in the Root, which is already listed as an impaired waterway. To people in Racine, Mason told me in a followup conversation yesterday, the idea amounts to “treating Racine as Waukesha’s toilet.”

That aspect of the Waukesha plan stirred considerable interest among the Minnesota lawmakers, second perhaps only to the city’s intention to expand the water utility’s service area by nearly double – from about 20 square miles to about 37 – and to increase potential water use accordingly.

Reilly and Duchniak told me that the expansion isn’t really Waukesha’s idea or preference, but has been essentially been forced on the city by state law and policy that require, as a principle of good planning, that a city’s service areas for water and for sewers match geographically.

Most homes in the expansion area are still on private wells and septic systems, they said, and it’s anybody’s guess how quickly they will convert to city services. And in any case it doesn’t really change the impact on the Great Lakes water resource since all the water taken out will be returned after being treated to federal standards.

In Mason’s view, that’s exactly backwards. He believes Waukesha invited this application of policy to its situation as cover for an expansion it wanted to undertake anyway, and obtained the cooperation of a development-oriented DNR that “said from the outset that Waukesha should apply for the broadest possible service area under the compact.”

Authorship of the expansion may matter a lot in Waukesha County, or even in Madison, but it’s not clear that it counts for much elsewhere in the basin. In its resolution opposing the diversion proposal [PDF], the Great Lakes Legislative Caucus said that while the expansion may be supported by state law,

[W]e share the concern raised by many that this approach could violate the standards of the Compact and its definition of what types of communities are eligible to apply. The expanded service area gives the appearance to some that the Waukesha application is primarily designed to address the water utility’s desire for growth and less about addressing a drinking water problem.

Rest put it a little more bluntly when she voiced “great skepticism about granting an exception to the compact just because a city wants to grow its population.”

During the public comment portion of the Wisconsin DNR’s technical review, Mason told me, the agency received 3,600 comments on the Waukesha proposal, of which 3,300 were opposed.

Reasons ranged all over the map, from the service area expansion, to the adequacy of Waukesha’s efforts to meet its needs in other ways, to the ability of other more than other 40 other Wisconsin communities to treat their drinking water for the radium contamination that is a main component of Waukesha’s woes.

“I really thought the DNR would adjust the application substantially to address these points,” he said, “but no substantive changes were made. This remains a plan for urban sprawl masquerading as a drinking water problem.”

The compact’s governors are expected to make their decision sometimes in June, and Mason said it’s simply too soon to guess how the proposal will fare with the seven besides Wisconsin’s Scott Walker, whose support has been taken for granted. He hopes and expects that meaningful attention will be paid to public comments gathered in venues that include a public hearing in Waukesha on Feb. 18, Dayton’s “Water Summit” on Feb. 27, and an online form.

“None of the other governors have indicated how they’re leaning,” Mason said, “which is appropriate and which I respect.

“But the way I look at it, Waukesha has to find seven more votes in favor. All I need to do is find one against.”