Humankind’s globe-warming activities are clearly amplifying severe weather events, and an era of uncertainty about this cause-and-effect relationship is fading as researchers view unusually potent heat waves, droughts and downpours through the new lens of what could be called the science of extreme weather attribution.

That’s the conclusion of a new analysis published Friday by the National Academy of Sciences, which assessed the scientific rigor underpinning a body of research work in this field. And a strikingly young field it is, too: The preface dates its birth to a 2004 analysis of climate change’s role in the summer heat wave that killed tens of thousands of people across Europe in 2003.

Of course, that was hardly the first time that people attuned to the risks of an overheated atmosphere were asking whether this drought or that hurricane could be traced to the changing climate.

But climate scientists and meteorologists typically have opted for a double-edged, we-don’t-really-know kind of response.

On the one hand: Yes, the future is likely to see shifts toward certain types of extreme weather. But on the other: No, we can’t really say that present-day events are consequences of such shifts.

The new study cautions that questions along the lines of, “Did human induced climate change cause the deadly heat wave of 2003?” are poorly framed and likely to resist a scientifically satisfactory answer.

It suggests a bit of reframing, to something more like, “Has human influence on the climate increased the frequency or intensity of events like the heat wave of 2003?”

I leave it to you to opine whether that’s a minor or major recasting of the question. The important thing today is the answer, and this report’s conclusion that for a variety of severe weather events already occurring, the answer is a highly confident Yes.

Not all types of severe weather events are equally susceptible to the analytic tools of attribution science, the report cautions. Those tools are of three main types: a strong understanding of the physics that underlie extreme events, sufficient observational data to know what constitutes the history of “normal” and “extreme,” and computer modeling that’s capable of replicating – and thus dissecting – an extreme event.

The report was written by a team of scientists chaired by David Titley, a retired rear admiral and former chief oceanographer of the U.S. Navy, who now teaches meteorology at Penn State and founded the school’s Center for Solutions to Weather and Climate Risk.

You get the feeling he’s been asked about Hurricane Sandy once or twice or a hundred times too often. From a news release that Penn State issued concerning the new work:

The committee found that scientists can now confidently attribute some heat waves and cold events, and to a lesser degree droughts and extreme rainfall, to human-caused climate change. Even a decade ago, many scientists argued that research could not confidently tie any specific weather events to climate change, which the committee reports is no longer true today.

More sudden and/or violent events, like Hurricane Sandy, are more resistant to attribution because of specific deficits in our knowledge of them, he explained – which is all the more reason to study them closely:

Attributing the cause of extreme weather to climate change or other factors can “enhance scientists’ ability to accurately predict and project future weather and climatic states,” said Titley. Predicting both the frequency and intensity of extreme events — those that are rare in a location — could allow society to lessen their impact and potentially avoid loss of life and destruction.

The committee ranked nine types of severe weather event according to the current state of scientific understanding as to how climate drives certain types of events, and scientists’ level of confidence that individual events can be attributed to a climate-change driver: 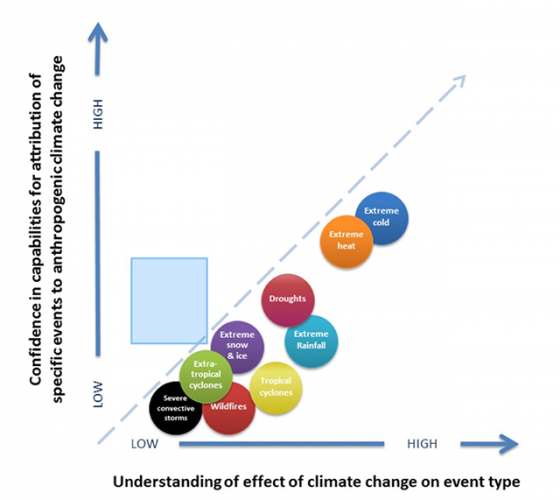 Courtesy of the National Academy of Sciences, Engineering and Medicine

How important are these new findings, and what practical implications do they hold?

Early reaction to the report has been highly complimentary, perhaps unusually so. Heidi Cullen, formerly of The Weather Channel and now chief scientist at Climate Central, likened it in a New York Times op-ed to the Surgeon General’s 1964 report on the attribution of lung cancer to cigarette smoking.

Climate change brings with it many existential threats — rising seas, acidifying oceans, species extinction. But the most immediate and costly threats result from the changing risks of extreme weather. Our perception of these risks has been almost entirely based on the past. That’s how insurance companies have assessed our premiums. But if weather risks change, and events that used to have a 1-in-500 chance of happening in any given year now have a 1-in-50 chance, insurance premiums will rise or insurance itself might become unavailable.

Here’s an example that underscores the predictive power of extreme event attribution: A recently published study in the journal Nature Climate Change analyzed record-breaking rains in Britain that flooded thousands of homes and businesses and caused more than $700 million in damage in the winter of 2013-14. Scientists found that such an event had become about 40 percent more likely. As a result, roughly 1,000 more properties are now at risk of flooding, with potential damage of about $40 million.

“The fog of uncertainty that obscured the human role in individual events is finally lifting,” said Princeton University professor Michael Oppenheimer. … Katharine Hayhoe, a Texas Tech climate scientist who wasn’t part of the study, praised the work: It is “very important to clarify to people how no event is black or white: No individual weather event can be said to be ‘solely’ human nor ‘solely’ natural any more. They are somewhere on the sliding scale between.”

The report, “Attribution of Extreme Weather Events in the Context of Climate Change,” can be read without charge here. It was created by the National Academy of Sciences Committee on Extreme Weather Events and Climate Change Attribution; the project was sponsored by the U.S. Department of Energy, the Heising-Simons Foundation, the Litterman Family Foundation, the David and Lucile Packard Foundation, NASA, the National Oceanic and Atmospheric Administration and the Arthur L. Day Fund of the National Academy of Sciences.