The prospects for saving the Boundary Waters from centuries of toxic mine drainage have grown considerably brighter this week with the disclosure of two documents concerning Twin Metals Minnesota’s efforts to dig copper- and nickel-bearing sulfide ores at the edge of this treasured wilderness.

Late Tuesday, the U.S. Department of Interior’s solicitor released a letter conveying its findings that Twin Metals has no automatic right to renew key mineral leases that were issued 50 years ago and lapsed at the end of 2013.

The letter, addressed to the Bureau of Land Management, advises that the BLM’s director has discretion to grant or deny the company’s renewal applications — which sets the stage for a review of mining impacts based on current science and environmental standards, not those in force when the leases were first issued in 1966.

A day earlier, Minnesota Gov. Mark Dayton released a letter he had written to Twin Metals to state his “grave concerns” about the inescapable risks of mining in the Boundary Waters watershed. The letter announced two important actions Dayton has taken to protect a place he describes as “a crown jewel in Minnesota and a national treasure”:

Dayton’s letter was dated Sunday and addressed to Twin Metals’ chief operating officer, Ian Duckworth. It makes plain that his opposition is not about any particular company or mining approach:

I am not questioning the qualifications of either Twin Metals or its parent company Antofagasta PLC. Rather my concern is for the inherent risks associated with any mining operation in close proximity to the BWCAW and my concern about the State of Minnesota’s actively promoting advancement of such operations by permitting access to state lands.

As you know the BWCAW is a crown jewel in Minnesota and a national treasure. It is the most visited wilderness in the eastern U.S., and a magnificently unique assemblage of forest and waterbodies, an extraordinary legacy of wilderness adventure, and the home to iconic species like moose and wolves. I have an obligation to ensure it is not diminished in any way. Its uniqueness and fragility require that we exercise special care when we evaluate significant land use changes in the area, and I am unwilling to take risks with that Minnesota environmental icon.

Since both the proposed mining and the threatened natural area are wholly within the state that Dayton governs, I think we can fairly assume that the governor’s position will receive considerable deference in Washington.

And if there’s anything more that Twin Metals’ various challengers could ask of Dayton at this juncture, well, I’m at a loss to think what it might be.

Because Twin Metals’ plans still receive only a fraction of the mainstream media coverage devoted to PolyMet Mining Corp.’s NorthMet project, which won a critical DNR endorsement last week, let us pause to consider a few points of comparison.

PolyMet has produced detailed plans in support of its proposal to mine the NorthMet deposit over a period of 20 years. Portions of the project, including an old taconite-processing plant that would be repurposed for precious metals, are in or near areas where iron mining and other industrial activity had previously taken place.

Undisturbed terrain would also be affected, and most if not all of the acidic, metals-laden water that escaped containment would flow toward Lake Superior; there has been discussion lately as to whether some might move north toward the BWCAW if certain unfortunate conditions occurred.

Twin Metals considers that it is about seven years behind PolyMet in the planning process, and while it has been conducting exploratory drilling and prepared a preliminary feasibility study, it has yet to put forward anything approaching a formal mine plan. Informally, it has discussed the concept of an underground mine on the scale of a small city beneath Birch Lake. 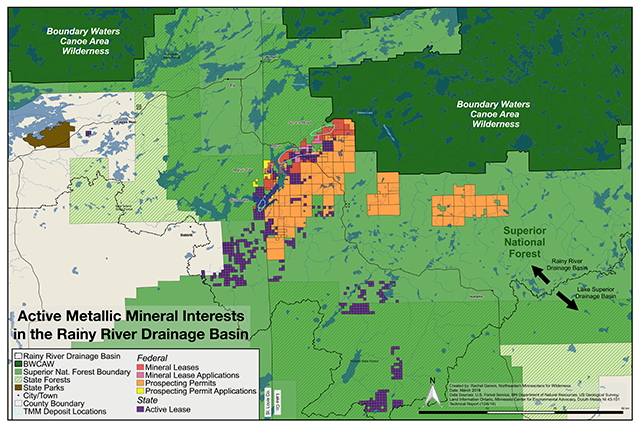 Courtesy of Northeastern Minnesotans for Wilderness
Areas highlighted in purple are state lands to which Dayton has denied access for exploratory drilling and other mining-related activity by Twin Metals Minnesota. (Click for larger version. [PNG, 7MB])

The Birch Lake deposit is one of four at the edge of the wilderness to which the company has rights, and it routinely speaks of inaugurating 100 years of precious-metals mining there. Sometimes it suggests that it might find a way to store waste rock from the Birch Lake operation on the same side of the Laurentian Divide as PolyMet’s disposal sites, but the mines themselves (and potentially much waste material) would be on the Boundary Waters side of the divide.

That means the natural flow of acid drainage from the Twin Metals operations would be toward the BWCAW, and then toward Voyageurs National Park and Ontario’s Quetico Provincial Park; together, these three public properties comprise 2.3 million acres of wilderness where scars of past extractive activity, never very numerous, have largely faded away.

That single fact has now galvanized a national Campaign to Save the Boundary Waters, led by Becky Rom of Ely and Northeastern Minnesotans for Wilderness.

Rom was joined on the call by a pollster reporting results of a statewide survey last month that found 67 percent of Minnesotans “oppose sulfide mining in areas near the Boundary Waters wilderness,” with only 15 percent in favor.

Also on the call were representatives of the National Wildlife Federation and, just to make clear that the breadth of the BWCAW’s appeal is broader than birders and solitude-seeking paddlers, a spokesman for Backcountry Hunters and Anglers of Missoula, Montana.

The latter, Land Tawney, noted that his organization’s last annual members’ photo contest gave top honors to an iconic image of a big whitetail buck harvested in the Boundary Waters on a perfect, snowy day in late autumn. (In a phone chat afterward, Tawney identified the winner as Jim Gerold of Prior Lake.)

After the conference I called Rom to follow up on a few topics. I wondered about the actual practical impact of Dayton’s decision to stop allowing access to state lands in the area, which are scattered across the region and constitute a fairly small area compared to the territory already covered by mineral leases present, pending or up for review.

I suppose that’s a logical question because the governor can only control access to state lands, but it’s hard to look at this in isolation. He is also saying there’s going to be a BLM decision that provides further guidance, and I think that will be announcement of an environmental assessment.

The BLM process is going to look at the whole array of science – ecosystem science, the science of sulfide mining, what happens when you put them together – and at the end of the day there will be a decision on whether this is an acceptable location or not.

So that assessment will be different than with PolyMet, because it is about location – not about a mine plan, because there is no mine plan. It’s about whether we should renew these leases for sulfide mining in this place. And in his letter, the governor has answered that question for himself.

I also asked Rom for her thoughts on Twin Metals’ standard assertion that the drilling activities for which Dayton is denying access to state lands are fairly unobtrusive operations, and essential to the company’s preparing an environmentally responsible mining plan.

The activities that they’ve been conducting in the national forest lands have been quite disruptive and harmful both to the lands themselves and to the [neighboring] wilderness. Preliminary drilling has been occurring within about a quarter-mile of the wilderness boundary in the Gabbro-Bald Eagle Lake area, which is managed as primitive.

They were drilling there well into July, in 2013 or 2014, and people who were camping in that part listened to what sounded like a jet engine 24 hours a day, nonstop, for two weeks. That’s a big intrusion on a wilderness experience. And that’s just a simple drill rig.

So imagine a very large industrial mining site at any of these deposits, and everything that goes with it. And I didn’t get to this on the call because you can only cover so much: there are 29 resorts, outfitters and campgrounds in this area. Hundreds of homes and cabins.

There will be tremendous economic and social disruption. This isn’t a mine in a desert in the middle of nowhere.