The 2016 annual report on the Isle Royale wolf/moose study, published Monday, won’t be the last from this legendary research project, Rolf Peterson was saying.

Three years of funding remains on the project’s major grant, and the focus can shift to impacts of wolf extinction: unchecked moose and beaver populations, reversal of the balsam fir’s recovery, and so on.

Of course, these are matters of which science already knows a lot. But look out if whitetail deer gain a hoofhold.

Peterson, a researcher and former director of the wolf/moose project going back to 1971, believes two wolves remain alive on the island, although neither was actually sighted during this year’s winter survey, which concluded prematurely on Feb. 25 because of “administrative constraints” applied by the National Park Service.

One survivor is male and one female, and they are thought to have produced a pup as recently as 2014, but the animals are 6 and 8 years old and unlikely to produce more new wolves, which in their circumstances is probably just as well.

Both are offspring of the same mother, and the inbreeding problems with half-siblings are worsened in their case because the male is also the father of the female. As Peterson likes to say, we don’t even have a word for that permutation of, I guess, incest.

Their last pup had such visible abnormalities, he told me by telephone from Michigan Technological University, that he could see the stunted tail and possible spinal deformity from his aircraft in the 2015 survey. That had never happened before.

The pup has vanished and is presumed dead. As for the parents, here is one of the sadder passages from the new report:

Tracks left by this ill-fated pair on Lake Eva in early February 2016 suggested mutual courtship (side-by-side cavorting). For the last two wolves, there are no options for other mates.

Curbs on this year’s research

The island’s moose herd has been swelling rapidly for several years as wolves were fading and is now conservatively estimated at about 1,300. Here, too, scientific observation was curtailed by limits on overflights, which took place for just 25 hours across eight days. 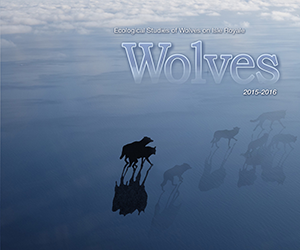 Peterson explained that the researchers charter their own aircraft for the survey, but the park service insists that backups be available for an emergency rescue. Typically the U.S. Forest Service covers that function but this year its planes weren’t available for standby.

Then there was the unusually warm weather driven by El Niño. Survey planes use the ice covering Washington Harbor for their landing strip, but this year “the ice got blown out not just once but twice. Another thing that’s never happened before.”

The likely underestimate puts the island’s moose population, which had generally been declining for two decades thanks to wolves numbering between two and four dozen, on pace to double in the next three to five years. From the report (references omitted):

Of the moose that we observed on the census plots in 2016, 22% (of 139) were calves.  This rate of recruitment is the second-highest ever recorded.  Recruitment rate is a useful predictor of moose population growth rate.

This winter we observed ﬁve sets of twins, four of which were on plots during the moose census. The increase in twins, consistent with an increasing trend in recent years, is the result of moose being well nourished and exposed to negligible rates of predation. Moose are well nourished because forage is abundant and predation rate is low because wolves are rare.

The forage here is principally the island’s struggling balsam fir forest, of concern to ecologists going back to Aldo Leopold in the 1940s, which in Peterson’s view is now teetering on the edge of either a historic recovery or another long collapse.

After a century of “hammering” by moose, which arrived on the island in the early 1900s, certain stands of fir are once again approaching heights that put them beyond destruction by browsing moose.

“But they need another five to 10 years of relief from moose to get there,” he said.

The “genetic depression” afflicting the island’s wolves has been a topic of scientific and policy discussions for a long time, but especially during the last six years of plummeting numbers that have reduced their numbers by 92 percent.

It is commonly, but mistakenly, thought that a higher proportion of deleterious genes has built up in the wolf population over time, but there is no evidence that this is the case. Where genetic rescue has occurred, either naturally (as with Isle Royale wolves in 1967, 1997, and perhaps other times) or by management (e.g., Florida panther rescued by translocation of females from Texas in 1995), dominant normal genes mask the actions of deleterious recessive genes.

This explains why congenital problems caused by inbreeding can disappear within one generation of a genetic “rescue.”

Such rescue is as simple from a practical standpoint – though fraught within the policy frame of hands-off wilderness management – as bringing in some new wolves and their DNA.

But with just two indigenous wolves remaining, aged and genetically substandard, a rescue undertaken now is unlikely to help. So the National Park Service is considering whether to let wolves disappear for good or reintroduce them a few years hence.

The planning timetable contemplates a final decision being reached late next year, and in an interview with Minnesota Public Radio on Tuesday the park’s superintendent, Phyllis Green, said she’s concerned about the genetic “bottlenecks”  that might burden future wolves in an ecosystem as isolated as Isle Royale’s.

The new report  offers a close-up of genetic depression in the example of “Pip,” a wolf whose radio collar started sending mortality signals just as the 2015 winter survey was ending; the body was recovered from a beaver pond last spring.

Pip apparently had survived for weeks after being attacked by other wolves and suffering injuries that proved mortal, but this was just the last chapter in a difficult life:

Pip exhibited a range of pathologies that were surprisingly numerous for a wolf of middle age (six years old), the legacy of subordinate status and subsisting on large prey that are difficult to kill.

Serious infections in his skull developed after at least two severe traumas. One resulted in the fracture of several teeth, including the lower left canine. This could have been caused by a kick from a moose.

The second event involved biting a large bone positioned obliquely in the mouth (as from a struggling moose) —  this broke off the crowns of two lower teeth.  These traumas left a legacy of pain —  ﬁrst, from the original tooth fractures, and later from denuded roots that became infected, creating large abscesses.  Bacterial infections of teeth and surrounding tissues create fever, pain, and septicemia with possible bacterial colonization of kidneys and heart valves.

Pip also had osteoarthritis in several vertebrae, and healed fractures in many ribs and vertebral processes. And he exhibited an extra lumbar vertebra, not unlike many wolves from Isle Royale examined over the past two decades, plus two unique structures in the ribcage that appear to have been anomalous ribs.

So I asked Peterson how that bottleneck problem could be anticipated and managed, and he said there are really just three choices.

You could maintain statistics on the inbreeding level as the population develops, and have a threshold of inbreeding coefficients – a red-flag number that you say, OK, if it gets over this, we’ll add more wolves.

Actually, the Swedes have a number, 0.25; they don’t want inbreeding to get higher than that. And 0.25 is pretty high – that’s brother-sister mating. [The coefficient for Isle Royale’s last name pair is 0.43].

Or you could say, we’re going to simulate what ice bridges used to be, and every so often release another new wolf or two.

Or you can sit back and wait for something like what we’ve seen lately, genetic collapse and reproductive failure.

Watch out for swimming deer

And what about a whitetail invasion? It’s almost inevitable, Peterson said, given changing climate and a mainland ecology in which moose have faded and deer numbers are exploding.

The deer wash in, dead, to the island – of hypothermia, or drowning – and we keep track of the ones we recover. The numbers have been going up for three decades, and it’s not uncommon now, maybe six in the previous decade.

The surface temperature of Lake Superior has hit 70 degrees in late August at least twice in the last several years, and a long-distance human swimmer can handle 70 degrees – without any fur. So deer could swim across right now, at least occasionally.

Imagine what it could mean if deer became established, starting with all the potential parasites they carry, including brainworm.

How would we ever know if there were live deer on Isle Royale? It might take years for humans to figure out. And you wouldn’t believe the first reports, because people are always reporting unbelievable stuff.

But a wolf would figure it out. Instantly.

The full annual report, with further details of the 2016 winter survey, can be read or downloaded here [PDF].