Futuristic urban farming makes for fun feature stories – I particularly enjoy Belinda Jensen’s “Grow with KARE” pieces – but can they make much difference in the world?

Yes, according to a research review published Thursday by the Center for a Livable Future at Johns Hopkins University. But not in the ways you might think.

“Vacant Lots to Vibrant Plots/A Review of the Benefits and Limitations of Urban Agriculture” assesses the findings of 167 studies worldwide that looked at a wide range of food-production techniques from about every perspective you might imagine: economic to environmental, horticultural to multicultural.

Among the positives for “urban farming” (in shorthand):

These benefits notwithstanding, the notion that our industrialized food systems can be changed much by urban farming is probably fanciful, at least at scales seen so far:

Because the Hopkins center is devoted to pursuing a sustainable, healthy alternative to currently prevailing food systems, its bedrock conclusion that “the benefits of urban agriculture may be overstated” could be taken as an admission against interest.

It’s an important and credible conclusion, though, as is the observation of its lead author, Raychel Santo, that “while urban agriculture alone will not solve the many dilemmas of our food system, it can be part of a constellation of interventions needed to transform the food system into one that is more socially just, ecologically sound, and economically viable.”

Let’s take a closer look at some of the report’s key points:

Although journalists are drawn like bees to blossoms when somebody launches a new venture in in rooftop greenhousing, basement aquaculture,  or conversion of industrial buildings to multifloor  “vertical farms” enclosed by “edible walls,” the oldfangled community garden remains, formwise, the dominant source of urban produce.

In other words, urban agriculture is still scaled far more to the garden than the farm, even the small farm, and this is unlikely to change in the near future.

While the Worldwatch Institute estimated five years ago that up to 20 percent of the world’s food is “grown in urban areas’ – according to a piece at civileats.com, which is the sole coverage I’ve seen of the Hopkins paper – it’s unclear how U.S. production compares to that number, or what it would take to grow to that level.

To get an idea of the complexity at work in predicting capacity factors, consider these three citations: 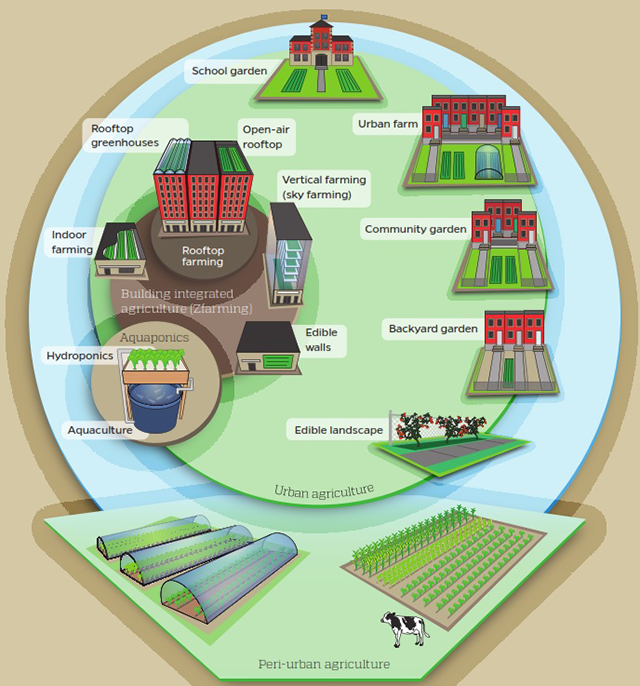 Center for a Livable Future/Johns Hopkins University
A variety of futuristic methods are under discussion for urban food production, but it’s the old-style community garden that’s responsible for most of the current yield.

Bright spots in the ‘burbs

At the moment, the opportunities we might characterize as low-hanging fruit for urban agriculturists lie not in, say, inner-city aquaponics projects (where fish and vegetables are raised simultaneously in indoor tanks under artificial lights) but in what the report calls “peri-urban farming.”

The definition here is a little murky – we’re talking about land in the transition buffer between urban and rural land – but the production potential has been demonstrated in a series of studies finding that an awful lot of food can be grown in only a little space, using largely traditional dirt-farming methods.

The aforementioned report on New York found that if all the peri-urban agricultural land in the metropolitan region surrounding the city were dedicated to food production, it could support between 58-89 percent of the region’s fruit and vegetable needs (excluding warm-weather fruits).

Smaller-scale growing reduces the need for fossil-fuel inputs, but its inherent fragmentation also lowers efficiency in the use of water, fertilizer and other inputs. Still, it seems to yield some public health benefits to participants, especially older people for whom it becomes a principal physical activity.

There is little evidence that distributed agriculture, as we might term it, is adding significantly to food security or, for that matter, economic security.

A study in San Jose, California, found that participants in a gardening program for low-income people saved at least $240 a year per household on groceries, with some saving three times that much.

But farm labor remains “one of the most exploitative of lowest-paying industries in the U.S. today,” and this is unlikely to change in an urban farming sector where an average hydroponic operation posts $5,000 a year in sales and only one-third of urban farmers report that they earn some kind of living from their efforts.

On the other hand, the report finds a range of social benefits that seem to settle over people when they work together to grow stuff, especially when they are otherwise disadvantaged.

Neighborhood cleanliness and cohesion improve; workplace skills are learned; transitions back from prison life are eased; young people get practical education in science, healthy eating and delayed gratification; community groups become more adept at pressing their governments to deliver what they need.

Which goes to show, I guess, that your humble community garden can grow hope and civility alongside the tomatoes and chard.

The full report can be read or downloaded here without charge.