Tuesday’s map of fire risk across Minnesota certainly was striking, with every last county rated at high risk for wildfire by the Department of Natural Resources – and about one-third of the state in the extreme category.

That’s the map to the left, above; a day later, as the one to the right illustrates, the situation had improved a bit, for a while. But two-thirds of the state was still facing high or very high fire danger, a situation the DNR considers likely to persist for another week at least (you can keep current here).

Spring is the principal wildfire season in Minnesota, as people start burn piles without considering that the ground is still carpeted with winter’s dead vegetation and dry debris. A string of rainy days like we saw in late April isn’t sufficient to reverse the situation.

“In Minnesota, 98 percent of wildfires are caused by people, and most happen in spring,” the agency advises, and “of every five wildfires, one starts from a burning brush pile.”

Linda Gormanson, who supervises wildfire prevention efforts for the DNR, told me it has been a busy spring so far, with 866 fires burning 6,565 acres through Tuesday; the annual averages are  1,200 wildfires and 38,000 acres burned.

Much of the rest of the country wishes it were so lucky.

Summer is prime wildfire season for most of the U.S., and on Sunday the National Interagency Fire Center (NIFC) in Boise, Idaho, issued its first outlook of what the country can expect from now through August.

The good news is that the NIFC expects this year to be less challenging than last. Which would be better news if 2015 hadn’t been a record-breaker. 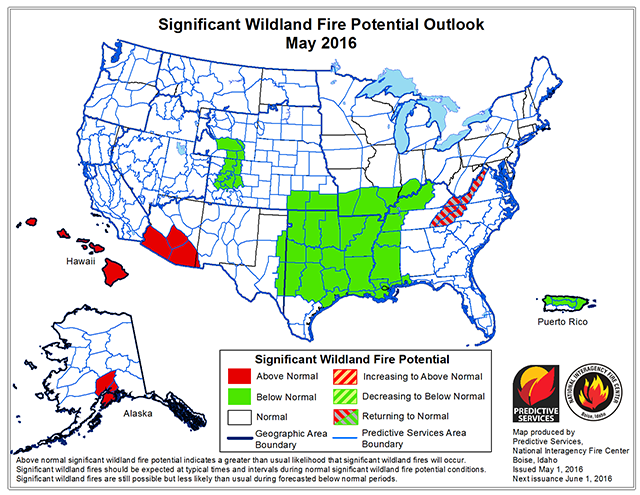 Some 10.1 million acres burned, the most for any year with record-keeping. The U.S. Forest Service spent $1.72 billion fighting fires, as usual going over its budget. Also as usual, the service robbed other programs – like fire prevention – to cover the tab because President Obama’s reasonable proposal to divert natural-disaster funds to the most catastrophic fires can’t gain traction in Congress.

Oh – and 13 firefighters were killed in the line of duty last year, according to the NIFC. At least five civilians were killed by wildfire, too, in California. Some 4,500 homes were lost.

At the moment, California is catching a break from El Niño, with enhanced winter precipitation easing drought conditions and building more snowpack. That’s likely to delay the forest fire season somewhat, and possibly to diminish the intensity of some higher-altitude fires when they do burn, but it will be a different story in grasslands and brushy terrain, not only in California but across Nevada, Arizona and New Mexico.

There is an above normal crop of annual grasses and other perennial vegetation at lower elevations. These fine fuels are beginning to cure in some of the drier areas in the southern end of the Sacramento Valley and surrounding foothills and in the eastern Bay Area.

Valleys and foothills east of the Cascade-Sierra crest are expected to have an above normal fine fuel crop as well, and these fine fuels will cure out in July. Significant fire potential will begin to move to above normal there in July, and remain above normal in August.

These effects are already being felt in Arizona; the nearly 300 wildfires recorded there in the first three months of the year were nearly double the count for the first quarter of 2015. And some of them were big, as the Arizona Republic pointed out:

Already this year, a wildfire driven by gusty winds erupted in western Arizona, with flames so intense that they jumped the Colorado River into California. The fire scorched more than 2,200 acres and caused the evacuation of a resort and two nearby mobile-home parks.

Current conditions, with high fuel levels and exceptionally dry and high temperatures, eerily resemble those of the catastrophic 2002 and 2011 fire seasons, according to the Department of Forestry and Fire Management.

This year is likely to continue the climate-driven shift of big battlegrounds northward to Alaska, which alone accounted half the wildfire acreage of 2015, the NIFC outlook says.

Only two areas of abnormally dry conditions exist across Alaska: one in the eastern Interior along the upper Tanana Valley and the other in the central North Slope extending into the central Brooks Range. The rest of the state is considered normal. The snowpack is rapidly melting.

Below normal snowpack was observed across most of the Anchorage Bowl and Kenai Peninsula, where much of the winter precipitation fell as rain, particularly at low elevations. This will likely lead to very dry fine fuels as the remainder of the snowpack disappears. …

The southern half of the state is snow-free and the snow-free areas are expanding northward rapidly. Alaska is quickly coming into fire season. As areas become snow-free and dry out human-caused ignitions are possible along the populated corridors. Expect fire season to start about one to two weeks early.

However, the striking patterns of fire last year in generally wet areas of western Washington and Oregon are likely to return to normal. And while recent months have seen notably large fires in places like North Carolina, New Jersey and Kansas, those regions are also expected to have normal levels of fire activity through the year.

It should go without saying by now that these patterns of worsening fire regimes are driven by climate shifts associated with global warming. Also, the cost and danger of fighting the flames is magnified by continuing development at the forest’s edge. The Forest Service chief, Tom Tidwell, made both points in comments to the Associated Press:

He said climate change is making wildfires worse, heating up the air, drying out forests and extending the wildfire season by an average of 78 days since 1998. A growing number of homes at the forest’s edge, which firefighters call the wildland-urban interface, also drives up costs by forcing managers to concentrate crews and equipment to protect communities, he said.

Tidwell said state and federal agencies need to thin those forests to a more natural state to prevent fires and make them easier to fight. Researchers say decades of over-aggressive firefighting have left forests dense with living and dead trees and more prone to deadly mega-fires.

But it’s hard to do much on the prevention side when all your budget and more is eaten up by fighting the flames; the five worst U.S. forest years in terms of acreage burned have all occurred in the past decade, and last year’s outlay was almost eight times the levels typical in the 1980s.

Which is something to think about as we watch the unfolding horror of Fort McMurray.

Like Alaska, Alberta had an unusually severe wildfire year in 2015, a consequence of deepening drought. Then comes a week of springtime heat waves and high winds, and suddenly at midafternoon Tuesday a city of 88,000 people must be entirely evacuated as whole neighborhoods burn, gas stations explode and flames march to the city center. 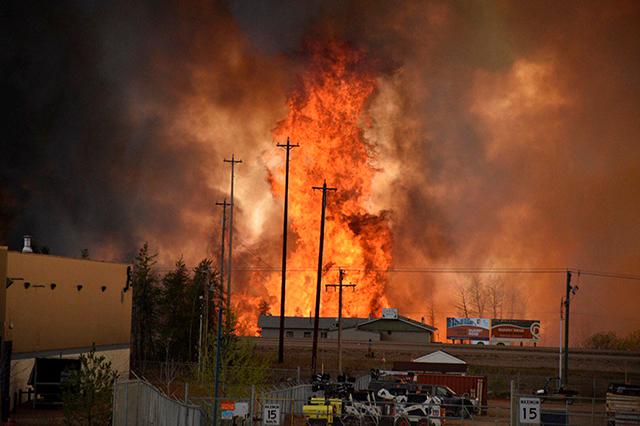 REUTERS
A city of 88,000 people must be entirely evacuated as whole neighborhoods burn, gas stations explode and flames march to the city center.

Considering there was only one highway out of town, it must be considered fortunate that all of the fleeing residents have escaped with their lives so far, as ashes and embers rained from the sky and LP tanks went off like bombs.

As of this morning, the highway had been cut off by flames, more than 1,600 homes were gone, the evacuation zone was widening and oil companies were shutting down production in the tar-sands region for which Fort McMurray is a sort of capital city.

Here is a wildfire catastrophe on a scale we haven’t quite seen before in North America — and there is no pretending the conditions that created it  aren’t increasingly prevalent and perhaps irreversible.

U.S. wildfire outlook improves a bit, but the trend lines are discouraging