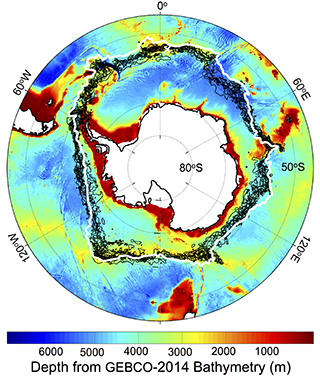 Courtesy of NASA/JPL-Caltech
White line shows the boundary within which wind and wave conditions are ideal for “ice factories” to build thick, durable sea ice surrounding the continent of Antarctica.

An interesting riddle about global warming goes like this:

If the warming is truly global, and the temperature trend lines are steadily upward, how come the sea ice in the southern polar region appears stable — even increasing — while in the north it is shrinking at alarming rates?

Many explanations have been suggested. Maybe it has something to do with the ozone hole over the Antarctic. Maybe meltwater running off the glaciers is chilling the southern seawater or making it less salty.

But none of these hypotheses has proved sufficient to explain what NASA’s Jet Propulsion Laboratory calls the “cryospheric conundrum” of why sea ice should behave differently at one end of the earth than the other.

Now a JPL scientist has published some findings that make it all fairly clear even to nonscientists.

The Antarctic, it seems, makes its sea ice in sheltered “factories,” protected from wind, waves and warm-water currents by barriers of older ice that allow new ice to grow thicker and persist longer, in conditions that appear  just about perfect for turning saltwater into icebergs.

It must be noted right off that this is in no way good news regarding the pace of warming in the southern ocean, which continues to warm just like the rest of the world’s seawater. (Nor can the findings lend any comfort to any deniers still in the house, who stubbornly insist that climate scientists don’t know their ice from their elbows.)

Not about ice sheets

And the new discoveries don’t actually have much to do with the fate of Antarctica’s terrestrial and coastal ice sheets, which continue to decline in places while actually increasing in others, or with forecasts on sea-level rise, because ice formed afloat has only minimal impact on that scary scenario.

But the paper by Son Nghiem and collaborators, published last week in the journal Remote Sensing of Environment, offers an interesting look at the processes of sea ice formation at the ends of the earth – and at new ways of studying them. It is one cool piece of work.

Let’s start with one big difference between the Arctic and Antarctic in the way they make and retain sea ice.

In the Arctic, which lacks a large land mass at its center, significant ice cover is not only a year-round but year-to-year thing. Its extent grows in winter and shrinks in summer, and climate-minded scientists are concerned with long-term changes in the annual maximum, which has been generally shrinking for the last three decades.

In the Antarctic, less than 20 percent of the ice lasts from one season to the next; the rest is made fresh each year in the seas surrounding the huge continent at the polar region’s center. But the rates of formation have been changing somewhat since the 1970s, and the ice volumes actually grew by notable amounts from 2012, 2013 and 2014 before subsiding to a more normal pace last year. For all of these reasons and more it is harder to measure pack ice at the earth’s southern end and so, in the words of the paper, “a reliable estimate of the Antarctic snow and sea ice thickness is still elusive.”

For this research, the main measurement tool was satellite-based “scatterometry,” a way measuring returning radar waves for the “backscatter” effect of reflection from roughened surfaces.

Smooth water, for example, has less backscatter than choppy water, and this allows for sophisticated measurement of surface winds. Same for water that has stiffened into ice. Same, actually, for ice that has grown older and thicker compared to young ice.

Nghiem’s team decided to gather and analyze data on sea ice extent (SIE) from 1999 to 2009, with special attention  to 2008, “as it was one of the years of exceptional seasonal variability in Antarctic sea ice coverage, which was characterized by three distinctive phases of SIE anomalies and substantial regional variations.”

In other words, whatever’s been happening in the Antarctic was happening a lot in the growth season of 2008 which, because of the latitude, runs from June to September.

These data were analyzed in light of sea surface temperatures as well as the contours of the Antarctic continental surface (altitudes) and surrounding ocean floor (depths). The findings, as described in JPL’s announcement of the paper:

Their analyses revealed that as sea ice forms and builds up early in the sea ice growth season, it gets pushed offshore and northward by winds, forming a protective shield of older, thicker ice that circulates around the continent. The persistent winds, which flow downslope off the continent and are shaped by Antarctica’s topography, pile ice up against the massive ice shield, enhancing its thickness.

This band of ice, which varies in width from roughly 62 to 620 miles, encapsulates and protects younger, thinner ice in the ice pack behind it from being reduced by winds and waves. …

As the sea ice cover expands and ice drifts away from the continent, areas of open water form behind it on the sea surface, creating “ice factories” conducive to rapid sea ice growth.

As it happens, the line formed by the ice shield corresponds closely with a boundary formed by ocean currents, known as the Antarctic Circumpolar Current Front and marking a divide between waters that are significantly cooler to one side, warmer to the other. Coincidence?

When they plotted the bathymetric [ocean depth] data against the ocean temperatures, the pieces fit together like a jigsaw puzzle. Pronounced seafloor features strongly guide the ocean current and correspond closely with observed regional Antarctic sea ice patterns.

For example, the current stays near Bouvet Island, located 1,000 miles from the nearest land, where three tectonic plates join to form seafloor ridges…. Off the West Antarctica coast, the deep, smooth seafloor loses its grip over the current, allowing sea ice extent to decrease and resulting in large year-to-year variations.

The paper, “Geophysical constraints on the Antarctic sea ice cover,” can be found here but access isn’t free.  More photos, maps and a video of ice formation are at JPL’s page here.

Why is Antarctic sea ice on the rise? (Alas, not because of climate stability)