In a new study that would seem to complicate the problem of saving honeybees and other pollinators, Indiana researchers have found that bees get only a minor part of their big pesticide burden from crop treatments — even in landscapes dominated, like Minnesota’s, by corn and soybean fields.

Although neonicotinoid insecticides have received the most attention as a driver of beekeepers’ colony losses, it has long been known that honeybees examined post mortem are carrying a host of other pesticides.

But less is known about these compounds’ potential contributions to large-scale honeybee die-offs of recent years, and less still about where the all the stuff is coming from.

So Purdue University entomologist Christian Krupke and postdoctoral researcher Elizabeth Long, now teaching at Ohio State, decided to investigate where and when the bees are gathering poison along with pollen.

From the university’s announcement of their research, published Monday in the journal Nature:

The samples showed that honeybees collect the overwhelming majority of their pollen from uncultivated plants, particularly the plant family that includes clover and alfalfa.

The similarity in pesticide content across all three landscape types was a big surprise, but bigger still was the conclusion that honeybees gathered only a minor portion of their pollen from crops, in this case corn and soybeans.

Garden use and spray drift

The rest came from residential lawns and gardens, parks, golf courses and other foraging areas that had been treated with pesticides, either purposefully or by accidental drift.

“The sheer numbers of pesticides we found in pollen samples were astonishing,” Krupke said. “Agricultural chemicals are only part of the problem. Homeowners and urban landscapes are big contributors, even when hives are directly adjacent to crop fields.”

Not all of the pesticides were manufactured as insect killers — in fact, fungicides and herbicides were the most common poisons found in the pollen.

However, from what little is known about the interactions of multiple pesticides consumed together, Krupke said it is clear that at least some fungicides considered harmless to insects can increase the toxicity of insecticides and create other vulnerabilities.

From the paper (footnotes omitted):

[F]ungicides found in our study, such as azoxystrobin, may contribute to the increased susceptibility of honey bees to infection by the gut pathogen Nosema ceranae and organophosphorus miticides such as coumaphos can interact with the neonicotinoid imidacloprid to affect odor learning in honeybees.

Among the insecticides found in the honeybees’ pollen, the largest grouping was pyrethroids — repellent compounds used to reduce the annoyance of such insects as mosquitoes and wasps — followed by neonicotinoids. 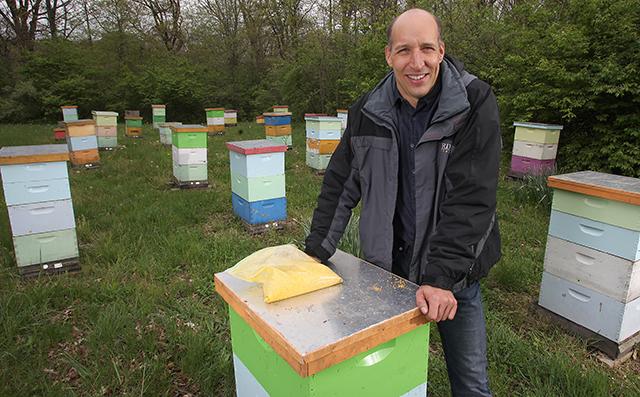 The high proportion of neonics was expected as they have become the predominant insecticide used in U.S. crops. But the pyrethroids loads were a surprise, and the time pattern of exposures — spikes in August and September, when mosquito-control efforts are at maximum — offered strong evidence of where it is coming from.

An even bigger surprise was the discovery of which plants were providing the tainted food. From the paper:

Analysis of forager-collected pollen revealed that in all cases honeybees foraged primarily on non-cultivated plants…. Honeybees visited a diverse assemblage of flowering plants, collecting pollen from up to 30 plant families during the 16-week sampling period. Regardless of the location of honeybee colonies, pollen loads were dominated by the Fabaceae, a plant family that includes both wild and cultivated species such as clovers, alfalfa and soybeans.

But perhaps the most discouraging implication of the study concerns the strategy of offsetting pesticide exposure from agriculture by simply expanding natural foraging grounds — even if pollinator-minded homeowners continue the recent trend toward bee-friendly reductions in pesticide use.

[T]he ubiquity of pesticide exposure in pollen throughout the season casts doubt on the viability of bee-friendly habitats adjacent to crop fields and instead suggests these habitats could act as putative ‘trap crops’ acquiring multiple pesticides in the form of dust or spray drift, which may settle on and contaminate blooming flowers or, in the case of systemic chemicals, contaminate water with active ingredients that are subsequently taken up by plants and expressed in pollen.

This is of particular concern in light of recent work demonstrating that honeybees and bumblebees show no aversion to neonicotinoids presented in food, and furthermore that these insecticides can impair honeybee immune responses to pathogens. …

Finally, it is critical to point out that although we used honeybees as pollen collectors in this experiment, it is likely to be that a wider range of pollen-feeding animals, including many wild bees and other non-target invertebrates, are also exposed to the same suite of pesticides as they forage in and near agricultural fields.

The full paper, “Non-cultivated plants present a season-long route of pesticide exposure for honeybees,” can be read and downloaded here without charge.

Honeybees get most of their pesticide load from nonfarm plants, study finds