In the right backlight, even a fat plume of coal smoke drifting into a Great Lakes twilight can be a thing of beauty.

Of course, it helps if you are standing in light breezes, with a clear environmental conscience, on the deck of a boat you’ve come to love. All the better if you and she are back together after a lover’s quarrel.

This was the situation as I circled the S.S. Badger’s decks the other evening, and so surprising was the sight that I almost forgot to snap the documentary image above. I was caught up in wondering how J.M.W. Turner might handle the golden smog had he lived another 155 years and brought to this funky old ferry the same touch he demonstrated in painting, say, “The Fighting Temeraire tugged to her last berth to be broken up.”

Right about then the ship’s horn sounded and I strolled aft to watch as the landside crew in Ludington, Michigan, slipped the Badger’s mooring lines and let the vessel go.

Without a tremor the old boat moved smartly away from her berth and toward the breakwater’s opening into Lake Michigan. Her virtual twin, the S.S. Spartan, shrank rapidly in size as the Badger built speed toward an eventual cruising pace of about 15 knots.

The Spartan has not left her berth since Jimmy Carter was president, but at least she hasn’t been tugged away to be broken up, a fate that has narrowed the nation’s fleet of coal-fired carferries to just one — and seemed to be descending on the Badger as well during several years of her owners’ truculent indifference to federal water-pollution law.

Soon it was quite breezy, and cooling quickly in the fading light, and the captain was announcing from the bridge that by the middle of our four-hour crossing to Manitowoc, Wisconsin, the winds would approach 25 knots, with waves building to three feet.

Sallie and I left our deck chaises at the bow in favor of plastic patio chairs along the starboard rail, sheltered a bit from the wind by lifeboats and the davits holding them overhead.

We sipped a cocktail as the start of sunset brought a flock of camera-wielding travelers to the rail, and no wonder. Turner himself might’ve been gobsmacked by this: 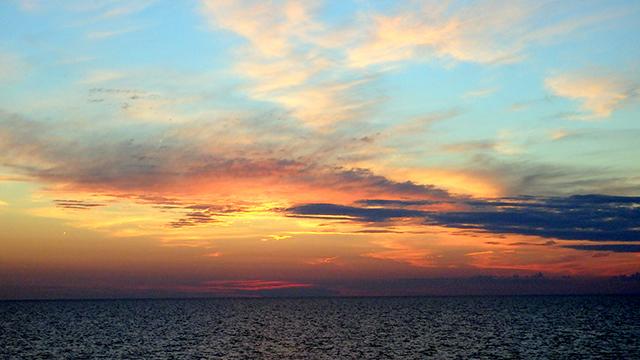 Among the dazzled passengers were a 40-ish couple from the outskirts of Green Bay, making their second trip on the Badger. Their first had been earlier in the day.

“We just had time to get an ice-cream cone in Michigan before reporting for the return trip,” he said.

“We’ve been talking about doing this for years!”  she added, from behind a camera pointing into the sun. “Who knew it would be so beautiful?”

Both were grinning with as much excitement as any of the children streaming back and forth on the deck, and it brought back that first-timer feeling I had all but forgotten.

My reasons for trying out the Badger were as practical as those of any shipper sending tractor-trailer rigs (or, earlier, railroad cars) across the lake instead of around it. I wanted a break in the long drive between the Twin Cities and western New York, and I wanted especially to skip over the Chicago freeways.

I didn’t expect to be able to roll out a sleeping bag on a deck chaise and sleep under the stars, or to experience a ride so glassy smooth in most any weather (the Badger takes 3-foot rollers so thoroughly in its stride that you probably won’t feel them in yours) or to sleep like a rock whether in a deck chaise, lounge armchair or skinny bunk in  a so-called “stateroom” (save your money on that option).

Didn’t expect to fall in love, either — or to move so quickly to heartbreak.

Now that the Badger’s operators have brought the boat into accord with laws against dumping its mercury- and metals-laden coal ash directly into Lake Michigan, at a rate of 4 tons per day, the details of their battle with the U.S. Environmental Protection Agency no longer matter.

What may still matter to some — and mattered enough to me to break off the relationship for a time — was Lake Michigan Carferry’s disingenuous campaign of resistance against clean-water standards that had been applied to all kinds of coal-fired polluters in the Great Lakes basin.

EPA’s enforcement pace was relaxed, if not reluctant, yet LMC still elected to take advantage of various extensions by pretending to research a conversion to natural gas, while playing games with lab tests and enlisting supportive Congress members to try writing a special exemption into federal law. 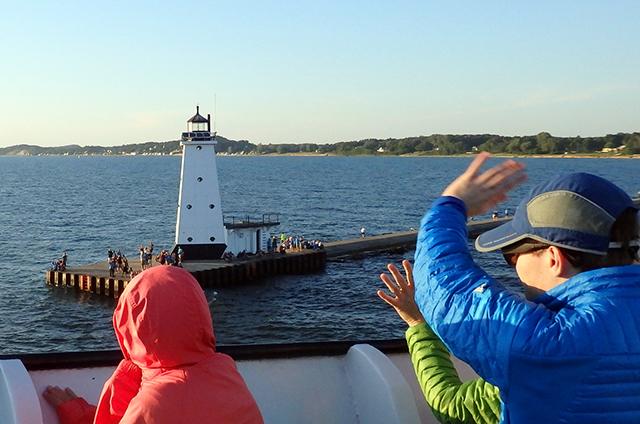 MinnPost photo by Ron Meador
The lighthouse at Ludington.

All the while, LMC insisted it was impossible to adopt the simplest solution of all: keep the ash aboard for offloading at the dock.

Once EPA made clear there would be no further extensions, LMC swiftly installed an ash-handling system that holds the waste aboard then offloads it in Ludington, where it is sold for use in making concrete.

No impact on service or revenue

The changes cost $2.4 million — a tiny fraction of what, say, a diesel conversion would have required — and were completed in the offseason between the 2014 and 2015 operating schedules, so not a single day’s fares were lost. The timetable is also unchanged: two four-hour round trips per day, with an hour’s pause at each docking to allow for coal loading in Manitowoc and ash removal in Ludington.

Earlier this year, the Badger won listing as a National Historic Landmark — for legitimate reasons, not as a Clean Water Act dodge — and earlier this month LMC rolled out a new promotional/historical film touting the vessel’s advanced coal-burning technology that reduces both fuel consumption and air emissions, all to protect the environment.

Those changes, too, were required by the terms of LMC’s surrender to the EPA, and as we watched the film during our crossing I listened closely for even the slightest reference to EPA, the settlement or the long legal fight. There wasn’t one, which I suppose is to be expected and actually is just fine by me.

Because I’ve really loved this boat. True, I’ve also needed its services; there’s another ferry across the lake, and I like it fine, but for various reasons it’s not the best option on our annual trip east and back.

Against what seemed for years to be very long odds, the Badger is legal for a change and as much fun as ever. Also, it seemed to us, a little less smelly than before, which may be another benefit of the improvements below decks.

When a polluter cleans up its act, I feel some forgiveness may be warranted. Thanks to a couple of fine crossings this summer, it hasn’t been hard to consign LMC’s sorry history to the past — or to fall in love with the Badger as if for the first time.