If you think it impossible for Americans to become more politically polarized over climate change, here’s some bad news from a fresh analysis of Gallup polling on the topic:

These are the key conclusions of a striking paper, lightly covered so far in mainstream media, that appeared at the end of August in the journal Environment: Science and Policy for Sustainable Development (it caught my attention yesterday via David Roberts’ fine piece over at Vox).

Trends in Americans’ view of climate issues is a topic Dunlap and McCright have been tracking for some time, and they published a similar analysis a couple of months before the 2008 presidential election — a point that in retrospect, at least, seemed full of promise:

Al  Gore’s movie “An  Inconvenient Truth,” released in 2006 and published in book  form the following year, received considerable attention, and its message was buttressed by the Intergovernmental Panel on Climate Change’s (IPCC) 2007 Fourth Assessment Report proclaiming that the evidence for global warming was “unequivocal” and that it is “very likely” due to human activities. The impact of both was heightened in 2007 when “An Inconvenient Truth” won the  Academy Award for Best Documentary Film, and Gore and the IPCC  shared the Nobel Peace Prize. By the following year public concern about global  warming rose to levels not seen since the late 1990s — prior to 9/11 and the Bush Administration’s “war on terror.”

Political scientists Deborah Lynn Guber and Christopher J. Bosso capture the situation when stating, “The year 2007 — with its unlikely fusion of science, politics and old-fashioned Hollywood glamour — had seemed to mark a long-awaited tipping point for climate change,” a window of opportunity reinforced by growing corporate acceptance of the necessity of limiting greenhouse gas emissions and a multitude of climate action plans passed at the regional, state, and local levels. … And yet, two short years later, the pendulum had swung back with stunning speed and brutal force.”

To the standard explanations of how this happened — the massive and industry-bankrolled denial campaigns, the Obama administration’s initially go-slow approach, ineffectual efforts from environmental advocacy groups, the recession — Dunlap and McCright add the politically colored polarization of Americans’ attitudes on climate change and, not incidentally, a wide range of other environmental concerns.

One place this shows up, of course, is in the national legislature:

What was once a modest tendency for Congressional Republicans to be less pro-environmental than their Democratic counterparts has become a chasm — with Republicans taking near-unanimous anti-environmental stances on relevant legislation in recent years especially 2015. 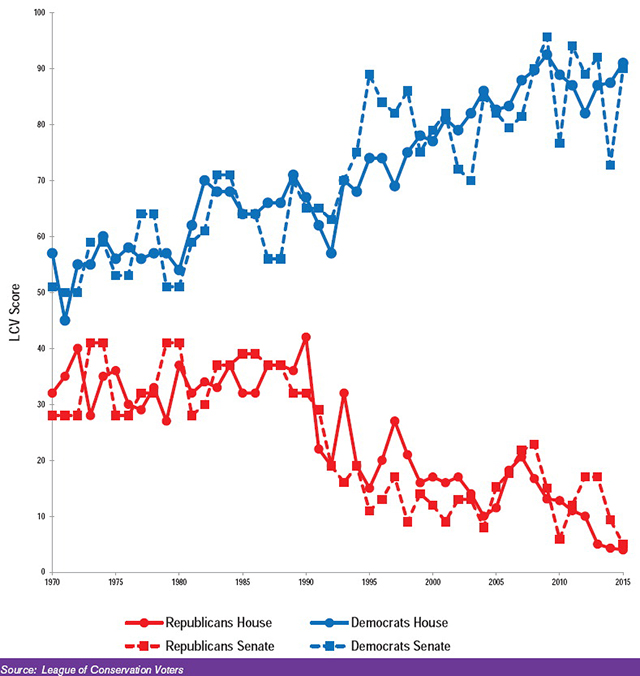 Ratings by the League of Conservation Voters of Democrats and Republicans in Congress have diverged dramatically in recent years.

Another is public opinion, which drives the congressional posturing and also is driven by it. And there may be no better long-term measure of those trends than Gallup’s annual survey of Americans’ environmental attitudes — including six questions on climate change that have been asked since 1997. (Although, as noted here from time to time, other polls offer interesting contrasts and amplifications.)

Responses to Gallup’s question about whether people think global warming is occurring have also diverged along partisan lines.

On all of these measures but one — arguably the least significant of the set, concerned with whether warming’s effects are already being felt — the gaps between Democrats and Republicans have widened since 2008, and they were pretty big to begin with.

In short, the results indicate that the substantial partisan polarization that had rapidly built up in the first eight years of the new millennium has not abated, but has actually grown since 2008.

That “Republican increase in belief” is good news, I guess, and in fairness I also want to note that Gallup has measured in the last year or two some very slight upticks in acceptance of global warming realities by all partisans — Republicans, Democrats and independents (for detailed breakdowns and charts, you can read the whole paper here without charge).

But this should not be taken as proof that facts, or personal experience, or even receptivity to reshaping energy systems for non-climate reasons, have begun to matter more. Key excerpts from the paper:

It has long been hoped that more factual information about human-caused climate change will increase public belief in its reality. However, two decades of news coverage and educational campaigns since 1997 have produced only modest increases in Americans’ belief in the reality and human cause of climate change, with gains among Democrats often offset by declines among Republicans.

Some observers find optimism in recent polls showing that large pluralities and sometimes even small majorities of Republican voters (compared to sizable majorities of Democrats) express support for energy policies and other measures that would be helpful in reducing greenhouse gas emissions. However, as Lilliana Mason and other political analysts note, individuals can hold relatively moderate positions on many issues and yet be strong partisans committed to keeping the other party out of office.

Thus, as long as rank-and-file Republicans vote for conservative candidates, and those candidates remain steadfast in opposition to climate change action, the former’s receptivity to climate-friendly policies remains almost irrelevant — for the Congress they help elect will be highly unlikely to give such policies any consideration.

Americans’ polarization over climate is widening, and the facts don’t matter