Building on a striking success of four years ago, Friends of the Mississippi River and the National Park Service have updated their portrait of the metro Mississippi as a stream struggling against long odds to get healthy, and making some significant gains.

The result once again is not a dry, white-paper treatment but an engagingly written, beautifully designed and illustrated book that is easily as attractive as it is provocative. And “State of the River Report 2016,” shared with journalists yesterday in advance of its official release this evening, is plenty provocative without straying near stridency.

So one wants to hope it is capable therefore of inspiring wider activism in defense of this crucial 72-mile stretch of the nation’s greatest river.

As noted up front in “State of the River Report 2016,” the river between its confluences with the Crow River at Dayton and Ramsey, and with the St. Croix near Hastings and Prescott, “is so unique that Congress designated it as a national park in 1988: the Mississippi National River & Recreation Area (MNRRA).”

The river changes character more within this park than anywhere else along its entire length.  Entering the park as a modest-sized prairie river, it plunges over St. Anthony Falls (its only true waterfall) and through a deep, wooded gorge (its only true gorge), and then emerges in St. Paul as a large floodplain river before flowing 800 miles downstream to St. Louis and beyond.

The park service owns very little land in this corridor, and while it devotes considerable effort to encouraging and coordinating the conservation work of others, it isn’t in a position to shower this unit with resources on the order of, say, Yellowstone or even the Apostle Islands.

The four years between these reports is but a blip in the life of a river, of course. It’s not even an especially large slice of this river’s modern history of use and abuse, which within living memory included a game-fish survey 25 miles downstream from St. Anthony Falls which found just two live fish.

So the purpose of the 2016 edition is not to trace small ticks upward and down of various indicators, but to broaden and deepen the analysis while also freshening and refining the masses of data that underlie them. An example is the decision to add three new types of pollutant to the analysis:

Whitney Clark, executive director of the friends group, told me he expects some readers will compare the 2012 and 2016 reports to form their own conclusions on short-term progress or decline in some area of special interest — say, the upstream spread of invasive Asian carp, which is shown to be more extensive in the new document. 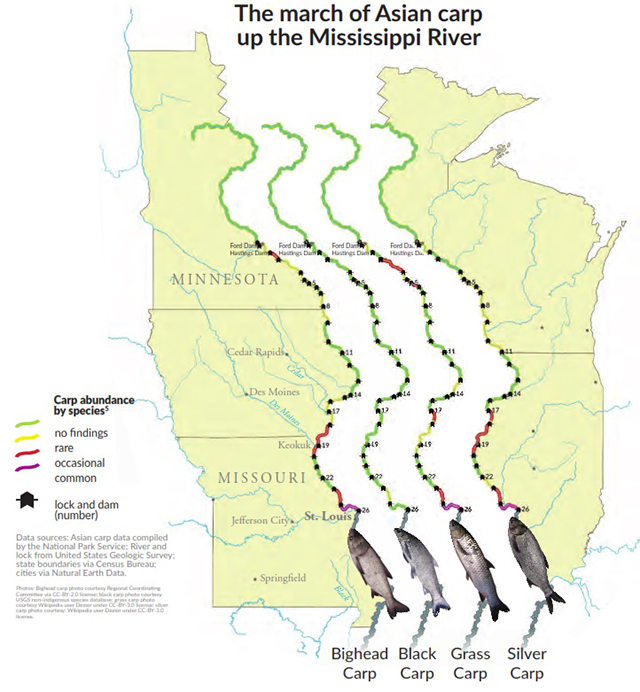 State of the River Report 2016
The spread of invasive carp in the river has increased.

“That picture is not heartening,” he admitted, but on the other hand, “last year we closed the Upper St. Anthony Falls lock to stop the spread, which will have a big impact. And the State of the River Report helped draw attention to that issue.”

We’re pretty confident the carp can’t pass through St. Anthony Falls, but they continue to move upstream (from more southern portions of the river), and while we don’t have a reproducing population in Minnesota yet, there’s a lot more work that remains to be done.

We’re calling for more research and testing of new methods that the aquatic invasives folks at University of Minnesota are developing. The intermediate goal is slowing the spread, and in the long run maybe we can manage their spread so they can’t take over.

Other policy victories since 2012: a state ban on triclosan in various consumer products (followed this month by a proposed federal ban), and elimination of coal-tar products as asphalt sealants. On the other hand, Clark said, one of the biggest stories in the report is how little has changed in policies that could ease impacts associated with agriculture:

Flow levels, sediments, nitrogen, phosphorus — they’re all still major, major problems. Phosphorus is actually down, but we’re still way above the standard and all of the gain that we’ve enjoyed comes from wastewater plants. So we’ve wrung out all of the juice we’re going to get from our point sources on phosphorus, and if we make any more progress it will be because we’ve addressed row-crop agriculture.

As for chlorides, he said, it really is good news that despite their huge surge the river is still well below water-quality standards for their presence. The bad news is that because the salts neither break down nor flush away, chloride pollution is essentially permanent.

Even that challenge may be simpler to deal with than the emerging concern over microplastics in their various forms, and especially the fibers that are shed from synthetic garments and other textile products that, it must be remembered, are heavily favored by many a river-loving outdoor recreationist.

The findings on microplastics are going to be news to most readers unless, ha-ha, they read your article yesterday.

It is new data and it’s interesting that 90 percent of the load is in the form of these fibers, which are everywhere. I wish we could propose a six-point plan for how to interdict these fibers, but we’re just beginning to have those conversations.

Probably tougher to ban fleece anoraks, I ventured, than triclosan and coal tar.

Well, yes, I prefer it when the horrible toxics going into the river don’t come from my closet. I was thinking back to my girls, when they were young, swaddled in their fleece jammies, sheets, blankets. And outdoors people know that “cotton kills,” so I banished a lot of that from my wardrobe a long time ago.

So, yes, mm-hmm: Looking in the mirror here.