As scientific interest grows regarding the problem of plastics pollution in freshwater, a new study of 29 rivers flowing into the Great Lakes finds every single sample to be carrying a variety of microplastics — often in concentrations far larger than have been detected so far in the lakes themselves.

Even more important, potentially, is a finding that plastics in fiber form — filaments shed by synthetic fleece clothing, disposable diapers, various textiles and cigarette butts — comprised by far the largest group of these long-lived, problem-causing forms of trash.

Microbeads were also present, of course, as were other plastic pellets and chunks of plastic foam, shards of plastic bottles, shreds of plastic film from bags and wrappers. But compared to fibers, those sources are much more easily controlled at the source, as with the microbead bans adopted by the Minnesota Legislature and later the U.S. Congress.

The fiber sources are less well understood, therefore less readily controlled, and also remarkably ubiquitous. Among other things, they seem to drift on the wind and be precipitated out of the air by rainfall, according to a recent study conducted in France (which just adopted a startling, first-in-the-world nationwide ban on plastic plates, cups and cutlery as a step toward reducing disposal burdens and shrinking plastics’ spreading shadow across the global environment).

In an interview with Wisconsin Public Radio, chief author Austin Baldwin of the U.S. Geological Survey’s office in Madison said that “the concentrations we saw in the tributaries were 10 to 10,000 times higher than in the Great Lakes.”

However, as his paper points out, such comparisons are complicated for a couple of reasons. Some studies of freshwater microplastics, in the Great Lakes and elsewhere, analyzed samples collected with seining devices whose meshes were larger than his team’s 0.33 millimeter screens. Also, sampling and counting methods have been refined in ways that tend to raise the counts. Also, the fibers and smallest microplastics take longer to settle in moving water.

A range of troubling impacts

But eventually the fibers and other plastic debris found in these 29 tributaries, from Minnesota’s St. Louis River on the west to New York’s Genesee River on the east, will find their way into the Great Lakes and add to a range of potential problems for their ecosystems. According to a USGS announcement of the paper,

Ingested microplastics can cause digestive and reproductive problems, as well as death, in fish, birds and other animals. Unhealthy additives in the plastic, including flame retardants and antimicrobials, have been associated with cancer and endocrine disruption in humans. Also, pollutants such as pesticides, trace metals and even pathogens can accumulate at high concentrations on microplastic particles.

And, as noted here about a month ago, the concerns for microplastics’ damage to birds in freshwater environments include possible perforation of their internal organs by the sharper shards, and even a form of induced malnutrition in birds who feed until they feel full, but have been gobbling up plastic waste in lieu of food. 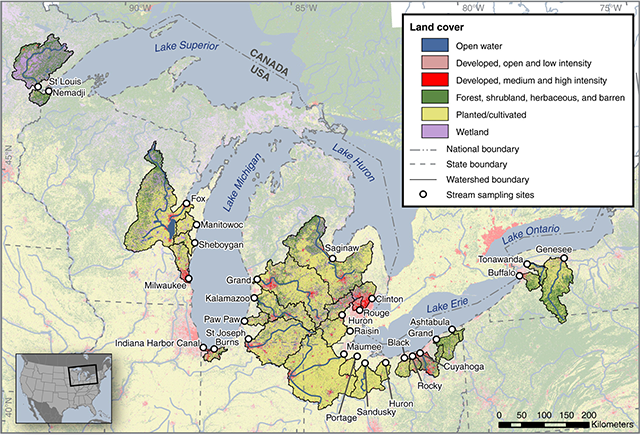 But if the potential threats to wildlife and ecosystems are well understood, the actual here-and-now damage remains to be quantified. So, too, do the sources of all this waterborne plastic — and, therefore, the best means of reducing it.

The aim of Baldwin’s team was to look at the types and concentrations of plastics pollution in rivers that flow through a variety of environments and in a range of different conditions. And the 29 rivers they examined, all on the American side of the Great Lakes basin, contribute nearly one-quarter of the water the lakes receive each year from tributaries.

Some were urban, others rural; some experienced a lot of runoff and others little; some had few if any wastewater treatment plants discharging to them while others had many (and one had 122). Treatment plants typically do not filter for plastic waste and may actually promote it by keeping the water churning as it passes through; some fibers, however, may sink into the sludge and stay there until the sludge is spread as farm fertilizer, at which point runoff can carry it back into a stream.

Each river was sampled three to four times, at intervals at least a week apart to minimize variation attributable to deposits from the atmosphere. After a half-dozen samples were discarded for reliability reasons, 107 remained, which may not seem like such a large number until you consider that every last one contained plastic debris.

In forms other than fiber — beads, foams, films and other fragments — plastics content was much higher in rivers running through urban landscapes, with higher population densities and a larger share of runoff area covered in pavement. And, as you might expect, more plastic turned up in the nets during times of higher runoff and stream flow.

Fibers however, “were ubiquitous across all land-use types” and their concentrations did not vary in ways that correlated with any of the variations in watershed attributes. In other words, they were everywhere and the immediate surroundings didn’t seem to have much influence on volumes. 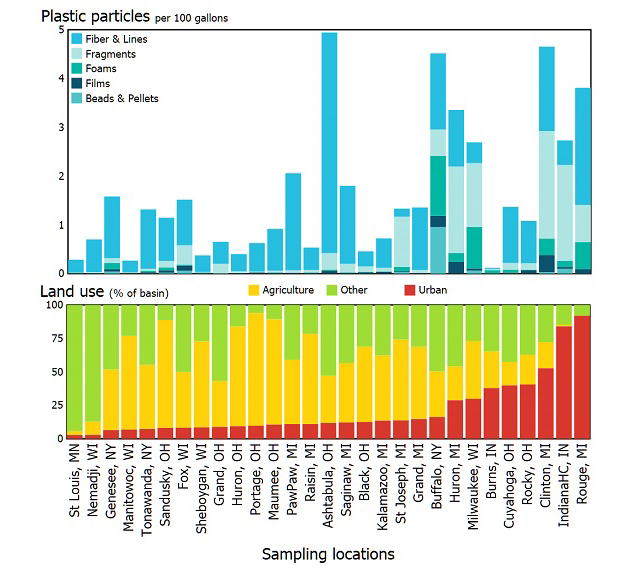 On average, the fibers accounted for about 70 percent of the plastics in any given sample. That in turn accounts for a distribution pattern in which the smallest size class of debris, dominated by fibers, accounted for nearly three-fourths of all the plastic collected.

By the way, the St. Louis River, which enters Lake Superior between Duluth and Superior, Wisconsin, had the lowest level of plastics pollution of any river tested for the study.

The four with the highest levels were, in descending order, the Huron River, which was sampled near Ann Arbor, Michigan; the Buffalo River at Buffalo, New York; the Ashtabula River at Ashtabula, Ohio; and the Clinton River at Mt. Clemens, Michigan.

But the variation among rivers has little to do with the overall impact on the lakes that hold 20 percent of the world’s fresh surface water. As the paper concludes, with considerable understatement,

While the implications of microplastics on ecological and human health are poorly understood, the increase in plastic production, stability of plastics in the environment, and long residence time in the Great Lakes ensure that these contaminants will continue to be of concern as they accumulate in the Great Lakes well into the future.

The full paper, “Plastic Debris in 29 Great Lakes Tributaries: Relations to Watershed Attributes and Hydrology,” was published in the journal Environmental Science & Technology and can be read here without charge.