There’s never a shortage of climate- and weather-related trouble to worry us, is there?

But now and then one wearies of the same old ruts and longs for a new territory of brooding, and as I caught up on my reading list over the weekend, I found a fine one: space weather and its threat to modern life as we know it.

You may well have seen the recent headline from Business Insider, because it quickly became clickbait all over the web: “A 100-year solar storm could fry our power grids — these are the places most at risk.”

Quite the grabber, that, and then there was the map showing that this particular hazard appears to reach maximum in a band that covers most of Minnesota and nearby portions of Iowa, Wisconsin and Michigan. The impact here could be as much as 100 times more intense as elsewhere. 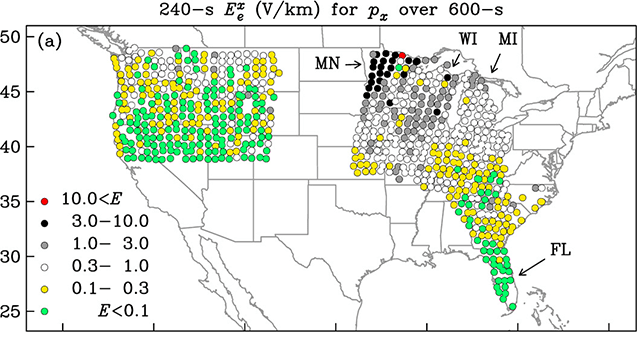 Should “fry” seem a hyperbolic word choice, consider that the map is part of a new scientific paper whose chief author, Jeffrey Love of the U.S. Geological Survey, told Business Insider that “a relatively strong geomagnetic storm could inflict $2 trillion worth of damage and a recovery effort that’d drag out for months or years.”

Consider, too, that such storms may be infrequent but are not exactly rare. A big one back in 1989 took down a huge hydro plant in Quebec and darkened the whole province for a time. About 100 U.S. power plants were affected and commercial aircraft briefly lost the use of their GPS instruments.

The voltage surge put into the system by the ’89 storm is estimated at about 2 volts per kilometer. Which doesn’t like much, right? But as Love explained, the voltage just keeps accumulating along thousands of kilometers of power line, and also fluctuates with the storm’s energy flow.

That’s uncontrolled voltage in a system designed to control voltage. And it’s not alternating current, it’s more like a direct current. That’s something electrical transformers really don’t like. They heat up and the coils inside can get fried.

On the map above, potential surges the size of Quebec’s 2 volts or smaller are represented by the green, yellow and white dots that cover most of the U.S. Gray dots show surges in the 1- to 3-volt range.

The black dots that cover most of Minnesota denote surge potential in the 3- to 10-volt range — 50 to 500 percent larger than Quebec — and that red dot on the North Shore is for a surge beyond 10.

Lest this seem like a sort of hypothetical, academic problem of interest only to eggheads, consider that Love and colleagues at USGS and elsewhere undertook their project in response to a directive from the Federal Energy Regulatory Commission (FERC) to come up with plans for insuring the reliability of the grid against such events.

As their paper, published earlier this month in Geophysical Research Letters, points out, the Quebec event wasn’t the only one in recent memory (footnotes omitted):

Years earlier, in August 1972, a magnetic storm that was, by most measures, of modest global intensity induced geoelectric  ﬁelds that interrupted the operation of a major telecommunications cable running between Plano, Illinois, and Cascade, Iowa. More recently, the Halloween magnetic storm of October 2003 induced measurable currents in power-grid systems in Scotland and caused operational failures in grid systems in Sweden.

There was also a near miss just four years ago, when a “solar superstorm” passed perilously to the planet but spared us all an impact that a post at NASA likens roughly to that of “an asteroid big enough to knock modern civilization back to the 18th century.”  That came at the peak of an 11-year cycle of activity for the sun, now waning.

FERC is trying to map the areas of greatest risk — a big lift considering that across much of the southern and southwestern U.S., throughout the Great Plains, the northeast and the mid-Atlantic region, critical measures of geology aren’t yet in hand.

Geology is one of two key drivers of Minnesota’s hazard profile, which by the way is getting a fair amount of attention in publications more scientifically inclined than Business Insider. Here’s how Science, a publication of the American Academy of Arts and Sciences,  explains the mechanics of a grid-killing solar storm and our region’s special vulnerability:

First, the shape of Earth’s magnetic field causes space weather to have bigger impacts at higher latitudes. When clouds of ejected material and energy from the sun hit Earth’s donut-shaped magnetic field, some of it is deflected, but the rest is shunted toward the ground near the magnetic poles. This material interacts with Earth’s magnetic field, creating auroras and the electrical surges that flow through the planet’s surface. The closer to the poles a power grid is, the more likely it is to experience problems during geoelectric storms. …

But that’s not the only factor at play: Some areas of Earth’s crust are more conductive than others. Over the last few years, the National Science Foundation has sponsored a “magnetotelluric” survey of large swaths of the United States—researchers, in essence, stuck voltmeters into the ground in a grid, and measured the flow of electricity between them. These data, supplemented by work done by USGS, helped researchers build up a picture of how electricity flows through Earth’s crust. In general, rock is not very conductive, which is why the currents from solar storms often flow through the metals of power grid infrastructure to complete their circuit. …

But the rock types do matter. For instance, the upper Midwest is home to two types of rock that together create a perfect opportunity for electrical currents. Sedimentary rock, which is more conductive, is underlain by dense, insulating igneous rocks left over from a time 1.1 billion years ago when North America almost split in half and the igneous rocks rose up from below. Today, the contrast between the two layers allows for a strong, local electric current during geoelectric storms.

Love’s paper has gotten remarkably little attention in Minnesota media, but a fine piece by Peter Passi in the Duluth News-Tribune on Saturday covered the findings well and added interesting perspective from a Minnesota utility’s point of view.

Kyle Rogers, a systems performance engineer at Minnesota Power, based in Duluth,  said the recent USGS report confirmed what the utility already knew: Its system could be vulnerable to geomagnetic disturbances.

“We’ve been doing industry-leading research since back in the 1990s on this subject, and one of our former engineers basically wrote the book on geomagnetic disturbances,” he said.

Rogers was referring to John Kappenman, who started his career at Minnesota Power, then went on to become an expert working with utilities near and far desiring to protect their systems from geomagnetic disruptions. His firm, Storm Analysis Consultants, remains based in Duluth.

For his part, Kappenman said a major geomagnetic storm could trigger a grid failure of a scope sufficient to become “one of the largest natural disasters that the country could face.” Both said Minnesota Power monitors equipment during periods of high solar discharge, taking equipment off-line as it overheats — but Kappenman said the industry needs to do a lot more safeguarding, without specifying just what that might be.

However, he had this timely suggestion for FERC: Tell the utilities to get over their worries about inviting stricter oversight and just share the data they’ve already gathered about the conductivity of the ground beneath their systems.

While I certainly encourage more data gathering by the scientific community in this way, the reality is that we’ve already gathered a lot of data by electric utility companies measuring for geomagnetic-induced current across the U.S. … [which] far exceeds the coverage that’s provided by this scientific effort that the USGS is now involved in.

I think I’ll go back to worrying about climate change now. Maybe its coming impact on walleye and bass fisheries.

Uh-oh. Turns out that space weather also presents serious risk to the globe