Early autumn’s big breezes brought a windfall of natural art to the front door the other day, a huge and gorgeous paper sculpture built by yellowjackets.

Though I could have worn it as a helmet, it was only a fragment of the whole nest’s outer envelope, perhaps the lower two-thirds of a structure that might have been a foot or so in diameter and, well, who knows how tall? They’ve been known to approach 30 inches.

We had seen it intact but only in silhouette just two days earlier, as we set off down the driveway for an evening walk. Sallie pointed to the top of a slender tree back in the woods and now leafless: Had I ever seen a nest like that?

I had not, and though it was about 60 feet over our heads we agreed it was unlikely to have been built by squirrels (too tidy) or any bird that came to mind (too big, too smooth, weird shape). Maybe some kind of paper-making wasp or hornet, I guessed, except I couldn’t imagine how they made it so big, or why we’d never noticed it in years past.

Our place at Skunk Hollow is blessed, too richly at times, with wasps-or-hornets, as I’ve called all non-bee  stingers all my life, meaning to someday learn the differences.

Mostly they nest over our doorways and we wait for a cool, sluggish morning to zap them with that marvelous aerosol foam you can shoot in a 20-foot stream, enabling sniper-like attacks from safe remove. Or they nest in the dirt beneath our scrubby lawn, reminding us now and then that mowing in shorts is risky.

I brought the lovely fragment inside, after giving it a quick check for inhabitants, admired its texture and coloration for a while, then compared it to the baseball-sized nest on an osier stem that we keep in a vase on the piano. The materials looked similar but the size/shape differences were so vast that I decided to take its picture, next to a wine bottle for scale, and send it to Jennifer Sereno in the communications section at Wisconsin’s Department of Natural Resources. 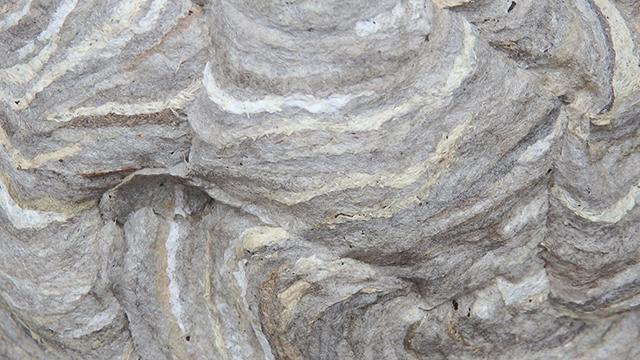 MinnPost photo by Ron Meador
After giving it a quick check for inhabitants, I admired its texture and coloration for a while.

Sereno kindly passed my query to the DNR experts and before breakfast the next morning came a reply from forest health specialist Todd Lanigan: The nest was made by the bald-faced hornet and is an entirely common sight in this region. He included a link to a Bug of the Week profile produced by the Bug Lady at the University of Wisconsin-Milwaukee, which put me on a fascinating path of discovery.

A yellowjacket in B&W

It turns out there are many wasps but only one species of true hornet in North America, and despite their name our bald-faced friends are not it. They are yellowjackets, therefore wasps, though they are not yellow anywhere, either. They are black with white markings and at nearly an inch in length are about twice the size of other yellowjackets.

They are also known by such names as black-faced hornet, white-faced wasp, etc., and the bald refers not to a lack of whiskers but to their piebald, dark-and-light pattern on their faces.

Their stings are especially painful and fiery because of the potency of their venom, which they can also squirt into the eyes of an approaching attacker – an unusual capability that other wasps (and rattlesnakes) are sometimes, usually wrongly, thought to possess. They’re typically described as fierce in defending their nests, a reason to be glad our nesters liked their altitude. 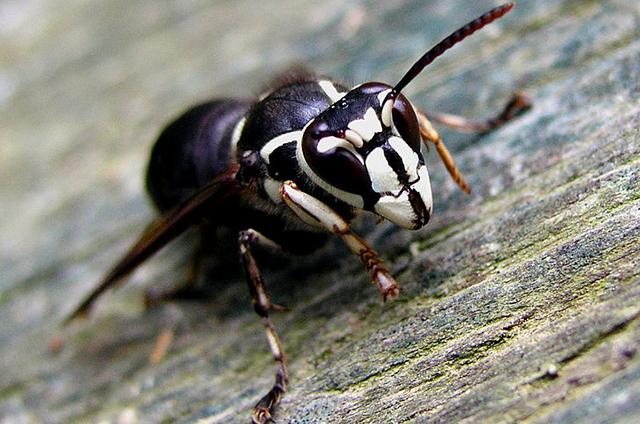 (A few summers ago, as I reached into the coupler on a boat trailer in the driveway, something stung my finger with a force that felt like the blow of a red-hot blacksmith’s hammer. Now I know.)

Like most wasps, hornets and bees, this yellowjacket is a social species – or more technically eusocial, which means the division of tasks within their colonies extends to the assignment of parenting and reproductive duties to some members and not others. A few mammals and other animals, notably naked mole rats and certain shrimp, are also eusocial but it is principally a trait among insects, especially the order Hymenoptera (wasps, hornets, bees, ants).

The great sociobiologist E.O. Wilson used to argue that humans, too, should be considered eusocial, perhaps because of our collective child-rearing in schools and day-care centers, but that view is generally rejected by scientists because, after all, pretty much any of us are allowed to reproduce at will. Which, considering the global population trend and Donald Trump’s enduring support, may not really be to our long-term advantage as a species.

The bald-faced hornet makes paper by chewing weathered or rotten wood and mixing it with saliva to make a pulp, which it then extrudes to make both the nest’s interior comb structures and a large outer envelope of multiple layers, shaped like an upside-down pear, complete with an exit opening near the bottom and a series of vents at the top for fresh air and temperature control.

Each nest is started in the spring by a queen – the only colony member to survive the previous winter – and when it gets to roughly tennis-ball size she hands it off to sterile workers. Unfettered by sex and brood-rearing, they work fast.

Construction surges for several weeks and ends after four to seven months (depending mostly on climate), with the nest continuing to expand outward as the combs widen and the envelope’s inner layer is re-pulped and deposited on the outside.

The nests may come to house anywhere from 100 to more than 1,000 wasps, with the average around 400. The nests are single-use, except occasionally in the tropics, and tend to be destroyed by food-seeking birds. Or taken, according the Bug Lady, by certain humans who admire their aesthetic qualities and display in museums or private homes.

The species was described by Carl Linnaeus back in 1763, and not quite 200 years later came an extraordinarily close observation of a colony at a cabin near Ely, Minnesota, thanks to the queen’s choosing as her location the outside of a glass window, which became the nest’s rear wall.

This enabled the entomologist W.V. Balduf of the University of Illinois, along with various friends and relatives, to watch and photograph a colony of bald-faced hornets – which he called white-faced wasps – through virtually an entire season. He saw the nest grow over 45 days from about 9 inches by 7.5 to 21.3 by 17.3, with most of the enlargement coming in the first two and a half weeks.

Window on the wasps

And because I cannot hope to improve on his prose, I will just yield the rest of my space today to excerpts from Balduf’s account, published in 1954 in the Annals of the Entomological Society of America, and posted on the Web by the folks over at driftlessprairies.org [PDF]. How much can have changed for this yellowjacket since then?

In applying the pulpy mixture of salivary secretion and masticated plant fiber, the wasp invariably crawls backward, and, in so doing, her mouthparts appear to clip off bits from the anterior side of the adhesive mass and simultaneously to apply the bits to the edge of the layer or dormer. One such mass suffices to extend a segment of edge about 30 mm. long. Having thus disposed of the load, the worker next crawls briskly forward to the starting point of the newly-added segment and again retrogresses over it but now compressing and further broadening the still plastic pulp by pinching it between the mandibles. A single lump serves to enlarge the layer or dormer 1 to 3 mm. The entire operation is performed briskly and precisely.

The original, topmost comb is largest in diameter, and the second, attached to the center of the first, is smaller, and the third and others are successively smaller than the preceding. Thus the nest wall takes on a conical shape since it conforms to the diameters and circumferences of the combs. Second, as the season advances, the workers construct cupolas or dormers over the upper portion of the nest. Usually these are vertically short and horizontally broad, with the open ends mostly directed downward. As time passes, other dormers are built over previous dormers.

Observations suggested that the dormers may be a device whereby the wasps produce a more or less uniform degree of surfacial roundness, and that, therefore, they construct dormers in locales where the surface chances to be depressed. This suggestion implies that the workers have a means of measuring degrees of roundness, i.e., a sense of contour.

The workers reserve sufficient space between the several combs to permit them free access to all cells of the combs. This spatial achievement cannot reasonably be assigned to chance, and suggests the wasps possess a means of measuring the depth of the space between adjacent combs. Wherein this means resides is certainly not clear, but may consist of the height of the wasps as they stand or move. Should combs be too close together at any point, the mandibles might be employed to chew the obstruction away.

Two distinct operations are involved. First, the envelope or nest wall, composed of a series of more or less parallel thin layers of wasp-paper approximately 5.0 mm. apart, is enlarged by the simple device of tearing out, bit by bit, the smallest, oldest inner layers adjacent to the combs, and utilizing the material thus salvaged to build new and larger layers on the outer surface of the wall. Second, the combs are not torn down, as the wall layers are, but gradually increased in diameter by the addition of new cells to their peripheries.

The workers were docile and well-behaved at almost all times so long as they and their nest were treated with consideration. They permitted us to stand, as we often did, within inches of the aperture for observation and photography. We stood or moved directly in their fly way, and they detoured around us without becoming perturbed. They appeared preoccupied with foraging and building, and seemed accustomed to our presence.

In the six weeks the colony was observed, observers or visitors were stung only four or five times.

Letter From Skunk Hollow: The wind brings a work of insect art to earth