Perhaps you were as surprised as I was by the reports in the Strib and on MPR this week about how leafy Minneapolis could reap especially large public-health returns by investing more of its tax base in trees.

And that is indeed an interesting, if slightly anomalous, example to come out of “Planting Healthy Air,” The Nature Conservancy’s compelling new look at a green — and cost-effective — solution to the world’s problems of heat waves and sooty air.

Both problems are on generally upward trajectories worldwide. And as you can see from the map above, the Twin Cities is at least slightly above the World Health Organization’s recommended maximum for ambient-air concentrations of the smallest particulates, called PM 2.5 because their diameter is below 2.5 micrometers.

This small size, which makes them nearly invisible to the naked eye until they form clouds of haze, allows PM 2.5 to be taken much more deeply into the lungs than other pollution particles and to wreak considerable havoc, especially for people with asthma or otherwise compromised respiratory systems.

It’s not only Minneapolis’ soot levels that would make tree plantings return comparatively high benefits for each dollar invested; it’s that cities in northern latitudes are considered more vulnerable to, and less prepared for, the heat waves to come.

But on both threats the situation is more dire, and also worsening more rapidly, in many other places and most especially in a swath of the developing world from west Africa to east Asia. And it’s the report’s findings for these portions of the world that I feel deserve more attention today.

Citing a range of reputable research, the report lays out this vision of the future:

The 21st century will be the urban century, as more than 2 billion additional people arrive in cities globally. This rapid urbanization is unprecedented in human history, and by 2050, the vast majority of humanity will live in cities, towns, and other urban areas.

Yet at this moment of the “triumph of the city,”  the world’s urban areas are also facing many significant challenges, from providing jobs and utilities to a burgeoning citizenry, to protecting their residents from crime and violence, to safeguarding urban environmental assets. Among the most pressing of global urban environmental challenges is air quality.

In most cities, the most damaging air pollutant is particulate matter, which is emitted from a variety of sources, especially the burning of agricultural residues, fuelwood, and fossil fuels.

Already, heat waves are the weather-related disaster that causes the most mortality globally,  killing an estimated 12,000 people on average annually and making life unpleasant for millions. … One World Health Organization report forecasts that by 2050, deaths from heat waves could reach 260,000 annually (footnotes omitted).

So, over the next 35 years, the world can reasonably anticipate an annual death toll approaching 6.5 million from the combined effects of PM 2.5 and heat stress.

Shifts to cleaner fuels, improved emission controls on industrial smokestacks and other investments in what the report calls “gray infrastructure” can bring a reduction in PM2.5, but they are costly.

The Nature Conservancy research is not the first to quantify the large-scale benefits to air quality delivered by the urban forest — a notable analysis of Britain’s largest city by the London i-Tree Project came out last year — but it appears to be the first to take the global view and also to focus so particularly on “street trees.”

Trees deliver most of their air-cooling and soot-absorbing benefits within 1,000 feet or so, which means that preserving wooded acreage in large blocs of parkland is not as useful as replanting the trees torn up to expand the urban street grid. 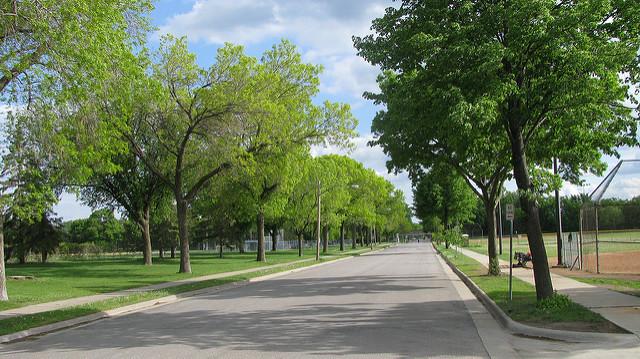 CC/Flickr/David Erickson
Preserving wooded acreage in large blocs of parkland is not as useful as replanting the trees torn up to expand the urban street grid.

It’s important, too, to focus new plantings in neighborhoods where they can do the most good — not necessarily where the soot and excessive heat problems are most concentrated, because these move around a lot, but where the population densities are highest.

To gauge the potential global impact of such plantings, researchers gathered data on population density, pollution levels and land cover for 245 cities around the world — which together hold about one-quarter of the world’s current population — then estimated the current and potential extent of their street trees.

As of today, their calculations suggest, street trees are delivering a significant cooling benefit to 68.3 million people at the hottest times of the year, and a reduction in PM 2.5 levels to more than 63 million.

If $100 million were invested annually in new street trees, their calculations suggest, the temperature benefits could be extended to an additional 77 million people and PM 2.5 reductions to 123 million.

That’s a lot of money, of course, especially in the developing world — but maybe not so much compared to other mitigation measures already being used, most of them in the “gray infrastructure” category. In return-on-investment terms, the plantings beat out a wide range of industrial emissions controls and nearly rival clean-fuel programs.

On the temperature side, fewer responses are available. Tree planting seems to deliver a better return than “green roof” plantings and “cool pavement” designs, but may outperformed by projects that paint rooftops white or otherwise increase their reflectivity.

And though it was beyond the scope of “Planting Healthy Air,” the authors note that the urban forest has other advantages that can’t be matched by, say, a sulfur dioxide scrubber atop a smokestack.

Trees are the only solution that both clean and cool the air, while simultaneously offering other benefits, including urban green space for residents, habitat for wildlife and carbon sequestration. Tree planting is a solution that mayors and other municipal leaders around the globe can implement to improve the lives of residents within their communities, reducing air pollution and slowing climate change.

The home page for The Nature Conservancy project, with links to the full report and other materials, is here.