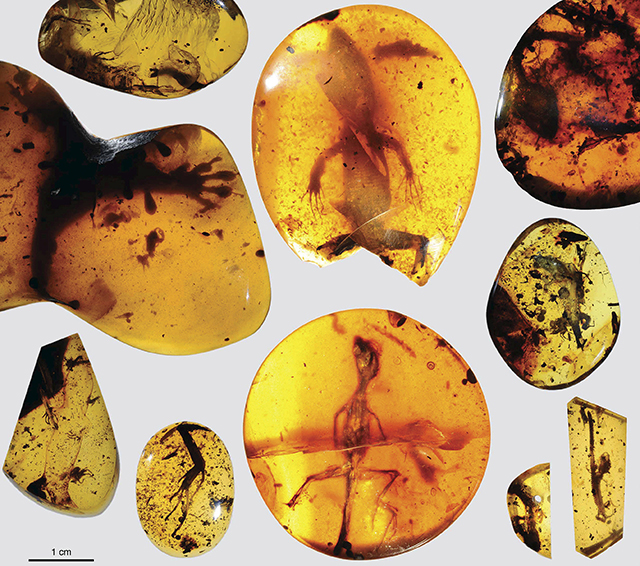 REUTERS
“Roughly the size of a dime, these tiny lizards gave scientists an outsized peek into reptilian diversity 100 million years ago.”

News about climate and energy dominates again the year-in-review lists coming out since Christmas in the world of environment-minded publishing.

A close second in the Top 10-type rankings, it would appear, is the ascension of Donald Trump — chiefly, however, because of all the dumb/dangerous stuff he has said about global warming and its threats. “Denier-in-chief” is becoming the barb of choice, which I think confers too much stature on a man who is mostly mouth, merely parroting points prepared by people who actually grasp the science they pretend is hoax.

And I was impressed in my inter-holiday reading by roundups and perspective pieces that left the usual subjects to come up with something quite new, different and intriguing.

Case in point: Smithsonian’s “This Year in Ancient Amber,” a richly illustrated tour of the year’s discoveries of prehistoric life fragments preserved in jewels of plant resin — and we’re not just talking insects and pollen:

Roughly the size of a dime, these tiny lizards gave scientists an outsized peek into reptilian diversity 100 million years ago. The yellow-tinged time capsule from the mid-Cretaceous Period preserved several lizards in exquisite condition, with itty-bitty claws, teeth, toe pads and even scales intact. Though the fossils were discovered decades ago in a Myanmar mine, scientists only recently gained access to study them. …

Evidence of feathers in the fossil record usually comes in the form of impressions left in rock, made by plumes degraded long ago. So scientists were stunned to uncover this next find: a pair of fully intact bird wings.

The wings belonged to a hummingbird-sized species that took to the skies roughly 99 million years ago. Their amber preservation retained spectacular details, which suggest that feathers of ancient birds are surprisingly similar to creatures today. The main difference between these ancient birds and their modern cousins is that these tiny creatures appear to hatch almost fully developed, decked out with flight feathers and claws at the ends of each wing.

Among the traditionalists, Jason Mark served up a fine Top 10 list at Sierra magazine, where he’s the editor. The denier-in-chief leads Mark’s list, but I’m happy to report that the second spot is held by the pipeline-stalling protests at Standing Rock, an event I think many are coming to agree will be reverberating for a long time.

His next eight: The pattern of intense fires and floods linked in various degrees to climate disruption; the international emissions agreements reached in Rwanda and put into effect in Paris; President Obama’s designation of new national monuments and marine sanctuaries; the continuing contraction of Big Coal; California’s demonstration that economic growth and greenhouse-gas reductions are compatible; the assassination of Honduran activist Berta Cáceres; the drinking water crisis in Flint, Michigan; and the pending removal of Yellowstone’s reintroduced grizzlies from endangered status.

Over at Bloomberg, copy editor Susan Doyle put together a crisp slideshow on the year’s top environment/energy news, awarding two separate spots to courtroom hassling over Obama’s Clean Power plan: the Supreme Court stay at No. 1 and the appeals court arguments at No. 5.  Also on her list:

The huge and long-undetected methane leak near Los Angeles; new federal limits on methane venting in oil and gas production; enactment of the Lautenberg chemical-safety act; European Union’s ratification of documents allowing the Paris climate accord to take effect earlier than expected; the Rwanda agreement to further control globe-warming hydrofluorocarbons; Volkswagen’s $14.7 billion settlement of a case involving its faked diesel data; enactment in mid-December of the national water infrastructure bill to help Flint and other communities in similar trouble.

On the bright side

Several lists attempted, sometimes heroically, to find listworthy good news. One of the more persuasive (and less strained) was wrought by Maureen Nandini Mitra, editor of Earth Island Journal, whose bright spots of the year included big wins for ocean protection (not just Obama’s sanctuary designations but his ban on oil drilling in the Arctic, along with a new international effort to protect a stretch of Antarctic coast), rapid expansion of solar power investment worldwide, and SeaWorld’s decision to stop breeding captive orcas.

She even found a silver lining in the Malheur National Wildlife Refuge occupation, concluding that the thuggish behavior had inspired new support for conservation efforts there by both staff and the surrounding public.

Another earnest effort came from Shreya Dasgupta at Mongabay, who offered the “Top 10 Happy Environmental Stories of 2016.” These included the marine protections and Arctic drilling ban, which made many lists, but also some interestingly unique entries: new efforts to conserve peatlands in Indonesia, creation of a protective reserve for gorillas in Congo, new restrictions on trade in wildlife and ivory, and discovery of the world’s tallest tree(!)

The real attention-getter, though, was item No. 1 — Animals are bouncing back from the brink of extinction. Really? Yes, in a small handful of cases, including California’s island foxes and Sierra Nevada yellow-legged frog, but the overall trend is still downward and probably accelerating. Item No. 10 points to 20 new animal and plant species discovered during the year, and the picture of the colorful dancing spider is very cool.

I always admire the year-end conversation between Steve Curwood and Peter Dykstra over at Living on Earth, but this year their top topics overlap a lot with those discussed above. They alone, in my reading, noted that the year began with the toppling of what was then the world’s last two climate-denier heads of state — Canada’s Stephen Harper and Australia’s Tony Abbot — but then of course the Americans came up with a topper in Trump. A pungent thought about social context from Dykstra:

It’s pretty clear that the environment is a more divisive and partisan issue than ever. Environmental advocates need to find a way around that — it’s a daunting task given the orientation of congress and the incoming administration. Particularly since their election success is a pretty clear message that there’s not much of a political cost for showing contempt for environmental protection. On the media side, there’s some really good, strong environmental journalism out there, but it’s not taken seriously by those in charge. It’s up to editors and news executives to rise to the challenge of all the stories to be told, and, if you’ll pardon the expression, grab them by the pollution.

As for lists focused strictly on climate, the selections were more alike than diverse and most of the headlines will be familiar to you — atmospheric CO2 going over 400 parts per million and staying there, hottest annual average temperatures on record in many parts of the world, the unprecedented melt rates of polar ice at both ends of the earth.

One standout piece focused instead on the consequences of all this. Writing in Quartz, Neha Thirani Bagri argues that coral die-offs in the Great Barrier Reef, a coming crisis in world coffee production, and other here-and-now impacts make 2016 “the year climate change got real.”

I also admired Marianne Lavelle’s courageous decision to make an even-handed assessment for Inside Climate News headlined, “2016: Obama’s Climate Legacy Marked by Triumphs and Lost Opportunities.” In this time of deep feeling for our president, this blend of appreciation and grief so many of us share, it remains important to resist hagiography.

Even Packaging World got in on the year-in-review theme with a list of the “Top 10 sustainable packaging stories of 2016.”

Several publications engaged in self-praising lists of their own best work during the year, including the Pacific Standard and the Center for Public Integrity, but the work was good and I don’t object to their taking pride in it.

Grist, on the other hand, pointed to others’ good work.

Last but hardly least, I commend National Geographic’s stunning review of “our best videos, photos and stories” on environmental subjects. Reserve some time, and some awe, for this one.