There is no question that President Donald Trump could become the most environmentally regressive occupant the White House has seen since an earlier era of the robber baron. By all indications he’d delight in the distinction.

But, people, we need to keep our eye on the ball here – and that means paying close attention to congressional Republicans quietly using the bluntest of law-unmaking instruments to reverse sensible regulations they disparage, wrongly, as last-minute overreaching by Barack Obama.

Like, so far, a rule to restrict the volumes of waste that coal companies can dump into public waterways. Or another to rein in the waste of natural gas by oil and gas companies who find it more profitable to pump it into the atmosphere, or burn it off, than to capture it, sell it and pay the royalties they’d owe for turning public resources into a private product.

Not all of the rollback targets are environmental in nature, of course. Another restricts background checks on gun purchases by certain people with mental disabilities. Still another restores the right of American energy executives to pay bribes in foreign countries without federal meddling.

These lawmakers are not content just to posture and tweet; they want to deliver for their donors. And the cudgel they have now taken up is the Congressional Review Act of 1996, a relic of the Contract With America that has been attempted seldom – and successfully only once – as a way of overturning Executive Branch actions by simple majority votes of the House and Senate.

It has begun to get a little attention in general-interest media – my colleague Sam Brodey discussed it in a post on Jan. 2 – and the typical description says it allows Congress to undo actions taken in the previous 60 days. But that’s not quite right.

It’s 60 legislative working days, and there are other technicalities as well. The upshot, according  an analysis by the Congressional Research Service [PDF], is that any actions taken after last June 13 are subject to rollback by this one-party Congress.

No filibusters, no litigation

Also, the law explicitly exempts actions under the CRA from filibuster in the Senate and review in the courts. Which means the only check is a presidential veto, of which Obama cast five and Trump can be expected to cast zero. 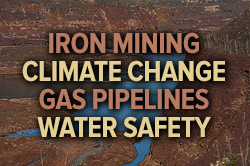 Finally, the grounds for rollback under CRA could hardly be broader. A resolution need only assert that the targeted regulation will cost too much to enforce, duplicate existing efforts, or give an agency authority beyond its legal scope.

In the case of the new methane rule, for example, it is sufficient to say that the Interior Department’s Bureau of Land Management – responsible for nearly all regulation of mining and drilling on federal and tribal lands – lacks authority to restrict the waste of valuable, publicly owned fuel for which it grants leases and collects royalties, because this is essentially an air-pollution curb and therefore in the jurisdiction of the U.S. Environmental Protection Agency.

A federal court in Wyoming has already rejected an industry challenge to the methane rule brought on pretty much those same grounds. But no matter. The CRA rollback sailed through the House last week on a nearly party-line vote of 218 to 180, with all of Minnesota’s Republican members and Democrat Collin Peterson voting in favor.

(The delegation lined up the same way on another BLM-related rollback, this one making changes in the way the public registers its input on agency planning; that vote has drawn the ire of sporting and outdoor recreation organizations [PDF] including Trout Unlimited and Pheasants Forever.)

In raising an eyebrow at Republican claims that the BLM rule is essentially an air-pollution measure, I do not mean to minimize methane’s impact on local air quality or on global warming. Both are considerable. But it is worth remembering that the Obama administration’s move to modernize – for the first time in decades – federal regulation of methane waste through venting, flaring and equipment leaks was motivated initially by BLM concerns, back in 2004, about lost royalties to the U.S. Treasury.

Environmental concerns are of course part of the agency’s rationale for the new rule, but not its primary purpose:

Venting, flaring, and leaks waste a valuable resource that could be put to productive use, and deprive American taxpayers, tribes, and States of royalty revenues. In addition, the wasted gas may harm local communities and surrounding areas through visual and noise impacts from flaring, and contribute to regional and global air pollution problems of smog, particulate matter, and toxics (such as benzene, a carcinogen). Finally, vented or leaked gas contributes to climate change, because the primary constituent of natural gas is methane, an especially powerful greenhouse gas (GHG), with climate impacts roughly 25 times those of carbon dioxide (CO2), if measured over a 100-year period, or 86 times those of CO2, if measured over a 20-year period.  Thus, measures to conserve gas and avoid waste may significantly benefit local communities, public health, and the environment.

Nor is the amount of waste trivial. Back in 2012, the National Oceanic and Atmospheric Administration published a photograph showing that gas flaring in the North Dakota oil/gas patch was now visible from space – about as bright as but bigger than ground light from the Twin Cities metro area. As for lost value, the BLM says:

Federal and Indian onshore lessees and operators reported to the Office of Natural Resources Revenue that they vented or flared 462 billion cubic feet of natural gas between 2009 and 2015—enough gas to serve about 6.2 million households for a year, assuming 2009 usage levels.

Though the party line as voiced by Jason Lewis, the newest Minnesotan in the House, is that the CRA rollbacks are aimed at the kind of “midnight rules” mischief that, wink-wink, both sides indulge in as the White House changes hands — well, that’s just ridiculous.

Though the methane rule did reach final form in November, it had been in the works since 2014, moving forward under well-established, transparent procedures and timetables laid down in law and respected by the Obama administration, often to the frustration of environmentalists who wanted speedier action.

Finally, lest there be any doubt at all about where the real impetus arose for the CRA attack on the methane rule and others at the nexus of energy and environment, I refer you to Eric Lipton’s excellent New York Times piece last week, which begins:

The document carried the title “A Roadmap to Repeal,” a concise list of Obama administration environmental regulations that a Koch brothers-backed group was pressing President Trump and Congress to quickly reverse after Inauguration Day.

It was a tally of rules that energy industry executives and lobbyists had waged a futile fight against for eight years, donating millions of dollars to lawmakers who vowed to help block them, filing lawsuits to try to overturn them and hiring experts to generate reports that questioned the need for them.

But in a flurry of activity this past week, Congress did what Charles G. and David H. Koch — who own a conglomerate that sells hundreds of products, including gasoline, jet fuel and coal — and other industry leaders had been asking for.

Using a rarely invoked law, the Republican-controlled Congress nullified a measure intended to curb the venting of gas wells on federal lands, and began the process of rolling back other regulations, including one enacted to limit damage that coal mines cause to streams — each items on the “Roadmap to Repeal.”

Trump’s no friend of the environment, but Congress is doing the real damage