An intriguing and important-sounding new research paper caught my eye on Sunday, with its finding that the world’s oceans have been warming at a much faster pace than is generally recognized.

Because seawater holds more than 90 percent of the excess heat that arrives from the sun but, thanks to greenhouse gases, isn’t promptly returned to space, that conclusion seemed to fall somewhere between stunning and alarming. Because it had been published in Science Advances, a journal of the American Association for the Advancement of Science, its credibility was clear.

The basic outline of the research was straightforward:

But when I reached the discussion of methods that enabled these conclusions, I was instantly out of my depth. A typical passage explained that the researchers, led by Lijing Cheng of the Chinese Academy of Sciences in Beijing, had “used an ensemble optimal interpolation method combined with covariances from Coupled Model Intercomparison Project phase 5 multimodel simulations to provide an improved prior guess.”

Luckily the research team included John Abraham, a professor of mechanical engineering at the University of St. Thomas who has a deep interest in global warming and its impacts. He also has a gift for making climate science intelligible to nonscientists, and does so periodically in a column for The Guardian called “Climate Consensus — the 97%.” 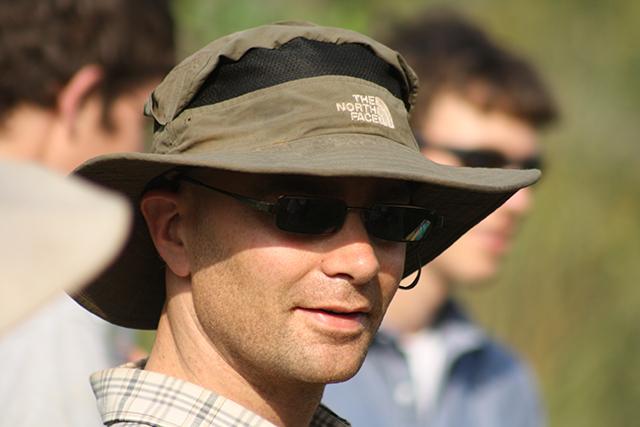 So I asked for an interview and we ending up talking for a good long while about the new paper, its troubling implications and Abraham’s enduring optimism that we still possess the means to work out way out of this mess.

Following are excerpts from that conversation, which began with my asking if the new paper demonstrates that the oceans’ role is the aspect of global warming that remains least well understood and the most difficult to address in climate modeling. Abraham’s answer was characteristically clear and concise: No.

Why the ocean matters so much

But let’s say we’re off in clouds by, oh, 50 percent. That is paltry compared to being off in the oceans by 50 percent, because the oceans are taking up 93 percent of the global warming heat, and if we’re off by just a little bit it has big implications. So I would say that the oceans are the part that’s most important to understand correctly.

I asked Abraham to explain why knowing the rate of ocean warming was so important, given that we’re already monitoring, analyzing and projecting trends in air temperatures at the Earth’s surface, and up to the outer reaches of the atmosphere. He said there were two distinct reasons:

Number one, if you want to predict how fast the Earth will warm in the future, you have to know its current rate of warming. And the only way you can do that is via the oceans. The oceans are a proxy for the entire planet, and understanding how fast they’re warming tells us how fast the world is warming — where we’re going to be in 10, 20, 100 years.

From a more immediate standpoint, warming of the oceans affects the climate we experience today. Oceans cover 70 percent of the planet and they dominate the weather. The clouds that form, the currents of air, are driven by the oceans; oceans can affect rainfall and drought.

The power of superstorm Sandy was driven by ocean temperatures off the East Coast. Temperatures off the West Coast have driven California’s drought and now the heavy rainfall, because when the ocean warms the atmosphere holds more water and you get more rainfall. Another example — the record flooding in Duluth a while back.

I asked Abraham if this wasn’t a different view from one that seemed to dominate some years ago, which held that the oceans’ ability to absorb heat amounted to an unexpected lucky break because they were basically storing the warmth and slowing the rise in surface temperatures.

The oceans are a buffer in two ways: They soak up heat and they soak up carbon dioxide. And were it not for the oceans we’d be in a heck of a lot more trouble right now. The buffering gives us time to take action.

But it’s not like the heat stays there forever; it’s always leaving, too. We’ve just seen the three hottest years in a row, as measured in the atmosphere — 2015, 2015, 2016 — and those records were set because of heat transfers from the ocean.

Earth’s temperatures are steadily increasing because of greenhouse gases, but we get some fluctuations. Some years it will be a little hotter, some years a little colder. The oceans have cycles, and those cycles deposit or withdraw energy to or from the atmosphere, which shows up as a temporary short-term warming or a temporary short-term cooling — the biggest way this happens being the El Niño-La Niña cycle.

So it’s a zigzag curve, still going up and up, with the overall rise being driven by global warming, and the variations driven by the oceans.

We talked for a while about the Argo floats, which he called the gold standard for measuring ocean temperature, and I asked if he could explain for nonscientists how data from a few thousand floats covering less than 30 percent of the global ocean could be extrapolated to reach reliable overall findings about the temperature trend.

We found that we don’t actually need sensors everywhere, because ocean temperatures are stable — not in time, but in space. The technical term would be homogeneous, but what I mean is that temperatures are the same across hundreds of miles. And so we can actually ascribe a large region of ocean water to a single sensor. But then we checked it to see if we’d gotten accurate results, and found that we did.

We also used satellite measurements of sea-level rise. We know that ocean water expands when it’s heated, and that about 40 percent of sea level rise is from thermal expansion. So using altimeter measurements from the satellites, we get almost exactly what we would predict from the Argo temperatures.

In 2016 we published another paper that compared computer models of the climate to ocean heat content, and found that these also matched almost exactly. 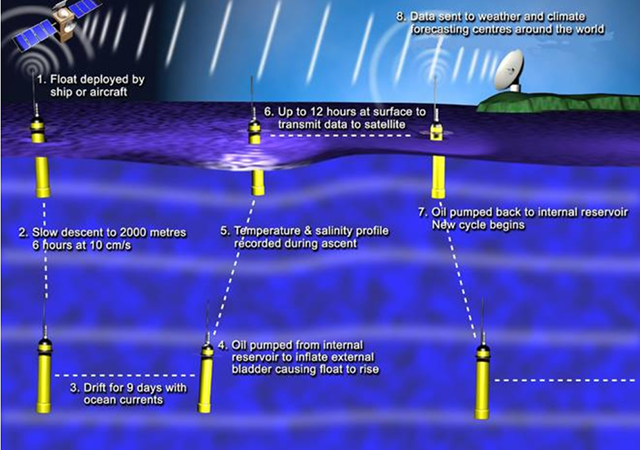 I had not seen that paper, but had read a Guardian column Abraham had written about the findings, with rather a deft use of “social math” to quantify the heat it takes to raise the global ocean temperature by amounts the paper measured in factions of a watt per square meter. I asked him if it was still valid, and he said it was, so I’ll close today’s piece by quoting it:

Thursday: How Argo data debunk the notion that global warming has slowed or even paused since 1998.

This paper, “Improved estimates of ocean heat content from 1960 to 2015,” can be read and downloaded here [PDF] without charge.

Uh-oh. Ocean temperatures are rising much faster than we’ve been thinking