A ripple of hope for Minnesota’s environmental traditions rolled over me early Wednesday afternoon as Sharon Day of St. Paul and Bois Forte sang to the water.

This was in a park across the street from the state Capitol, where a very large rally was to take place in opposition to a very long list of regulatory rollbacks and budget cuts favored by the Legislature’s Republican majorities.

It was chilly in the park, and damp, and as the hour for a prerally ceremony arrived the attendance had been surprisingly small, although it was growing by trickles as Day explained that water is a living entity and would be listening to the Ojibwe words for “water, we love you.”

“Everybody loud, now,” she said, “so that lovely Mississippi River down there can hear us.”

And as the voices rose, the attendance began to swell. Advocates who had been meeting with legislators in the morning streamed over from the Capitol building to the east; others who had been gathered at church across University Avenue flowed down from the north; new arrivals came from everywhere.

“Winona asked that we have jingle dancers, too,” Day said, referring to Winona LaDuke, who was standing nearby and dressed for dancing. “And when Winona asks me to do something” – long pause, big smile – “I generally try to do it.”

When the dance was done the crowd was large, and energized, and it flowed to the Capitol rotunda like a springtime flood. Maybe, I began to think, this can actually make a difference.

Legislatively speaking, Water Action Day had not started well. The Minnesota Senate had passed a bill to divert some $22 million in Legacy funds raised by the sales-tax amendment and apply it to normal government programming, rather than the above-and-beyond initiatives the money is supposed to enable.

The best that could be said was that the Senate bill wasn’t quite as bad as the House’s version, according to Steve Morse of the Minnesota Environmental Partnership. And it had passed by only a single vote, with no DFLers joining the Republicans’ unanimous yeas.

Morse’s coalition group had organized the rally, whose point was to demonstrate public support for Gov. Mark Dayton when the battle moves to the crunch phase of veto and showdown. Also, to put as many as 600 citizen lobbyists in touch with their lawmakers through a series of facilitated appointments, supported by a spot of ad hoc training. 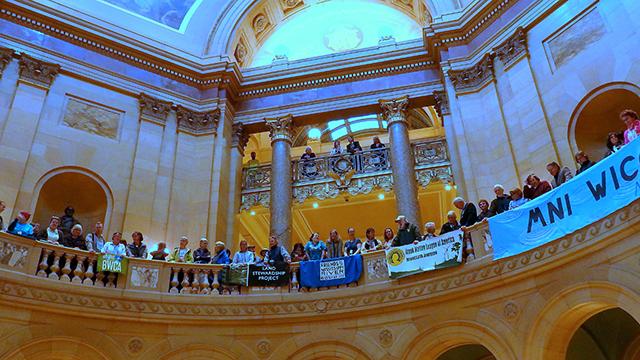 MinnPost photo by Ron Meador
I asked a Capitol security officer where I might check for an estimate of the crowd in the rotunda but came up empty.

“We tell them, you don’t need to be an expert on these issues or the fine points of the legislation,” said Whitney Clark of Friends of the Mississippi River. “You just need to ask them, if this becomes the law, will my lake be greener – or clearer? Will my walleyes be fatter – or fewer?”

About 600 people had signed up to meet with their senator or representative, he said, and of the 201 members of the Legislature, he’d been told that 199 agreed to take part. Of the other two, he wondered, “How do you do that? People are willing to come all the way to St. Paul, to drive for hours, and you just say no?”

More than 800 people had registered for the event through MEP, but there were indications that the actual attendance might be 50 percent above that. I asked a Capitol security officer where I might check for an estimate of the crowd in the rotunda but came up empty.

My unofficial estimate: really big. Overflowing on the main level, with plenty more in the corridors and on the mezzanine and corridors, including handfuls who enjoyed ignoring the signs instructing them not to sit or stand on the staircases in between.

Dayton spoke very briefly, after warmup remarks by Audrey Arner, a farmer from Montevideo, who stressed the special water-quality needs of rural communities, and the importance of protecting Minnesota’s waters from agricultural damage.

“I agree with everything Audrey just said,” the governor began. He distinguished between legislators who understand the issues and their importance, and those who don’t, and urged the attendees to be in contact with the people they’d elected.

He also mentioned his proclamation declaring Water Action Day and his announcement of a series of town meetings around the state this summer on ways to improve water quality.

Among the other speakers, the crowd pleaser by far was Winona LaDuke. She drew an extended connection between the fight over the Dakota Access Pipeline and new challenges to the Minnesota interests of Enbridge Inc., which became a key DAPL partner after abandoning the Sandpiper project. Republican legislators are now trying to help Enbridge and other pipeline companies by removing  a requirement that they prove the public need for a new pipeline before moving to property condemnation and construction.

There is a pipeline that is super old, it is called Line 3 and Enbridge says it is deteriorating. So I think they should close it down and clean it up. We tell our children, if you make a mess, you must clean it up. You do not get to make a new mess and leave the Leech Lake Reservation, the Fond du Lac Reservation and the people of Minnesota with your old mess.

Some of the placards in the Rotunda: Love Your Mother (over an image of the blue planet), Native Lives Matter, Sportsmen for the BWCA, Rural Communities Come Before Profit, I Stand With Standing Rock/Stop Dakota Access Pipeline, Minnesota, It’s Your Call: Stop Polymet, Cut Off the Head of the Black Snake, Stop Funding Cultural Genocide, Our Grandchildren Deserve Clean Water Too!

Some of the people I met at the rally agreed to say who they were, where they were from, and why they had come to the Capitol. Excerpts:

Beverly Wren, West St. Paul. I’m here because I’m concerned about all the water issues – there’s not one specific area, like the pipeline or the crop buffers, we need a really holistic approach.

Pete Otterson, Eden Prairie: I spent 34 years working for the DNR, and the last thing was working on trying to update the shoreline rules, which have buffers as an element. But they never got updated, because the governor put the kibosh on it. That was Tim Pawlenty. We put an awful lot of work into public participation, farmers and ag forums, and at the last minute he killed it.

[I asked how different that proposal was from Dayton’s.] You know, the 50-foot buffer is what we were proposing back then. And we also had the flexibility, which I think is important. If the local soil and water conservation district came up with a different approach, or the landowner came up with a different, approved management plan, then fine – just prove it will work.

Amy Donlin, White Bear Lake: Sulfide mining is my main issue right now – I’m really concerned about Lake Superior and the Boundary Waters, those watersheds and the wild rice beds, everything that would be damaged if we contaminate our water. No, I haven’t made an appointment with my legislator yet – but I have heard that some of them didn’t show up to their meetings. Disturbing.

John Helland, Edina (a retired analyst on the Minnesota House’s nonpartisan research staff): I worked on all the key environmental legislation in the 1970s and it became near and dear to my heart – ensuring that pollution was cleaned up and that we had a good natural resource foundation.

What’s happening this year is an all-out attack on environmental regulation. There has never been something as dramatic as this. I mean, under Pawlenty’s administration there were some rollbacks, certainly, but nothing as bad as this full-scale assault on the environmental laws and the foundations of Minnesota’s natural environment.

Jan Bourdon, Maplewood: I’m chapter leader of the Minnesota Wild Waters Broadband, which is a new chapter of the national organization, Great Old Broads for Wilderness. We are strong female advocates for water, for the environment, for wild places, and we don’t want to lose any of it. We have to, have to, be the best we can today and every day so we don’t lose our water.

I’ve been devastated since the election because I don’t know where our morals went, where our values went, and where our ethics are going. 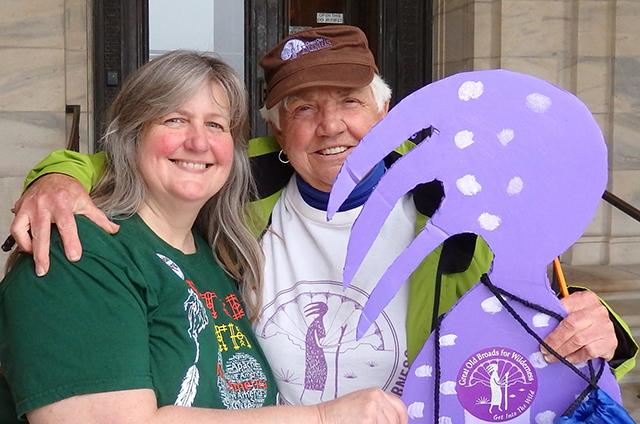 Lori Gesch, West St. Paul. I’m an old wild broad, too. I’ve never been a protester, but we’ve got to let our voices be heard so we can protect what we care about. This is an emotionally scary time and the environment shouldn’t be a partisan issue. What’s more important than drinking water? Sulfide mining in these [northern] watersheds is ridiculous.

Bruce Kuehmichel, Caledonia: I wanted to give a message to Gov. Mark Dayton, so I went to his office and I wrote on that piece of paper that you can make comments to, and I told him that the legal justification for protecting water comes from the public trust doctrine which is enshrined in our constitution. Unfortunately, it wasn’t brought forth sufficiently in the environmental legislation of the 1970s and ’80s. We need to review that, urgently.

Yes, I did meet with my representative, Greg Davids [R-Preston]. It didn’t go very well.

Accompanying Kuehmichel was Lorraine Culver, Houston: I’ve never been involved in lobbying a legislator, but I wanted to do it on these issues. The only one I spoke to was Greg Davids, and he told me that the buffer plan amounted to a taking of private property. But it isn’t.

I learned about this when I was active in the anti-frac sand issue in our area, and the takings question was part of that, and our lawyer explained that a taking happens when you lose all use of your property. But the farmers can still use the buffer land for other purposes than letting cows graze there.

But Davids just offered his own, extended definition of what a taking is. So often, we just can’t listen to each other. I’m not saying anything new there – but we just seem bent on seeing things the way we choose to see them.

On Water Action Day, a flood of citizens washes through the Minnesota Capitol