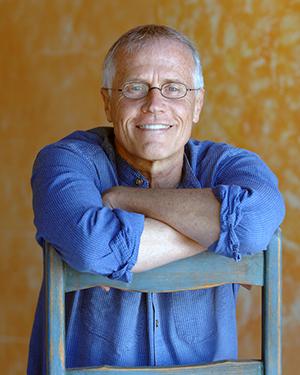 If somebody told you it is possible to reverse global warming, starting at midcentury, with a suite of currently available, economically viable solutions — no new carbon tax needed, nor a hundred more nuke plants a year — wouldn’t you want to know more?

I did, and so on Tuesday I got a copy of the new book, “Drawdown: The Most Comprehensive Plan Ever Proposed to Reverse Global Warming.”

Provocative title, and then there’s the byline: Paul Hawken, the accomplished and respected thinker/entrepreneur who has written from the crossroads of commerce and environmental responsibility for nearly 40 years.

His books “Natural Capitalism” (co-authored with Amory Lovins)  and “The Ecology of Commerce” inspired important change in certain business and policy sectors. “Blessed Unrest” made a persuasive case that truly sweeping change can be a bottom-up enterprise of small players loosely joined, succeeding with or without the blessing of governments and corporations.

Hawken acknowledges that his superlative claim for “Drawdown” might be considered brash, then justifies it:

In 2001 I began asking experts in climate and environmental fields a question: Do we know what we need to do in order to arrest and reverse global warming? I thought they could provide a shopping list. I wanted to know the most effective solutions that were already in place, and the impact they could have if scaled. I also wanted to know the price tag.

My contacts replied that such an inventory did not exist, but all agreed it would be a great checklist to have, though creating one was not within their individual expertise. After several years, I stopped asking because it was not within my expertise either.

It was still outside his expertise in 2013, when increasingly dire climate headlines of the “game over” theme moved him to launch the Drawdown project, which would eventually engage more than 200 climate scientists, engineers, economists, public-policy analysts and other experts in scribbling one highly strategic shopping list of 80 workable, compatible solutions.

No pipe dreams here. No celestial pies. No necessity to sharply lower living standards. Above all, no reliance on a massive shift of government policy or surge of multinational cooperation of the kind we used to hope might drastically cut greenhouse gas emissions.

Indeed, a key appeal of the Drawdown strategy is that it assumes no breakthrough in reducing industrial emissions via government dictate. Instead, it emphasizes voluntary reductions for which there is already a strong business case, and — more importantly, more creatively — on ways to pull emissions back out of the atmosphere.

There is money to be made in most of these 80 endeavors (family planning is an exception). There are new jobs to be filled. Many bring ancillary enhancements to the quality of life on the only planet we’ve got.

Absent from the list are giant, gazillion-dollar air-filtration facilities to strip carbon from the air by force, and sky blankets of reflective aerosols that could cool the climate to the point of disaster.

Using moderate projections on the pace of possible adoption, and conservative calculations of atmospheric impact, the Drawdown experts conclude that levels of CO2 can be made to decline starting in 2050 or so — a little later if efforts lag, a little faster if they accelerate.

They resist organizing them into a master plan, because the point is not to prescribe an overall fix  — only to demonstrate that one is possible, and practical.

80 items in the toolbox

It is difficult to summarize the 80 options on the Drawdown list, but a look at the top 10 — ranked high to low by potential to reduce atmospheric CO2 — will give you a sense of the range the Hawken team endorsed: 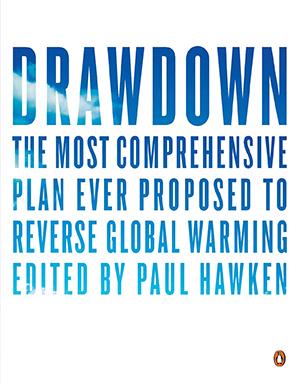 Some of the other 70 are less familiar but fascinating examples of what innovators around the world are already doing with geothermal, in-stream hydro and tidal power; improved rice cultivation and regenerative agricultural practices that restore land while raising crops; advanced composting and irrigation practices; fitting out buildings with smart glass, heat pumps, green roofs and “alternative cement.”

And when I wrote a moment ago about the exclusion of gazillion-dollar carbon-stripping air-filtration plants, they’re in the book, too — but on a second list of 20 “coming attractions” that right now fall on the far side of current practicality and/or robust data as to performance potential and cost. But, down the road a bit, who knows?

Also in this set: driverless cars and smart highways; microbial farming, marine permaculture and industrial hemp; solid-state wave energy, hydrogen-boron fusion and the power-producing artificial leaf. Also, the obscurely labeled “enhanced weathering of materials,” which takes  crushed silicate rock from mine tailings and spreads it on land or adds it to surface water to absorb CO2 from the air.

Greeted with murmurs so far

I think “Drawdown” is an important book and deserves to be an influential one, but as yet it has attracted strikingly little notice in the mainstream press — or in specialty publications devoted to environmental subjects — since its publication April 17.

Though I wade daily in coverage of global warming and climate change, I first learned that “Drawdown” was out when my friend Jim Davis pointed out a piece about it in Tricycle, a Buddhist journal that is maybe not the first place we expect to find news like this.

Tricycle’s Q&A with Hawken includes a question about whether “Drawdown” is a strategic effort to motivate people with a message of hope rather than one more warning of doom. A fair Q that produced a provocative A, excerpted here:

The implication of the news is you’re causing global warming — it’s your car, your house, the way you eat, the way you travel, and what you buy. So people feel guilt or shame inside. They may not even acknowledge it, but it’s often there. When you mix fear and doom with guilt and shame, you get apathy. That’s Psych 101.

People who are literate in the science may feel disempowered or think that what they do to address the issue is meaningless in terms of making an impact. That is because we are focusing on what “you” can do. We can instead focus on what “we” can and are doing.

If you Google the top ten solutions to climate change — which I recommend you do — you get phrases like “forego fossil fuel,” “upgrade the infrastructure,” “move closer to work,” “consume less,” “be efficient,” “eat smart,” and “stop cutting down trees.” These aren’t solutions; these are proverbs. You can’t argue with proverbs.  But they don’t necessarily give you hope.

On the other hand, our approach was not about engendering hope. From my point of view — which, I suppose, is informed by Buddhism — hope is the pretty mask of fear.

You can’t have hope without fear, whether you’re aware of it or it’s subconscious. What we need to be is fearless, not hopeful, because to be hopeful means that our actions are based on fear. No action based on fear — except running away from a bear — has a good outcome. In fact, you shouldn’t run away from a black bear; you should stand tall.

The anchor of apathy

In the course of 20-some years of investigating and writing about global warming I’ve become all too familiar with that dynamic of gloom/doom/shame/fear/apathy, and I think Hawken has put his finger on exactly why we haven’t made more policy progress.

The biggest anchor dragging behind this boat isn’t climate denial or even indifference but, I suspect, the almost unspeakably deep, defeatist conviction that no response really matters because we are already so thoroughly screwed. I’m vulnerable to that despair at times and maybe you are, too.

If so, read this book — not just as an antidote to fear and despair but as foundation for understanding and supporting the kinds of change that really could be coming, and at every scale from your household to your company, your community, your county and state and national government.

As for hope … well, with or without fear, it usually shows up for me as attachment to some outcome I can’t control. Buddhists believe it’s important to do the right thing for its own sake, without being invested in a particular result — but doing the right thing, and seeing others doing the same, can maybe lead to something like optimism.

We can all stand more of that.

Can global warming really be reversed? Maybe so, and Paul Hawken shows how