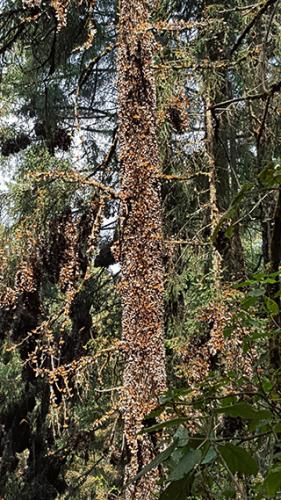 Photo by Steve Hilburger, USGS
A group of monarch butterflies covers an oyamel fir
tree at an overwintering site in the Piedra Herrada
Monarch Butterfly Sanctuary in Mexico.

All over Minnesota and beyond, citizens and clubs and the occasional municipality are planting milkweed in hopes of helping the monarch butterfly reverse its ongoing population crash.

Still, the losses continue. This gorgeous, iconic creature’s numbers have declined by probably 80 percent in the last decade, and it may face 50-50 odds of disappearing from the Midwestern landscape in the next two.

The prospect has already moved the governments of the United States, Mexico and Canada to join in a preservation plan that includes better protecting the monarchs’ overwintering grounds in Mexico and promoting healthier habitat in their summer breeding range. Protection under the Endangered Species Act may be ahead.

But ultimately recovery will require massive restoration of milkweed plants of the Asclepia family — an important food source for monarchs at all ages, and an absolute necessity during the transformation from egg to larval stage — that have been lost primarily to herbicide-intensive agricultural practice.

How massive? According to a new analysis from the U.S. Geological Survey, 1.8 billion new milkweed stems are needed to reverse losses in the monarch’s North Central range.

By my very rough calculation, it amounts to 73 milkweed stems for each and every household in the target breeding range, which includes Minnesota, Wisconsin, Iowa, Michigan, Illinois, Indiana and Ohio, along with parts of Kansas, Nebraska, South Dakota, North Dakota and Missouri.

Rough calculations are a hallmark, even a necessity, of discussions about saving the Midwestern monarch, the basic problem being that they are tough to count. So tough that the standard population measure is not number of butterflies but hectares of overwintering grounds in the high-elevation Oyamel fir forests of central Mexico.

That amounts to about 7.2 acres, equivalent to about eight football fields without the end zones. The goal of the U.S.-Canada-Mexico collaboration is to more than double that, to six hectares, as a foundation of sustainable population health.

Monarchs overwinter in huge numbers, presenting researchers with a few choices for their census-taking. None is terribly ideal.

The USGS analysis considered the results of six census efforts, made some statistical adjustments and concluded that the best population estimate for overwintering monarchs was 21.1 million per hectare.

That’s below the midpoint of the studies’ range, which ran from 6.9 million to 60.9 million per hectare. It’s also below the 37.5 million used by the Pollinator Task Force in 2015, whose work informed the White House goal of six hectares (thus, 225 million monarchs) by 2020.

USGS now figures a reasonable 6-hectare population would be only 127 million butterflies. That leads to a big reduction in milkweed-restoration need, since each individual monarch is assumed to require 28.5 stems to maintain the health and reserves required for the flight south.

Still, it translates to a need for 3.62 billion stems to support a population restored to health. And we have only about half that on the land.

Roundup and its collateral damage

Until recently, of course, the Midwestern landscape had all the milkweed the monarchs could use and more. This was before Roundup and genetically modified crops.

Asclepias weren’t necessarily lovely plants, but neither were they obnoxious, and their steady eradication has not been undertaken in a deliberate or purposeful way. Collateral damage is more like it, the consequence of farming practices that make corn and soybean production easier for the producer.

Development of the sweepingly efficient herbicide glyphosate, aka Roundup, and of corn and soybean varieties genetically engineered to withstand it, has changed herbicide application from tightly targeted to widely dispersed, with essentially one poison killing pretty much any weed while the crops keep growing.

This in turn has changed the Midwestern landscape to one in which milkweed no longer coexists with crops — and this matters a lot because a milkweed stem in cropland, for reasons that are not fully understood, produces almost four times as many monarch eggs as a milkweed in, say, a residential garden.

As chief author Wayne E. Throgmartin of the USGS office in La Crosse, Wisconsin, said in announcing the findings,

Reasons for monarch population declines are complex, although some evidence suggests that loss of breeding habitat is a primary factor. Other factors include adverse weather conditions in recent years, loss of overwintering habitat, disease and exposure to contaminants.

Mexico has already made progress on protecting the overwintering habitat, which after all doesn’t amount to that much land. Factors of weather and disease are beyond human influence, as are many contaminants. (An exception would be pesticides, which we could control more wisely if we chose.)

That leaves conservation and restoration of milkweed across the monarchs’ summer breeding habitat as the best available response, but still quite a difficult one.

The USGS analysis draws on paper published last September by John Pleasants of the University of Iowa, which I excerpt here because of its crisp analysis of how much milkweed has been lost, and why.

Of the estimated 2.2 billion milkweeds present on the landscape in the Midwest in 1999, only 1.34 billion remained in 2014, a decline of almost 40%. But because each milkweed stem in an agricultural ﬁeld averages 3.9 times more monarch eggs than a milkweed stem in non-agricultural habitats, the potential monarch support capacity loss has been 71%.

A conservation goal of 6 hectares of overwintering butterﬂies has been proposed. It is estimated that the current milkweed population could support about 3.2 hectares under average weather conditions in the breeding season.

A total of 425 million milkweeds would need to be added to increase the monarch support capacity by just one more overwintering hectare…. Thus, a massive milkweed restoration effort will be needed to produce a resilient monarch population.

Absent milkweed restoration, the moncarch’s outlook is not likely to improve. In a paper published in March, a team that included Throgmartin and Pleasants reviewed various contributors to the monarch population’s decline and instability, concluding that

The USGS study estimating monarch population size and milkweed restoration needs can be read here, and the service’s announcement of its findings is here. The Pleasants paper estimating Midwestern milkweed losses is here and the analysis of extinction risk is here. All can be read without charge.

How much milkweed to save monarch? Only 1.8 billion new stems, study finds