Earlier this month I made a sort of pilgrimage to a gorge in western New York that I’ve remembered for more than 50 years with piercing clarity, though the particulars seemed as implausible as they were indelible.

I lived in this region till the age of 10, but ventured only infrequently into its terrain. My parents were devotees of the great indoors, and we tended to leave our neighborhood in the Buffalo suburbs only for obligatory road trips to their own hometowns in Pennsylvania and West Virginia.

Niagara was one of two notable exceptions, not just the famous falls but the gorge and the river upstream; also the state park on Grand Island, where we went for picnics and I learned to swim in water that would soon be spinning the hydroelectric turbines.

All of this was so near — the distance from our driveway to the Rainbow Bridge was about the same as from Rosedale to downtown Stillwater — and we went so often that I grew jaded about this great natural wonder, focusing instead on tallying out-of-state plates in the sprawl of parked cars.

The other exception was the Genesee River gorge at Letchworth State Park, which we visited but once.

I was 8 years old, probably, and remember two things only: the sea of autumn foliage glowing all around us, our heads at treetop level, and the whitewater rush of a great river 24 stories below my feet, which were frozen in fear to the wooden ties of a working railroad bridge.

Now you might ask yourself, as I have over the decades:

A working railroad bridge in a state park? Open to visitors? Without some kind of surfacing over the gaps between the ties? What kind of parent takes an acrophobic 8-year-old boy out on the ties, along with his younger sister? And what would they do if a train came along?

All good questions. So good, in fact, that they led me to discount the whole recollection until this month’s return visit, which confirmed the kid’s memory in pretty much every detail.

The bridge is known officially as the Portage Viaduct and it was built in 1875 to replace the longest and tallest wooden bridge in the world, which had just burned. The framing is of iron and steel, 820 feet long and 245 feet tall at its highest point above the river. It went up up in less than two months’ time.

It is a single-track bridge that still carries rail traffic, just like the one in the movie “Stand By Me,” which four boys are crossing when a train approaches and they discover just how limited their options have become.

(Indeed, the Portage Viaduct is often thought to have been the movie bridge, but in fact it was a much more modern span over California’s Lake Britton, just outside a state park near Redding.) 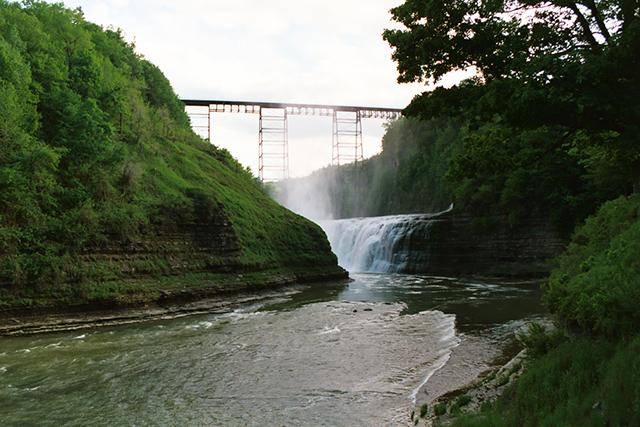 CC/Wikimedia/Andreas F. Borchert
The bridge is known officially as the Portage Viaduct

My parents were cautious people, to say the least, and so I have to think they knew we weren’t in danger going out on the bridge. I think I can recall my dad, something of a  railroad buff, explaining that we would hear and feel an approaching train in plenty of time to get back onto solid ground.

As for the kid’s fear of heights — a defining feature of my childhood that still recurs from time to time — none of the embarrassing incidents I can recall occurred before this trip. So maybe Letchworth is where it all began.

As we drove to the park this month I was undecided whether I’d try to walk the bridge again, but as it turned out the choice had been made for us: The Portage Viaduct is being prepared for demolition, with a new concrete span scheduled to be in place next year, and the trails to it are not only fenced off but patrolled by work crews.

This was not entirely heartbreaking to me, I will admit, and even less so to Sallie as we admired the creaky-looking ironwork from so far, far below.

There was talk in the park that there may still be efforts to preserve the old span — maybe convert it to a rail trail, as is being done with the Lake Britton bridge — but the official position is that the park system doesn’t have the money for that, even if it had the interest in Norfolk Southern’s offer to donate it as an observation platform.

The new bridge reportedly will be equipped with automatic gates to keep pedestrians from venturing onto it, but I don’t envy the railroad its challenge in depriving Letchworth visitors of a platform for aerial observation of a gorge that is called, without irony, the Grand Canyon of the East.

In Arizona, it might rank as a pleasant little ravine feeding into the real Grand Canyon, but in fact the Genesee gorge is pretty spectacular — surely the main reason Letchworth ranked first in a 2015 USA Today poll of readers’ favorite state parks.

Part of the same Niagara Escarpment that created those other falls north of Buffalo, the gorge at Letchworth is 600 feet deep in places, carved by the Genesee on its way to Lake Ontario at Rochester.

There are three large waterfalls in it and supposedly 60-some others on tributary streams, but we spent our half-day entirely at the main gorge without losing interest. The walls are shale, limestone and sandstone, with interesting seeps and vegetation, and their color shifts with the changing sky overhead, more subtly than Grand Canyon though also, of course, over a narrower spectrum.

The forest in the gorge is both dense and tall, and I was thrilled to see a profusion of huge, short-needled, fragrant conifers that looked exactly like eastern hemlocks (which, when we consulted a ranger, they turned out to be).

Exceedingly rare in Minnesota and many other places, thanks to overharvesting, they are thriving in Letchworth despite an infestation of the woolly adelgids that are decimating the stands that survive across the eastern U.S.

Driving back to the family cottage on Lake Chautauqua where Sallie spent many of her youthful summers, and that she and her siblings now share, I tried to decide if this portion of western New York is especially pleasant by objective standards or if it just seems that way because of our personal histories there.

It’s not a landscape I think about much between visits, but once we’re in the rolling countryside east of Lake Erie, approaching the low mountains at the edge of the Alleghenies, on two-lane highways connecting old farms and small towns, I feel as if I’ve traveled in time as well as space. Things are slower, gentler, quieter.

Then other memories start to come. Of going down through Olean on the way to visit my mother’s family at Bradford. Of stopping for gas at Bemus Point, or was it Mayville,  at a one-pump filling station with a freezer chest of ice cream sandwiches and a signboard penguin advertising cigarettes.

Nearing Westfield, home of the Welch’s brand, I recall pressing my nose to the rear window of our family car to gape at the grapevines — every square inch of side yard and vacant field, it seemed, given over to row upon row of Concords running to the horizon. And it’s still that way, pretty much.

A sign for the Allegheny Reservoir, completed in my lifetime, brings up a boyhood poaching incident with my cousins who continued to fish certain favorite ponds or maybe lakes that had now been absorbed into the water project and placed off limits to residents, not that my relatives paid any mind. We had a nice stringer of bass, which we managed to hide in the weeds just as the game warden drove up.

Also, the day my family picnicked at the shoreline with all the aunts, uncles and cousins, who watched my mom peel down to her underwear, stride past the No Swimming sign, and dive into the favorite skinny-dipping spot of her own youth.

My grandmother’s face reappeared to me with the signs stating the mileage to the little towns of Ripley and North East, places she lived out her widowhood.

Sometimes it seems that geography is not just the subject matter of memory,  but might also serve as a sort of an external, physical index, a set of keys linking places on the land to places in the mind and also in time. But to access them, you have to get out of your head and go.

Letter from Letchworth State Park: The bridge over ‘Grand Canyon of the East’