Heading for the Stillwater Lift Bridge on Wednesday morning, my neighbor Nancy and I listed things we would not miss after its closure — the rush-hour traffic jams, the periodic weeks of downtime for inspections and repairs, the occasional sudden shutdown for a stuck truck or equipment glitch ….

We were en route to the dedication ceremony for the beautiful, brand-new new bridge and Nancy was driving, so I had a rare chance coming down that long hill on the Wisconsin side to gaze at a lovely river and the charming old city climbing away from it, without having to steer.

This, I realized, is a windshield vista I have loved for a long time and will surely miss forever.

The St. Croix Crossing, formerly known as the new Stillwater bridge, has been ranked by some as the most expensive single bridge project in U.S. history, with an official price tag of $646 million. And the result is impressive, a gleaming white melding of concrete box girders and steel suspension stays said to be only the second of its type in the country.

But getting it built proved to be an unexpectedly complex and protracted problem, given the age and supposedly failing health of the 1931 lift bridge. It is a struggle I have been covering with rising skepticism for nearly 20 years, starting with editorials for the Star Tribune when I resided in southwest Minneapolis.

Now I live maybe six miles east of the bridge, in Wisconsin. When I moved here in 2008, many who liked to argue bridge issues assumed I would move into the proponents’ camp because replacement would shorten my commute, raise my property’s value, and so on.

But it hasn’t worked out that way.

Instead, my intimate and often daily experience of the lift bridge only  deepened my sense that its inconvenience factors and structural decline, while not negligible, have long been exaggerated to sell a new bridge, any bridge, ASAP.

My love of the valley deepened, too, and with it a hope that the inevitable and necessary new bridge might be sensibly lower, slimmer and slower than the four-lane, high-speed, blufftop-to-blufftop span perpetually pushed by highway engineers, who pretty much always get their way.

Still, as I waited for the ribbon-cutting with many hundreds of others, it was possible to appreciate the St. Croix Crossing for its own sake, without a twinge of rancor.

It is indeed a beautiful structure, sleek and simple, both from pavement level and, as Sallie and I discovered on Sunday via kayaks, from river level as well. It surely will be a pleasure to cross by car, bicycle or foot, up there in the treetops.

Its breathtaking cost — not just for the span but the associated acres of roadway, ramps, roundabouts and land reshaping, plus environmental mitigation and impact aid to adjacent communities — represent a major infrastructure investment of the kind this country needs to make more often, and by extension a lot of business investment and payroll.

And, at long last, it is done.

A sense of relieved accomplishment seemed to define the public mood at the dedication, which was happy but not boisterous, just as it dominated the remarks of officialdom: the Minnesota and Wisconsin governors, a local officeholder from each end of the crossing, and two Wisconsin members of the U.S. House.

The emcee was Mayor Mary McComber, who once or twice corrected references to “the new Stillwater bridge” by pointing out that its western end is in her city of Oak Park Heights.

She spoke of the dozens of homes there that were razed for the project. And she thanked the whole citizenry for “their patience, their tolerance and their endurance above all” during a construction process in which “the landscape has changed tremendously — creating a new normal” for citizens and businesses that will require some adjustment time.

Her Wisconsin counterpart, Tom Spaniol, chair of the board that oversees my home township of St. Joseph, surmised that many in the crowd still knew little of what they would soon encounter  motoring eastward over the bridge: “wide open vistas, rolling hills, cornfields and old farmhouses … with the first stoplight six miles away.” 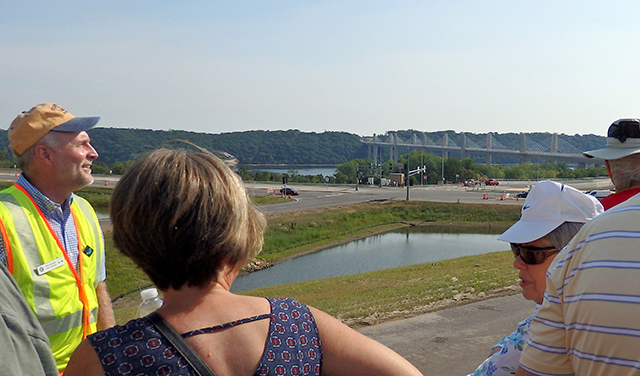 MinnPost photo by Ron Meador
Spectators viewed the opening of the St. Croix Crossing on Wednesday.

That is going to change, of course. Nobody disputes that the bridge will bring urban sprawl to communities on the Wisconsin side; the questions are whether the most dire sprawl forecasts will come to pass, and how soon, and how effectively the growth can be guided by local leaders like Spaniol.

Both Minnesota’s Gov. Mark Dayton and Wisconsin’s U.S. Rep. Ron Kind noted that hassles over the bridge replacement were the subject of their very first official meeting on arriving in Washington (Dayton for his U.S. Senate term in 2001, Kind in 1997).

Dayton drew a laugh by observing that the issue had persisted into the next millennium, and seemed likely at times to linger into the millennium beyond that.

But it didn’t, chiefly because Dayton and Wisconsin Gov. Scott Walker, both of whom had opposed the project, decided to change course — in Dayton’s case, on what seemed to many a whim after touring the old bridge with former U.S. Rep. Michele Bachmann.

With that backing, Sen. Amy Klobuchar (who couldn’t attend the ceremony, but sent a letter) was able to carve an exception for the bridge into federal law that protects the St. Croix, a designated scenic riverway managed by the National Park Service, from such encroachments.

As the officials congratulated each other and an ever-growing list of people who made it all possible — from construction workers to lobbyists to participants in a long stakeholder mediation — the mood in the crowd seemed to be: We can still build things in this country. We can still get things done.

And I admit I found it impossible not to share in that sentiment, too.

There were no visible protesters at the dedication, nor did I hear anybody utter a critical word about the project during the few hours I spent at the bridge.

Dayton and others referenced controversy only briefly and obliquely, without a hint as to what the opponents had actually opposed. (Nor, come to think of it, did they thank the critics for essentially forcing the stakeholder consultation that every speaker agreed produced such a wonderful final result, by making the case for design changes and mitigation measures that left it  a little kinder to the valley.)

My congressman, Sean Duffy, approached his turn at the podium as a stand-up comedy gig and, as an illustration of the lift bridge’s supposed decrepitude, said he had toured it with Klobuchar “and we were picking up screws!” If so, they probably weren’t bridge parts. Bolts, perhaps?

Some still seem to believe that the project’s only foes were doctrinaire environmentalists opposed to any new bridge alongside the aging one that was going to fail sooner or later. In fact, there was a sizable campaign against the project from the taxpayer watchdog groups that target large federal outlays for narrowly local benefits (an agenda Michele Bachmann often shared when the dough was going to someone else’s district).

And with the possible exception of an irrational activist here or there whom I’ve forgotten, the environmentalist objection was not to replacement per se, which all agreed would be needed someday, and somewhere other than the lift bridge’s location.

But, they said, let’s not duplicate the I-94 crossing six miles to the south, needlessly accelerating sprawl into the landscape so lovingly described yesterday by Tom Spaniol. Instead, they called for a smaller, slimmer, lower and slower-speed bridge that would serve all of the transportation functions of the existing bridge while fitting better into the valley landscape and costing a whole lot less.

The new bridge was still a construction site as we assembled on its approach ramp for the dedication ceremony; its opening time wasn’t known until Dayton, prodded by McComber, announced from the podium it would be 8 p.m. There being no parking on its roadways, we traveled to the ramp on school buses running shuttle service from various large parking lots around Stillwater.

This actually turned out to be handy for a notoriously poor crowd estimator like myself, standing in a sea of people, with no opportunity to climb to a higher vantage point. I can report that the crowd was about six lanes wide and about seven buses deep. In other words, a whole lot of people.

Movable concrete barriers separated what would become the Minnesota-bound lanes from the Wisconsin-bound, and with a half-hour to go before the program commenced, some of us noticed school buses crossing the unopened bridge from the east. I mentioned that shuttles were coming from Somerset, too, and maybe New Richmond or other places in Wisconsin.

“Figures,” said a white-haired fellow with three cameras around this neck. “Minnesota pays most of the cost of this bridge, and Wisconsinites get to jump the gun.”

But a pleasant surprise awaited us Minnesota shuttlers on the return trip. Instead of turning around on the bridge approach, as they had after dropping us off, the drivers now took us all the way across the bridge to a turnaround in St. Joseph, then back across to our cars.

We rode like schoolchildren as the vehicle gathered speed, half-standing and swaying, pressing to the glass as the bridge’s white webbing flew past, the shining St. Croix so far beneath us.

It was a terrific aerial view and for a moment I tried to transplant a recollected image of a street-level, two-lane alternative design into the valley below, but all of those memories were out of mind now.

A new bridge opens over the St. Croix, and even a skeptic finds it beautiful