To follow the news of earth-science discoveries is to be continually impressed with how much we don’t yet know about this planet.

Today’s case in point: A discovery that the world’s most concentrated region of volcanoes apparently underlies the ice of West Antarctica, which seems likely to have nearly three times as many as previously thought.

If this makes you think of the West Antarctic ice sheet, whose continued disintegration is raising serious concerns about sea-level rise, you are right on target. And, yes, it appears possible that volcanic activity could steeply accelerate the ice sheet’s disintegration, and perhaps quite suddenly.

But that’s getting ahead of a science story which is among the most intriguing I’ve read this year, not least because of the research’s unusual origin – as the whim of an undergraduate with a thing for volcanoes.

His name is Maximillian Van Wyk De Vries and he is a third-year student in the University of Edinburgh’s School of GeoSciences. According to a story in The Scotsman on Sunday, Van Wyck De Vries explained the genesis of his project this way:

Antarctica remains among the least studied areas of the globe, and as a young scientist I was excited to learn about something new and not well understood. After examining existing data on West Antarctica, I began discovering traces of volcanism. Naturally I looked into it further, which led to this discovery of almost 100 volcanoes under the ice sheet.

Simple as that, really – he got curious, took a look, and in one stroke nearly tripled the count of Antarctic volcanoes from 47 to 138.

And his paper, published in a journal of The Geological Society of London, is remarkably readable and understandable even for a geology dunce like yours truly, who tends to struggle with the science of mantle and magma and tectonic drift. Perhaps that’s because, as a mere college junior, Van Wyk De Vries has not yet learned to write like your typical Ph.D.

What’s under that ice

West Antarctica, he explains, “hosts one of the most extensive regions of stretched continental crust on Earth.” That stretching creates a terrain he compares to the basin and range portion of the American West, where mountain ranges pulled apart to leave wide, flat plains on the new surface between them.

But a more apt comparison, volcanically speaking, is the East African Rift System around Kilimanjaro, which until now has been considered the world’s densest concentration of volcanoes, some of them active. Its numbers are dwarfed by the Antarctic’s.

Most of Antarctica’s previously identified volcanic peaks were found by conventional surface exploration; they rose high enough to pierce or at least closely approach the top of the continent’s permanent ice cover, which in the western region reaches thicknesses of a mile or even two. 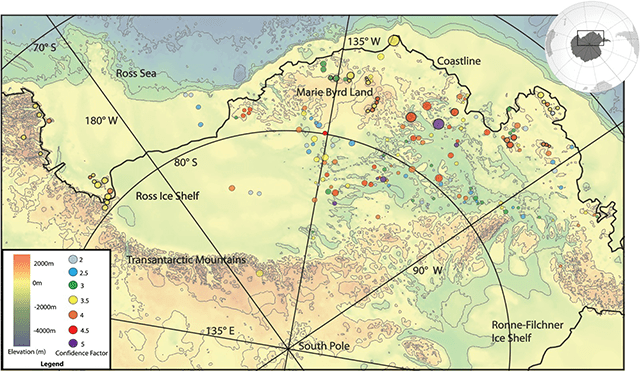 But Van Wyk De Vries reasoned that an examination of radar data gathered from aircraft, and collected by the British Antarctic Survey, might allow him to peer beneath the surface for the basalt cones and other formations that mark the presence of volcanoes. Likely looking cones could be checked against databases compiled from satellite observations and other sources.

Working with a team that included his professors, he used a set of five criteria to rate a cone as a probable or improbable volcano – the right ratio of height to base width, the presence of telltale anomalies in magnetic or gravitational fields, and a couple of others I could quote but can’t explain.

A cone got one point for each criterion it met, and the result was a confidence ranking from 0 (no volcano here) to 5 (almost certainly a volcano). More than three-fourths of the cones considered scored above a 3, enough for Van Wyck De Vries and colleagues to “consider it reasonable to interpret these 138 cones henceforth as subglacial volcanoes.”

We note that 98% of the 47 previously identiﬁed volcanoes in West Antarctica achieved a conﬁdence score greater than 3.

For comparison, the overall volcanic ediﬁce concentration along the East African Rift is roughly one volcano per 7,200 km2,  rising to one volcano per 2,000 km2 in the densest regions. (footnotes omitted)

By the way, this use of “morphometry” from radar and satellite data has been widely used on the Earth’s surface, on the ocean floor and even in the study of other planets’ surfaces. But, the paper says, “to our knowledge, our study here is the first to use morphometry to identify volcanic edifices on the continental scale beneath Antarctica.”

(And if anybody begs to differ, I haven’t seen their objection turn up in the considerable buzz the paper has generated this week.)

But what does it mean?

And now we return to the discovery’s significance to the fate of a planet with a warming climate and rising seas, which depends mostly on the level of volcanic activity beneath the ice.

The paper does not offer predictions on that point, noting that current and past levels of activity in the West Antarctic Rift System, or WARS, have been “the subject of a long-standing debate, with one side advocating a largely inactive rift and others suggesting large-scale volcanism.” Excerpts:

The arguments in favor of an inactive rift are based on the anomalously low elevation of the WARS compared to other active continental rifts and the relative absence of basalt pebbles recovered from boreholes. Conversely, high regional heat fluxes, geomagnetic anomalies and evidence of recent subglacial volcanism suggest the rift is currently active.

The largely uneroded nature of the cones suggests that many may be of Pleistocene age or younger, which supports the argument that the rift remains active today.

In the Pine Island Glacier catchment, strong radar-sounded and glacial reflectors have been interpreted as evidence of a local eruption that occurred approximately 2,000-2,400 years ago, while, on the opposite rift flank in the Transantarctic Mountains, Mount Erebus comprises a known active volcano located above another potential volcanic hotspot.

The paper suggests it is unlikely that volcanic activity has had much to do with the ice sheet’s current retreat, but concludes that it could be a factor in the future by causing the ice to melt at its base and lubricating its slide toward the sea.

And it notes that continued thinning of the ice cover, as a consequence of global warming, could stimulate volcanic eruption by reducing pressure on the rocky crust that’s holding all that molten rock in the ground – a process already observed in Iceland and elsewhere.

Van Wyck De Vries’ full paper, “A new volcanic province: an inventory of subglacial volcanoes in West Antarctica,” can be found here and read without charge.