If 2017 seemed to you like an unusually awful year for weather and climate catastrophe, your perspective is right on — it was a record-setter, and not just because of hurricanes Harvey, Maria and Irma. Or the wildfires in California.

One of the contributors, in fact, occurred in Minnesota — the hail and high winds of early June that were especially intense in the Twin Cities metro, and are credited with causing losses in the range of $2.4 billion.

These findings are freshly issued by the National Oceanic and Atmospheric Administration (NOAA), which since 1980 has been keeping tabs on the tier of weather and climate disasters that cause losses exceeding a billion bucks.

Over that period there have been, on average, 5.8 events per year of that magnitude. Last year the tally was 16 — only the second time in 37 years that the count has gone that high.

And comparing frequencies from year to year probably understates the enormity of 2017, NOAA says, because its method treats big wildfires as single incidents. Meaning the fires across California, Montana, Idaho and other parts of the West last year are lumped together as an $18 billion event. 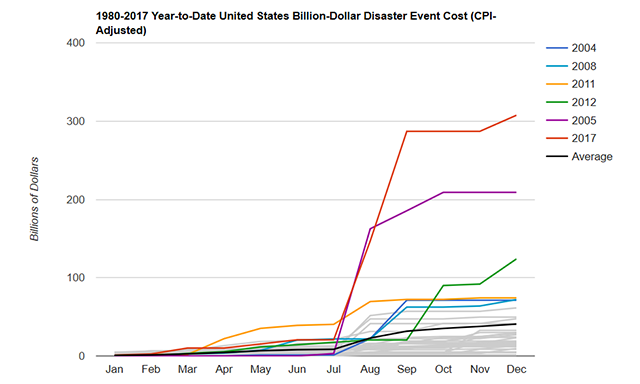 NOAA
Total losses last year were a stunning $306.2 billion, far and away a record for the past 27 years.

Better, perhaps, to look at the total losses last year — a stunning $306.2 billion, far and away a record for the past 37 years. Moreover:

Category 4 hurricanes were still the big-ticket items last year. Their combined losses exceeded a quarter-trillion dollars, with 251 fatalities: Harvey at $125 billion and 89 deaths, Maria at $90 billion and 65 deaths, Irma at $50 billion and 97 deaths. (There is wide agreement that the death count attributed to Maria in Puerto Rico is impossibly small and may soar by many hundreds with more comprehensive reporting.)

Summer-Fall 2017: A historic firestorm damages or destroys over 15,000 homes, businesses and other structures across California in October. The combined destruction of the Tubbs, Atlas, Nuns and Redwood Valley wildfires represent the most costly wildfire event on record, also causing 44 deaths. Extreme wildfire conditions in early December also burned hundreds of homes in Los Angeles. Numerous other wildfires across many western and northwestern states burn over 9.8 million acres exceeding the 10-year annual average of 6.5 million acres. Montana in particular was affected by wildfires that burned in excess of 1 million acres. These wildfire conditions were enhanced by the preceding drought conditions in several states. Total Estimated Costs: $18.0 Billion; 54 Deaths

Of course, the fires and their casading consequences are proving to be not only a multistate but a multiyear event; NOAA’s report came out just before the Montecito mudslides that have taken at least 20 lives.

The hailstorm and high winds that afflicted the Twin Cities metro area and surrounding regions from June 9 to  June 11 are described this way in the NOAA report:

Severe hail and high winds cause considerable damage across Minnesota and Wisconsin. The Minneapolis metro area in particular was damaged from large, destructive hail impacting many buildings and vehicles. This damage is comparable to the May 15, 1998 Minnesota hail storm that was also very costly. Total Estimated Costs: $2.4 Billion; 0 Deaths.

In addition, Minnesota turns up on the 2017 list as among the states afflicted by a $2.2 billion outbreak of tornadoes from March 6 to March 8, which caused damage from Arkansas to New York.

Minnesota in the record

I got curious about Minnesota’s appearance in NOAA’s big-ticket tally and found a searchable database, in which the state has figured in billion-dollar regional losses many times over the last 37 years:

But no hurricanes or tropical storms, so far.

It’s worth noting that NOAA’s approach to gathering disaster-loss data — always a difficult task, but especially when the damage is recent — draws on a wide range of sources, then processes the raw numbers in ways that have undergone substantial peer review.

Also, that the inflation adjustment works forwards, not backwards, and both the original and adjusted figures are presented. This means that an event like the epic Red River flooding of 1997, which inundated Grand Forks and Fargo, is listed as having caused losses at the time of $3.7 billion, the equivalent of $5.7 billion today.

This addresses and perhaps even anticipates the objections of some who wish to downplay climate change as an intensifier of flooding, hurricanes and other events, arguing that the rising cost of climate-driven property damage can be written off in part to simple price increases.

NOAA doesn’t promote, say, a $900 million loss to the billions list retroactively; the Red River floods gained their place on the list because of the loss valuation at the time. However, the inflation adjustment does allow a fair comparison of the 1997 disaster to later flood events.

By NOAA numbers, last year was worst for U.S. weather disasters since 1980