In no particular hurry, the National Park Service has finished working through its options for addressing the gray wolf’s pending extinction on Isle Royale.

And to no one’s surprise, its final analysis and preferred response — transplanting new, wild wolves — are fundamentally unchanged from the draft form laid out 15 months ago.

Starting this autumn, NPS announced on Friday, it plans to gather 20 to 30 wolves in the Great Lakes region and move them to the island over a period of two to three years, perhaps going to five years and more wolves if the first arrivals fail to form a viable and effectively predatory population.

Wolves will be chosen for general health and genetic diversity, hopefully in locations ecologically matched to the island archipelago.

It would be great to get wolves that are already hunting moose and know how to take down a 1,500-pound bull, as control of this forest-wrecking herd is a main reason for the wolves’ restoration. Inconveniently, Midwestern moose are in decline across most of their historic range; Isle Royale, at its southern edge, is an exception.

Some wolves would be collected in packs, which would ideally contain both adults and pups; others could be taken individually. They might be captured with padded foot traps, or “net guns” fired from helicopters, or tranquilizer darts. They would be detained as briefly as possible before being sedated and taken to the island by chopper, plane or boat.

“Hard release” would follow, with the wolves simply turned loose in their new home, a few moose carcasses having been laid out in welcome. A “soft release” option of short-term confinement in holding pens, either on the island or before transport, for testing and health checks was rejected because it could stress the captives unnecessarily, and also make them less wary of human contact.

The cost might run to $2 million or so, toward the ultimate goal of ensuring that wolves can restore a reasonable balance with moose and the balsam fir forest, in particular, for at least the next 20 years. That would mean a wolf population of about two dozen, the approximate average since wolves’ first known arrival on the island in the 1940s.

When the wolf numbers have been in that range, the moose herd was generally under 1,000 and sometimes way under. Since wolf predation ended a few years ago, the moose population has been going up about 20 percent per year; it is now approaching 2,000 and could double again in the next several years.

These are just some of the interesting details, from the practical to the philosophical, of NPS’ plan for  reversing the collapse of Isle Royale’s wolves once this final environmental impact statement clears a last 30-day round of public comment — and how it answers various critics, especially wilderness purists and others who say park managers should simply “let nature take its course.” (Also, the folks who urged moose control via mass shooting, contraceptives, fences or biological weapons.)

Five years ago, I will admit, I was inclined toward the purist viewpoint myself, feeling that if the hands-off requirements of the Wilderness Act of 1964 didn’t prohibit artificially manipulating wildlife in places subject to its protections, then the law had no meaning at all.

I see things differently now, not least because of what I’ve learned about the long and continuing history of human involvement with “nature” on Isle Royale. 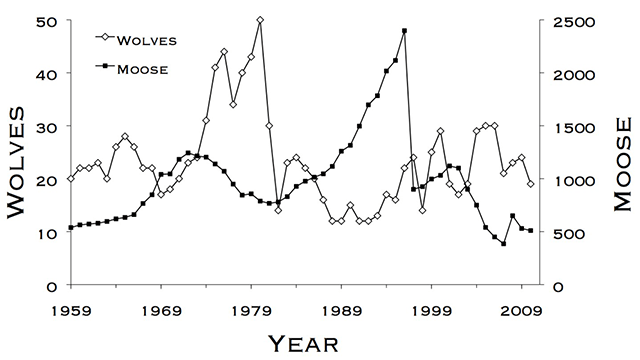 Today the park has more or less returned to the troubled conditions of the early 1940s when Aldo Leopold — a founder of The Wilderness Society and leading advocate of the 1964 act — argued that the island ecosystem’s health depended on introducing wolves for essentially the first time.

Following are excerpts from the impact statement, citations omitted, that add interesting perspective to where things stand on Isle Royale and how they got that way — with emphasis on the role played by humans all along the way, including the likelihood that a visitor who broke the no-dogs rule brought the wolves a decimating disease around 1981:

At various times prior to European settlement, the islands were used by Native Americans for mining copper, fishing, hunting, and other purposes. The first immigrants of European descent arrived on the islands around the 1830s. Copper mining and logging operations to support mining activities were active from the 1840s through the 1890s.

Almost the entire island and many of the smaller islands were disturbed by logging and mining operations prior to park establishment in 1940. Trapping and hunting also had a significant impact on park fauna and likely extirpated some species, such as the Canada lynx that occupied the island until the 1930s. Despite these influences, the island maintained much of its wilderness character.

It is commonly thought that wolf immigration initially occurred between 1948 and 1950, with individuals crossing an ice bridge approximately 15 miles long from the United States or Canadian mainland to Isle Royale. However, early reports from residents in the 1930s and 1940s state that they observed wolf movement  between the mainland and the island and saw possible signs of newly arrived individual wolves. Other than these anecdotes, there is no documentation that wolves occurred on Isle Royale before the late 1940s.

Interest in introducing (or augmenting) the wolf population on Isle Royale  in the 1940s and early 1950s resulted in the introduction of four wolves from the Detroit Zoo in 1952.  The experiment was not successful, primarily due to human habituation by the wolves. Accounts vary as to their outcome, but after an initial attempt at relocating the animals, two or three were subsequently removed, and one or two remained in the wild.

Human-induced mortality common to mainland wolf populations, such as intentional killing or vehicle collisions, does not apply to Isle Royale, given its location and wilderness status. However, human influences have affected wolves on the island. In 2011, three wolves on Isle Royale drowned in an open, flooded mine shaft, a feature from the historic 19th century copper mining on the island.

The wolf population reached its peak on the island in 1980, when 50 animals were present. However, a population decline between 1980 and 1981 reduced the number of Isle Royale wolves to 14 individuals. The main cause of the population decline was associated with outbreak of canine parvovirus but also could have been attributed to starvation, intraspecific conflict, or emigration.

Wolf populations never recovered to population levels that existed before this decline. Between January 2014 and January 2015, the wolf population decreased from nine to three, with only three wolves remaining on Isle Royale by April 2015. During that winter of 2015, an ice bridge had formed and a pair of wolves crossed the ice bridge from the Grand Portage Indian Reservation to the island. The pair returned to the mainland five days later. The six wolves that are unaccounted for may have perished, or left the island during the 2015 ice bridge event. By 2016, observations suggest there are only two wolves remaining.

During public scoping, some commenters advocated the use of hunting in the park to reduce the moose population and reduce herbivory on island vegetation. Public hunting would be inconsistent with existing laws, policies, and regulations for the park because public hunting is not allowed by federal statutory law at the park. The National Park Service is not considering a managed harvest because of the difficulty related to logistics, increased staffing requirements, removal of carcasses from the landscape, and the impacts to wilderness character.

The suggestions from public comment to manage the moose population on Isle Royale through  translocation, culling, fertility control, or biological controls, such as use of parasites or bacteria were also considered. However, these elements were dismissed on the basis that such management would not meet the purpose of and need for taking action because they would not address the population of wolves at Isle Royale and the direct management of moose is outside the scope of this plan…. Currently, there is no approved agent for fertility control in moose. The introduction of a parasite or bacteria (nonnative agent), in an effort to control the moose population is against NPS management policy.

Some commenters suggested alternative elements related to vegetation management, such as rotating where moose are able to browse and restoring vegetation, erecting protective fencing, thinning trees to be more conducive to the movement of moose and wolves, planting specific species for vegetation restoration, restoring vegetation on surrounding islands, creating seed banks, managing nonnative and invasive species, and conducting controlled burns.

The feasibility of fencing off substantial areas of the island’s vegetation is limited due to the size of the protected areas that would be required and the costs associated with installation and maintenance of fencing. Such an undertaking would be technically and financially infeasible at this time.

In the past, the immigration of wolves from the mainland of either Canada or the United States (across ice  bridges) was sufficiently frequent that there was a “genetic rescue” effect, with the new genes of the  immigrants rapidly incorporated into the population, increasing diversity (and presumably viability). In 1997, a lone male wolf crossed to Isle Royale from the mainland, resulting in a  significant increase in genetic diversity among the island wolves. Such genetic rescue  effects have been noted for other conservation priority species: panthers, sheep, birds, and snakes, as well as in other populations of wolves.

However, the Isle Royale population has declined to extremely low levels where inbreeding has affected viability of the animals. Of the 94 progeny in the pedigrees described by Hedrick et al., 42 (45%) were the result of father-daughter, mother-son, or brother-sister matings. Hedrick and Lacy report additional supporting information. By 2005, the ancestry of the Isle Royale wolves was believed to have ultimately descended from the 1997 lone immigrant male and two resident females.

Which brings to mind the inconvenient fact that a human-assisted “genetic rescue” of the Isle Royale wolves, before their numbers had declined to the vanishing point — a smaller-scale, shorter-term version of the plan now going forward — was the solution preferred by Rolf Peterson and John Vucetich, the most knowledgeable pair of researchers about the wolf/moose population dynamics on Isle Royale.

Alas, by the time NPS had worked through its process, that option was off the table. Now there is no more time to lose in getting paws on the ground, as Peterson likes to say.

It would be a serious shame if this next-best solution were delayed by purist-minded litigation arguing that human influence, having contributed so heavily to the troubles that Isle Royale finds itself in, cannot contribute reasonable relief.

At long last, Isle Royale wolf restoration could begin as early as this autumn