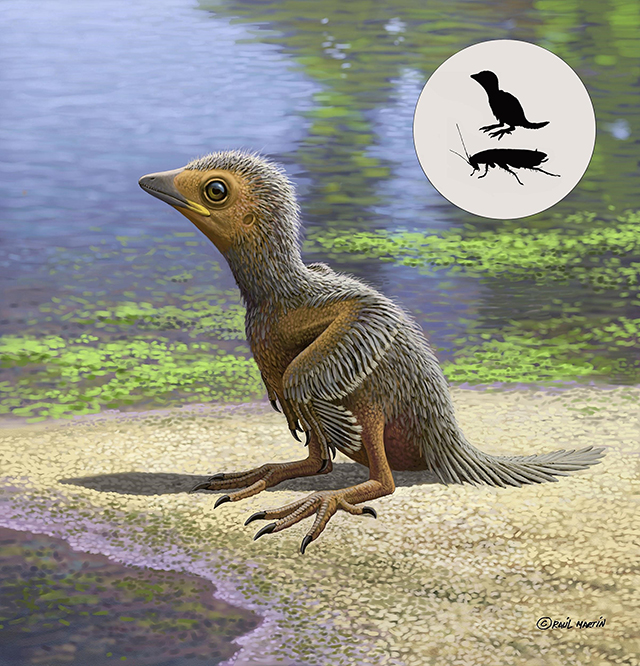 Courtesy of the Natural History Museum, Los Angeles County
The hatchling specimen belonged to a group called the Enantiornithes — the largest and most diverse bird lineage from its chapter in the dinosaur record.

If this little birdie strikes you merely as cute, have another look at the feet, with flesh-ripping claws an eagle might covet. And the matching claws at the ends of its … fingers.

Wait, wait — fingers on a bird?

Not anymore. But back in the days of feathered, flying dinosaurs, the wings did tend to end in fingers, which ended in claws. These birds also had sharp-toothed jaws, according to our rapidly expanding grasp of modern birds’ understudied ancestors. Luckily for other critters, their fierce capability was usually offset by small size.

It has been but 50 years or so since scattered discoveries began drawing serious attention to these feathered, flying members of an animal kingdom typically represented, in modern guides, by reptilian giants and the occasional duck-billed sea creature or shark. And it’s only in the last decade or so that science conducted at the crossroads of paleontology and ornithology has gained much attention in popular media.

We still know precious little about creatures like the young Enantiornithes in the rendering above, an artist’s extrapolation from new imaging of its fossilized skeleton, which was published in last week’s edition of the journal Nature Communications.

Found about a decade ago in Spain, this fossil from 120-some million years ago gave up some secrets to high-resolution examination using a particle accelerator called a synchrotron. 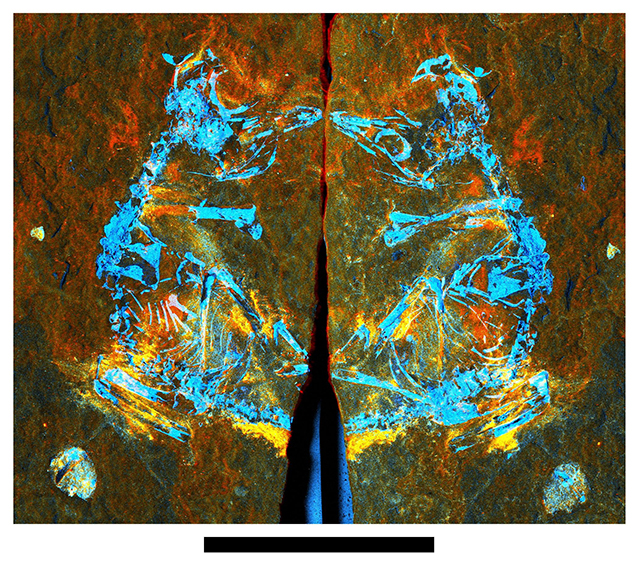 Avian dinosaurs in the Enantiornithes grouping were mostly starling-sized or smaller, so their rockbound remains are easily overlooked and usually fragmentary when found.

This specimen, a hatchling, is about the length of your little finger. The skeleton was preserved in almost complete form, which is one reason the new imaging is such a big deal. Another is that the bird actually lived until birth; a great many of the fossilized remains found so far are of birds that hadn’t yet left the egg.

And a third is that it died very young, probably from a crushed skull. As a “perinate,” whose age is within a month before or after birth, it offers a host of clues to how the skeletons and body plans of birds evolved over the whole of their history, right up to the present day.

Although species of the Enantiornithes grouping are long extinct, with no direct descendants on Earth today, other avian dinosaurs were the sole survivors in a mass extinction event — the one generally attributed to an enormous asteroid or comet — that marks the end of the 79-million-year Cretaceous period. (Other birds from dinosaur times do have descendants on earth today; sandhill cranes come to mind.)

Because it makes my head hurt to keep track of geologic time without help, I looked up this bird’s emergence by calling on a handy reference tool that conceives the whole of earth’s history as a single year.

The first fossil evidence of algae has that particular life form appearing around March 21, followed by bacteria on April 18; no multicelled animals emerge until Sept. 3. Fish, sharks and amphibians turn up in late November and early December. Then comes the Mesozoic “Age of Reptiles,” consisting of the Triassic period (starting Dec. 12), the Jurassic (on the 15th) and the Cretaceous (from the 20th to the 26th).

And what a time it was: The Cretaceous brought the earth’s first flowering plants as well as its first feathered, flying birds (the featherless pterodactyls were reptilian, and Jurassic), its first water-dwelling birds, and its first mammals, not to mention Tyrannosaurus, Triceratops and the Velociraptors made famous in “Jurassic Park” (interestingly, the latter were portrayed at many times actual size, and without the feathers most scientists believe were part of the actual body plan).

Also, early on, the Cretaceous brought the Enantiornithes, of which today’s bird’s remains are such a prized bit of residue. 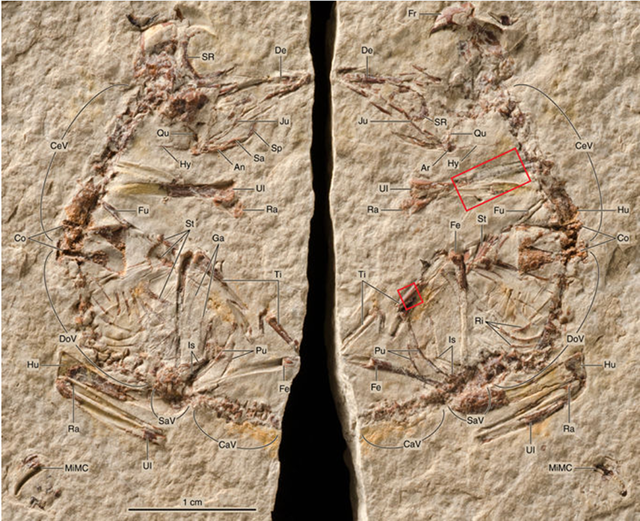 Courtesy of the Natural History Museum, Los Angeles County
Though parts of the crushed skull and the tail are missing, fossilization preserved some 30 vertebrae as well as the humerus, femur, tibia, sternum and other large bones.

The roots of the term Enantiornithes carry the senses of “backwards” and “birds,” a reference to how their bones are arranged at what you might think of as “shoulders” and the junction of “ankles” and “feet”; they come together in the reverse of your “normal” bird, not only in modern times but later periods of pre-human history. Back in the Mesozoic, though, Enantiornithes were the majority grouping, in both abundance and species diversity.

This individual is thought to have died of a crushed skull, pieces of which are missing from the fossilized remains. But there are 20-some vertebrae in the spine, plus 10 in the truncated tail, along with a sternum and ribs and plenty of familiar large bones — femur, humerus, tibia, etc. (A bunch of images with the bones labeled can be viewed in the paper; see link at end.)

The researchers’ main interest in this skeleton was in the rate and sequence of ossification, or the conversion of soft cartilage to hard bone, especially in the sternum, whose rigidity is essential to flight. In this skeleton, ossification of the sternum has begun but isn’t complete.

Such examination is key to understanding how birds evolved — and also, potentially, to understanding how capable the dinosaur birds were as they came into the world. Were these “basal avians” precocial, like the modern wild turkey and most domestic fowl — able to walk on their own and be somewhat independent from birth?

Or were they altricial, like songbirds and hawks  — emerging from the egg as lumps of fuzz with gaping mouths, dependent on parents for everything? As the paper says:

Birds are model organisms for surveying ossiﬁcation sequences: not only have they large, easily accessible eggs, but they also show a high degree of bone fusion to strengthen the skeleton, which must withstand the stress generated by ﬂight. Although bone ossiﬁcation sequences are well known in a number of extant bird species, there is a dearth of data regarding skeletogenesis in basal avians, which results from the extreme rarity of fossil avian embryos or hatchlings….

The specimen is important because it died around the time of birth: a critical stage for the examination of osteogenesis in birds. In common with modern birds, ossiﬁcation was not completed in enantiornithine hatchlings. Therefore, this perinate provides valuable insight into the spatial patterning of osteogenesis in Enantiornithes.

The detailed findings will be of interest mostly to specialists in avian anatomy, I’m guessing, but you don’t have to be in that group to be impressed generally by the discussion of how much is becoming known — and how much remains to be discovered — about the diversity of the birds among the dinosaurs, and how this relates to the diversity of the species flying all around us today.

As co-author Luis Chiappe said in an announcement of the findings by the Natural History Museum of Los Angeles County, where he directs the Dinosaur Institute, “It is amazing to realize how many of the features we see among living birds had already been developed more than 100 million years ago.”

And that simple fact might just change a bit the way you view the finches at your backyard feeder — who, if you watch for a while and ignore their diminutive size, are both voracious and more than a little fierce, even without claws at the wing tips.

News of the findings by Chiappe and colleagues happened to reach me on my smartphone, after a weekend workout, as I waited for Sallie in a little seating area by the fireplace at our health club. My eyes popped when I saw the artist’s rendering, and I thought the 4-year-old girl and her mother sitting next to me might also be impressed.

So I asked the mom if she thought her daughter would like to see a new picture of a dinosaur bird. She didn’t seem to understand. I turned the phone around for her and she leaned over to peer at the picture, then at me, suspiciously.

“There’s really no such thing as a dinosaur bird, is there?” she asked. I assured her there was. She looked again, then drew the child over to see it, too.

The full paper, “A diminutive perinate European Enantiornithes reveals an asynchronous ossiﬁcation pattern in early birds,” can be read here without charge.