Every year around mid-March the Earth Day-themed product pitches start flowing my way.

And not so long ago, some of these new goods or services seemed at least marginally thoughtful alternatives to the commonplace, with a plausible capacity to avoid waste, expand recycling or reduce pollution.

Or, best of all, to cut consumption, period — rising resource consumption being, after all, our most intractable environmental problem and the driver of most others.

One memorable example: the multi-use “paper towels” that looked just like the roll on your kitchen counter, except thicker, but were made from bamboo fiber and could be wrung and reused a dozen times or more ….

But, people, we are no longer in the era when April brings the rollout of improved fabric shopping bags, better ultra-low-watt lighting, smarter indoor composting setups  and natural cleaning products so harmless you could drink them with breakfast. And I am out of patience with manufacturers, retailers and PR shops that use eco-friendliness as a lever to move stuff that offers no significant environmental benefit.

It’s not that I’m especially loyal to the ongoing Earth Day campaign. The annual observance hasn’t been prominent on my calendar for a long time, although I do remember both the first observance in 1970, and creator Gaylord Nelson, with much fondness. Even during my decade as a Strib editorial writer — focusing on environment! — I’d often forget it was April 22 until Eric Ringham came to the morning meeting wearing a big grin and 25-year-old Earth Shoes.

Still, it rankles to see the simple, graceful notion of Earth Day — that we might pause ever so briefly to act a wee bit more kindly toward the planet — become so completely, pervasively and often farcically commercialized.

So, herewith, a representatively awful sample of the pitches from this very spring:

Your Pico Model C is a countertop home-brewing appliance that makes five liters of beer in one to two weeks more or less automatically, without requiring the brewer to learn anything about brewing.  It’s earth-friendliness claim, apart from the avoided purchase of beer in throwaway bottles or cans: the premade PicoPaks of hops and grains are packaged in compostable material. Wow.

If the idea of buying brewed beer in serving-size containers weighs heavily upon you, and recycling the empties isn’t sufficiently redeeming, I suppose you could buy your beer in a reusable large keg, or a smaller, recyclable mini-keg. Or you could brew your own in the usual low-tech way, employing perhaps a five-gallon vessel in glass or food-grade plastic. It isn’t really that difficult.

According to PicoBrew of Seattle and its publicists at LKPR Inc., the brewing ingredients contain no preservatives or artificial ingredients, but this is standard. Oh, and the gizmo can be used to brew kombucha. Which, honestly, I’d like to try someday. If the beer runs out.

The setup costs a mere $549, one measure of the natural-resource content its purchaser would not otherwise consume.

Similarly superfluous, I would say, is the “eco-friendly shaving kit made from coffee” by manufacturer Honour Essentials of Minneapolis, as pitched by its PR counselor, Cristy, also of Minneapolis.

Aw, damn. It’s not actually made from coffee — a renewable resource! — although there is a bit of coffee in the kit.

High-end is the whole point here, turning the morning shave into a “transformative ritual” with a nondisposable razor; an trio of elegant aluminum canisters containing an exfoliant rinse, shave cream and moisturizer; and 12 ounces of whole-bean coffee beans “grown, handpicked, and sorted on family-owned farmland rooted in the lush mountainous hills of Costa Rica.”

Before proceeding to mock this package, I must say I truly appreciate the notion of the morning shave as a ritual of slowing down, paying attention, taking care — or did, when I was shaving. I hate throwaway razors with a special intensity. Including my longtime compromise, a razor handle of turned wood with a brass fitting to hold the disposable cartridge.

I wear a beard now, so my shaving is limited to trimming around the edges, but I will never part with my heavy  stainless safety razor and double-edge blades, or my dad’s straight razor, or my mug with a cake of shaving soap, or the badger-hair brush that turns that soap into a rich lather to be swirled on slowly and scraped off more slowly still. It’s heaven even without a steaming cup of joe beside the sink.

So, if someday we were to find an additional Earth to colonize and exploit for its raw materials, I might think differently about the Honour system in spite of its price, which left me agape: $95 for the razor (more than twice as much as mine, but certainly not twice as good); $125 each for the three canisters (refills at $32, $36, $46), $18 for the beans.

If $500 seems steep to get started on a better morning shave, however, be comforted that you’re helping to save the planet, too, as “1% of gross revenues go to organizations that protect the environment.”

I hesitate to speak so mockingly of the next product, which is outside my personal experience, but the pitch line — “What’s the one thing you don’t want to talk about?” — grabbed my attention in its Earth Day context.

Ah-ha, I thought, now we’re going to talk about food waste, throwaway clothing, fuel-squandering vehicle use, lazy  tossing of recyclables into the trash ….

But no. This pitch is for the silicone menstruation cup, and the manufacturer VOXAPOD of Portland, Oregon, is putting it plainly:

The average woman menstruates for 38 years, tossing roughly 12,000 used disposables in her lifetime. But there is an alternative!  And it’s not as weird as you might think.  In fact, once you try it, you’ll be like, WTF, what took me so long?

This actually made a lot of sense to me, at first; I was a devotee of washable diapers when my son was born, back before Huggies won the war, and so I get the general concept of not wanting to turn all that paper and cotton into single-use products. (Also appealing — a reduction in the volume of thrown-away applicator tubes that show up as “beach whistles” where Sallie and I go kayaking.)

So I read on, and learned that VOXAPOD is still in the Kickstarter phase, raising money to bring to market an alternative that did seem to be genuinely innovative — until I learned that there are perhaps a couple of dozen such cups on the market already. What distinguishes this new one is unclear, except that the company founder finds it more comfortable. WTF?

The cup is intended to be washed and reused but it, too, is a throwaway item in the end. That’s because silicone rubber is about as recyclable as a Keurig coffee pod — theoretically the material can be reclaimed, but good luck locating someone to take it off your hands with the empty beer cans and soda bottles. Maybe you can find a place to mail it.

Then, as I recalled dumping a three-gallon load of dipes into the washer back in the day, I wondered… . Isn’t there such a thing as a washable tampon or pad? Didn’t I even know women who had used these, when disposables were still a crime? Yes and yes — in fact, there are reusable tampons that are crocheted from brightly colored yarns.

Again, I make no comment here about comparative comfort or user-friendliness, because the subject today is pitching products as environmentally preferable. And on earth-friendliness the question seems settled.

A few more products in brief: 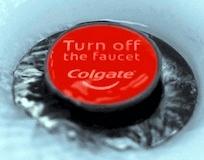 Just in time for Earth Day, a bunch of stuff to remind you how a simple idea got so completely, and farcically, commercialized