If I were a screenwriter aiming for a horror/fantasy blockbuster, I’d pass on an 8-foot-tall amphibious biped from the Amazon who possesses razor claws, a glowing hide, and the godlike powers to read humans’ minds and heal their lethal wounds.

Ditto the progressive-seeming white family in a modern-day suburban plantation, wherein they ensnare and enslave young African-American men via unspeakable surgeries. I mean, how could you build a plausible plot on such far-fetched main characters?

Better to center on, say, a mass of insect invaders — bugs  ­­— because most everything about them is not only inherently scary to the average filmgoer, but also mysterious (including the difference between insects and bugs).

Pick a six-legged alien that’s large enough to inspire fear, but small enough to infiltrate wherever it pleases, undetected until it’s too late. They’d be relentless, resistant to insecticide and — hey! — able to foul attacking humans with a skunk-like stench if captured or crushed.

The script could bring them out of the fields and into homes, through the tiniest cracks, to gather by the hundreds on drapes and bedding, hiding in cookpots, behind paintings, burrowed into books, shoes, socks, underwear ….

Just one problem. This “Invasion of the Brown Marmorated Stink Bug” would have to be a documentary. And there goes your box office.

A stowaway from Asia

The BMSB, as it is known to entomologists, farmers and exterminators, is a shield-shaped, armored-looking insect about the size of your thumbnail. If you haven’t seen many stink bugs it might appear extraterrestrial, but it’s only from east Asia, where ecosystem controls keep it from being a nuisance.

Not so much in the United States since it got here around 20 years ago. It’s impossible to know for certain just when, where and how, of course, but the first documented arrival reached Allentown, Pennsylvania, in 1996. It probably traveled in a palletized shipment of goods from China; the BMSB can’t fly or crawl very fast, but is a gifted stowaway.

It took another five years for U.S. scientists to make a positive ID, because this bug looks like several indigenous species, and in that effort the experts were helped by two of its distinguishing characteristics: the vast range of foods on which it will happily feed, and its fondness for sharing human shelter.

It feels at home in a variety of landscapes and climates, too, and though it breeds only in summer, it has no difficulty establishing large populations, indoors and out. According to a recent and remarkable piece by Kathryn Schulz of The New Yorker, “When Twenty-Six Thousand Stinkbugs Invade Your Home”:

A wildlife biologist in Maryland decided to count all the brown marmorated stinkbugs he killed in his own home; he stopped the experiment after six months and twenty-six thousand two hundred and five stinkbugs. Around the same time, entomologists documented thirty thousand stinkbugs living in a shed in Virginia no bigger than an outhouse, and four thousand in a container the size of a breadbox. In West Virginia, bank employees arrived at work one day to find an exterior wall of the building covered in an estimated million stinkbugs.

What makes the brown marmorated stinkbug unique, though, is not just its tendency to congregate in extremely large numbers but the fact that it boasts a peculiar and unwelcome kind of versatility. Very few household pests destroy crops; fleas and bedbugs are nightmarish, but not if you’re a field of corn. Conversely, very few agricultural pests pose a problem indoors; you’ll seldom hear of people confronting a swarm of boll weevils in their bedroom. But the brown marmorated stinkbug has made a name for itself by simultaneously threatening millions of acres of American farmland and grossing out the occupants of millions of American homes. The saga of how it got here, what it’s doing here, and what we’re doing about it is part dystopic and part tragicomic, part qualified success story and part cautionary tale. If you have never met its main character, I assure you: you will soon.

According to StopBMSB.org, a public education effort funded by the U.S. Department of Agriculture, the bug has been found in 44 states, including Minnesota, and four Canadian provinces. It has also spread to a dozen countries in Europe, as well as Chile.

Although the worst infestations so far have been in the mid-Atlantic states, that may have less to do with latitude and climate than that the bugs have had a few more years to settle in; Michigan’s fruit growers are in a bit of a panic just now.

According to the Halyomorpha halys page on the website of the Minnesota Department of Agriculture (MDA), the bug has been documented in Minnesota since 2010, has established reproducing populations in several parts of the Twin Cities metro area, and showed a substantial increase in numbers from 2015 to 2016.

In Wisconsin, the bugs’ presence has been confirmed in 11 southeastern counties and is suspected in two others, including Polk County, on the Minnesota border and just a bit north of the metro. 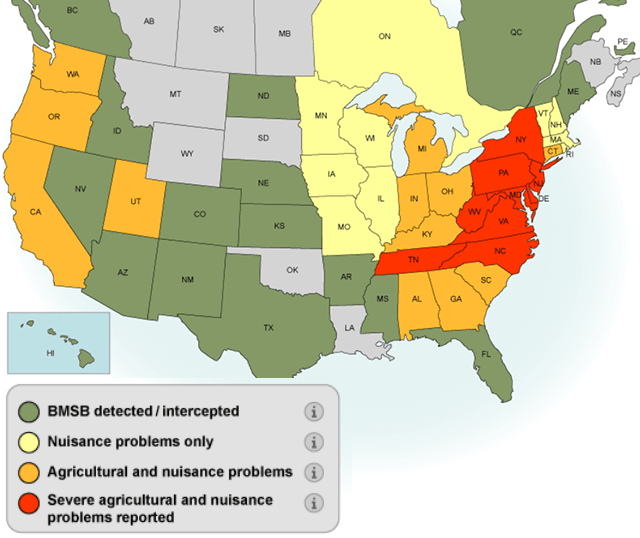 According to Angie Ambourn, the entomologist who keeps tabs on the stink bug for MDA, the species has caused no significant harm to crops yet, and scattered home invasions have involved “10 or 20, 30, 40” bugs, not thousands. So far.

But outbreak patterns elsewhere have been unpredictable, so the future hereabouts is highly uncertain.

I asked Ambourn if she happened to know the details of the first documented Minnesota arrival and she said, possibly with a slight chuckle, that she did: “It came here in a FedEx box.”

And the recipient? “The Department of Agriculture.”

She had, of course, and enjoyed it, and didn’t find anything wrong or wrong-headed in it — while emphasizing that the stink bug situation “varies a lot with the location where you’re looking at it. Out east, they’ve had it so much worse than we do.”

(Naming style varies, too: Schulz’s magazine prefers “stinkbug” while nearly every other published source writes it “stink bug”; if Richmond’s E.A. Poe were around and writing about it today, and I like to think he’d be interested, he’d probably opt for “The Stink-Bug.”)

So let us turn to a few more factually dense excerpts that define the BMSB and its havoc as experienced elsewhere.

Skunks stink, too — but outdoors

Although skunks, vultures, honey badgers and other animals defend themselves with stenches they spray, vomit or otherwise emit when attacked, “none of them do so in your home.”

Slightly less noxious but vastly more pervasive, the smell of the brown marmorated stinkbug is often likened to that of cilantro, chiefly because the same chemical is present in both. In reality, stinkbugs smell like cilantro only in the way that rancid cilantro-mutton stew smells like cilantro, which is to say, they do not…. Pam Stone compared their actual smell to the ammonia-and-sulfur stench that suffuses the air outside paper mills. Others have likened it to everything from rotten fruit to filthy socks. A for effort. In fact, the smell produced by a stinkbug is dusty, fetid, lingering, and analogy-proof.

So far, scientists have discovered more than two hundred and fifty plants that the brown marmorated stinkbug will consume. Together, those plants represent every major agricultural and horticultural sector of the American economy: vegetables, fruit trees, berries, nuts, ornamental plants, and row crops, including sweet corn, cotton, soybeans, and virtually every other legume.

What makes the brown marmorated stinkbug so impressively omnivorous is also what makes it a bug. Technically speaking, bugs are not synonymous with insects but are a subset of them: those which possess mouthparts that pierce and suck (as opposed to, say, caterpillars and termites, whose mouths are built, like ours, to chew). Yet even among those insects which share its basic physiology, the stinkbug is an outlier; Michael Raupp, an entomologist at the University of Maryland, described its host range as “huge, huge, wildly huge. You’re right up there now with the big guys, with gypsy moths and Japanese beetles.”

Crop losses to the stink bug are easier to illustrate than to aggregate, because there is no centralized reporting system.

So far, the biggest losses have been suffered by fruit growers; the bugs’ bite creates scars that make apples, peaches and other produce too ugly for market; often, the surface damage is also an indicator of rot within. An oft-cited figure is that apple growers in the mid-Atlantic states reported $37 million in losses just in the 2010 season, but that example exists only because USDA happened to take a survey.

Corn and soybeans are also attacked by the bug, but the outlook for these is complicated. According to StopBMSB.org, damage to sweet corn and edamame is considered a serious problem, again because of the disfigurement factor.

Infestations in field corn, and in soybeans grown for feed or processing, are of concern mostly because those plants host bugs that will go on to attack fruits and vegetables that are sold whole, as well as ornamental trees and shrubs — and the at-risk list is long:

Tomorrow: More about the stink bug’s presence, history and outlook in Minnesota, and the problems facing farmers and homeowners who seek to control it.